The Okanogan County Fairgrounds has been transformed into a hub to treat livestock and animals injured in the massive blaze. 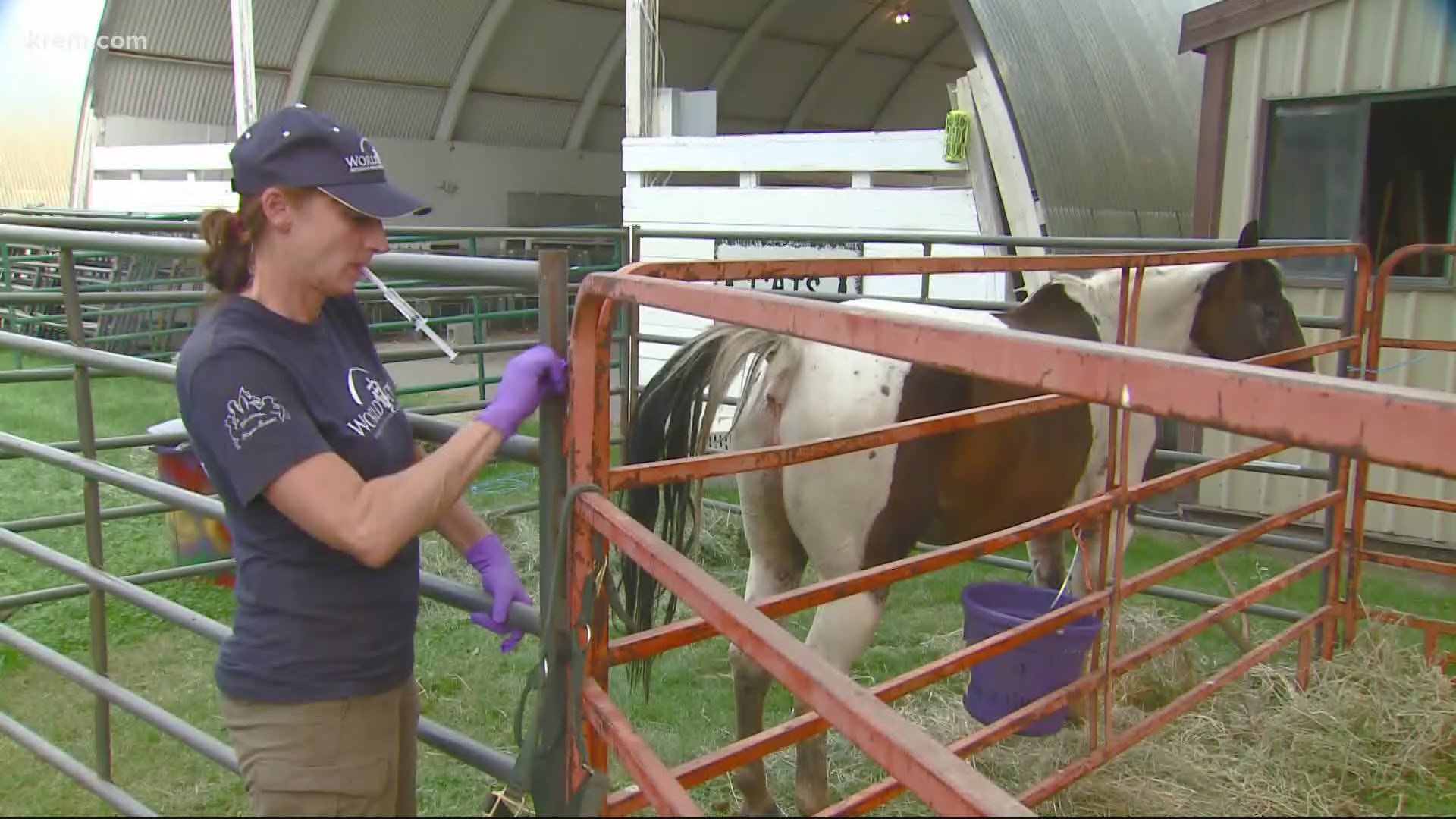 OKANOGAN COUNTY, Wash. — As fire crews continue mop up efforts on the massive Cold Springs Fire in Okanogan County, work is also continuing for volunteer veterinarians and fairgrounds staff who have been tasked with looking after livestock impacted by the fire.

The Okanogan County Fairgrounds, it would turn out, transformed into a hub for all things related to caring for livestock and animals since the fire began over Labor Day Weekend.

"These people need immediate housing for their animals. We need to treat hurt animals," said fairgrounds manager Naomie Peasley on Wednesday, taking a break from a busy schedule full of meetings and phone calls tied to relief efforts. "We need immediate relief now."

At one point, the fairgrounds were home to about 60 animals that were evacuated from the Cold Springs fire zone or were in need of medical treatment.

"We had it all. Horses, chickens, turkeys, goats, mini horses," said Peasley, describing a "constant flood" of animals that were coming in and out of the fairgrounds over the last week.

As of Wednesday, seven horses were still being kept at the fairgrounds as volunteers tended to the animals' burns or damaged lungs.

"It's tough," said Dana Westerman, a veterinarian from Western Washington who was donating her time through the organization World Vets. "The animals are their lives, the farmer's and rancher's lives."

Westerman and colleagues were tending to a trio of burned horses that were rescued from the fire zone. In addition to administering pain medication and antibiotics, Westerman and volunteers applied a topical balm to burns on the horses.

Around half a dozen other horses that belonged to the same owner didn't survive the blaze.

Westerman added that she and other volunteers have also assisted ranchers with locating and treating cattle in the Cold Springs fire area. According to Peasley, many landowners are still attempting to count how many animals they lost during the fire.

The Okanogan County community has stepped up to the task of assisting impacted ranchers and animals, however.

Peasley noted that the fairgrounds have been flooded with donations, including pet food and hay. In one building, volunteers had stacked various types of animal feed halfway up the walls.

"It was absolutely overwhelming," said Peasley of the community's generosity. "For all of us here, we're kind of burning both ends of the candlestick. It's super emotional, exhausted."

Peasley noted that the fairgrounds had received plenty of donations, including animal feed, but was still in desperate need of hay.

"We need hay now. Most of these ranchers lost everything," she said.

In addition to hay, Peasley also issued a plea for fencing that can be passed along to ranchers.

Regarding other donations, fire officials on Wednesday noted that "donation centers in the area are now full" and items were being distributed.