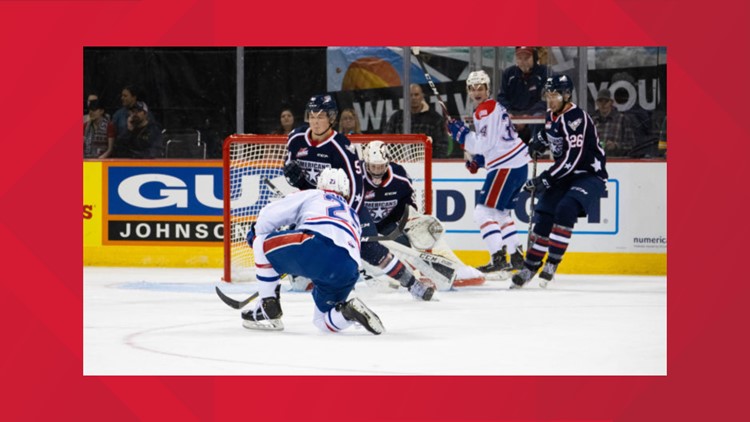 SPOKANE, Wash — The opening weekend was, for the most part anyway, a successful one for the Chiefs as they had garnered three of the four points they could muster on their two game road trip to Kamloops and Kelowna. While the weekend had ended with a disappointing overtime loss at the horn in Kelowna, the team got a full week to practice and prepare for their home opener the following Saturday at Tri City. During the week, the Chiefs made some roster moves to meet deadlines for their limit of three overage and two import players. First the team traded forward Ethan McIndoe to Edmonton to reach the overage limit as the club has their three 20 year olds in forward Jake McGrew and defensemen Noah King and Filip Kral. The Chiefs then released import defenseman Matvei Startsev to keep Kral and goalie Lukas Parik as their two import players. It's the first time in my over 20 years of covering the team Spokane has kept a 20 year old import player like Kral, as they take up 2 spots in the overage and import numbers. Kral is too good to deal away though, as he'll be valuable on the back end not just defensively, but on the team's power play. Spokane is still waiting for Ty Smith to return from New Jersey in the NHL, but all indications are he will be back in a Chiefs uniform sooner than later.

Spokane had just one game to prepare for this past week, as they hosted the rival Tri City Americans in their home opener on Saturday. The Ams were off to a 2-1 start after winning in Seattle the night before and were sitting one point ahead of the Chiefs in the standings heading into their first of 12 meetings this season. After the lengthy pre-game ceremonies, the Chiefs came out peppering Tri City goalie Beck Warm, as Spokane put up 13 shots in the first period. Unfortunately, the Chiefs were unable to find the net as the two teams went through the first 20 minutes scoreless. The second period would see the game turn the other direction against the Chiefs as Tri City got 3 power play chances in the stanza. The Americans would convert the first one just over 6.5 minutes in to take a 1-0 lead. Tri then scored on their third opportunity with just 1:20 left in the second to take a 2-0 lead after two.

The Chiefs chances of a third period comeback came to an end just over 3 minutes in as the Americans scored their first even strength goal of the night to take a 3-0 lead. Spokane would out shoot Tri City 13-7 in the period and 38-23 in the game, but Warm turned away every chance for the Chiefs and Spokane would be shut out for the first time this season 3-0. Special teams were the difference as the Chiefs went 0-4 on the power play and just 2-4 on the penalty kill. After leading the league last season, Spokane is now a league worst 1 for 12 on the power play in their first 3 games. Equally as concerning is Spokane's penalty kill, which is also at the bottom of the WHL at 6 for 11 through three contests. When you rank at the bottom in both the power play and penalty kill, winning is tough to come by, so the Chiefs are fortunate to have 3 out of the 6 points they had the chance to earn thus far.

There's no doubt the special teams will have to get a lot better for Spokane, and in a hurry, as the Chiefs will have a demanding three games in three nights stretch coming up this weekend as they host Seattle Friday, travel to Tri City Saturday and then entertain Everett on Sunday. All the games are within the U.S. Division, so it will be key for Spokane to pick up some points to stay in the race, as an empty weekend would put the team in a huge hole to dig out of just three weeks into the season. Conversely, winning 2 or 3 will put the club right at the top of the standings and jump start the team into the first full month of the 2019-20 campaign. I'll have the call on 1510 AM KGA and 103.5 FM the Game with the pre-game shows on Friday and Saturday at 6:30 pm and the puck drops at 7:05 pm. Sunday's game with Everett will be a 4:30 pm pre-game and a 5:05 start. Let's hope the club bounces back from their home opening disappointment and get some momentum going in the right direction. We hope to see you at the rink!

RELATED: Chiefs forward Adam Beckman talks being drafted to NHL and developing for the pros

The following video is a report on the Spokane Chiefs new head coach Manny Viveiros.