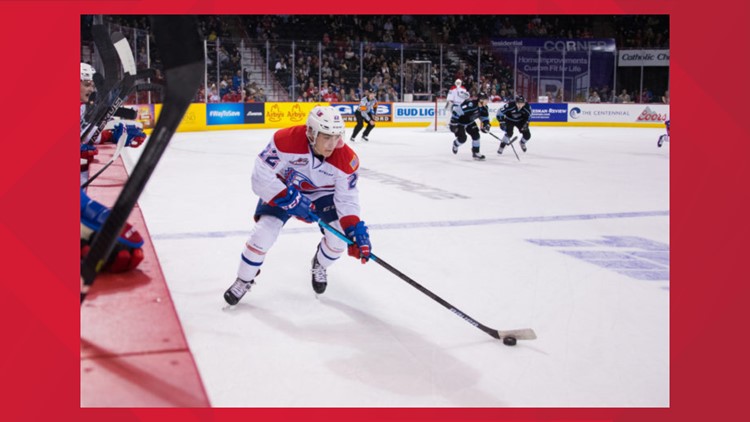 BRITISH COLUMBIA, Canada — Off seasons seem to get shorter...or is it, Chiefs seasons seem to get longer? Either way you look at it, another Spokane Chiefs season is upon us and I'm just having a hard time comprehending this will be year number 19 for me. It just doesn't seem that long ago I got on the bus for the first time with the guys to head to the East Division and get my first taste of the prairies. This season, the team is opening up on the road in British Columbia as they had back to back meetings with Kamloops and Kelowna. Spokane has opened in Prince George before, but has never done a back to back in B.C. against two teams to start a season. The nice thing is that I know the weather is going to be great. I was just hoping the hockey would be just as good.

The Chiefs got some good news right before the road swing when they found out that forwards Jake McGrew and Eli Zummack, defenseman Filip Kral, and goalie Lukas Parik were all coming back from NHL training camps in time to join the club for the opening weekend. With Adam Beckman returning earlier in the week, the team would be missing just defenseman Ty Smith to start the year, which was a big boost as they took on a Kamloops team that had gone unbeaten in the pre-season at 7-0. The Blazers were also ranked fifth in the first CHL poll of the year, the highest of any Western Conference squad coming into the season. The weekend would also mark the debut of Head Coach Manny Viveiros, who took over for Dan Lambert after he took a job with Nashville in the NHL.

As expected, the Blazers came out putting pressure on the Chiefs as Kamloops put up 15 shots on Parik in the opening 20 minutes. Parik turned away all but one, as the Blazers scored with just 42 seconds left in the period to take a 1-0 lead. Spokane countered right back though, as Jake McGrew scored just 15 seconds later to equalize the game at 1 heading into the second. The Chiefs used that momentum to take their first lead 2:30 minutes into the second when Connor Gabruch scored on a rebound to make it 2-1. Spokane then had a 5 minute power play, but failed to score as part of an 0 for 6 night on the man advantage, and Kamloops took advantage. The Blazers scored less than 2 minutes later to tie the game at two. The Chiefs then scored late in the second straight period, as Luke Toporowski roared in on a partial breakaway and scored with 1:04 remaining in the stanza to give Spokane a 3-2 lead heading into the third.

Kamloops would tie the game midway through the third on a re-direct past Parik, but the celebration was cut short when McGrew scored his second of the night, this time only 17 seconds after the tying goal, to put Spokane up for good at 4-3. The Chiefs killed a Kamloops power play in the final minutes and came away with an opening night win against a very good Blazers squad. Spokane out shot Kamloops 37-34 and went a perfect 3-3 on the penalty kill as the top line of McGrew, Eli Zummack and Beckman combined for 6 points on the night. Spokane hoped to make it a 2 for 2 weekend as they headed down the road to Kelowna to take on the Rockets in their season opener the next night.

The Chiefs put Campbell Arnold in net in his first WHL start against the Rockets. Spokane's offense was fairly dormant in the first period, managing just 5 shots on goal, as Kelowna scored on its' first power play to go up 1-0 after one. Spokane got things going in the second period when McGrew scored his third goal in 2 nights midway through the stanza to tie the game at one. Michael King then put home a rebound of his own shot late in the second to give the Chiefs the lead at 2-1. Arnold then made two spectacular saves in the final seconds to keep it a 2-1 lead after two. In the third, Kelowna scored their second power play goal early to even the contest at two. Spokane had just 2 power plays all game, but capitalized on their last one when Filip Kral scored at 14:39 to put the Chiefs up 3-2. The lead would disappear though when Kelowna scored their 3rd power play tally with just 1:28 left to send the game to overtime tied at 3. The game appeared heading for a shootout but in the waning seconds, the Rockets slipped the puck under Arnold just before the clock hit zero and Kelowna skated away with a 4-3 overtime win.

It was a disappointing way to end the opening weekend, but the Chiefs came away with 3 of the 4 points to start the season. The power play did score in its' final opportunity, but went 1-8 the first two games. After a 3-3 start on the penalty kill, Spokane was just 1-4 against Kelowna. The offense was up and down, which happens a lot in the beginning of the season, while the defense was solid overall. The goaltending from Arnold and Parik was good, so there's reason for optimism on how the Chiefs will fare between the pipes this season. The team now gets a week to work out the kinks, especially on special teams, so that's good news for the club. Spokane has just one game this week as they open their home campaign by hosting Tri City Saturday at 7:05 pm. I'll have the call on 103.5 FM the Game and 1510 KGA starting with the pre-game show at 6:30 pm. We look forward to seeing you at the rink!