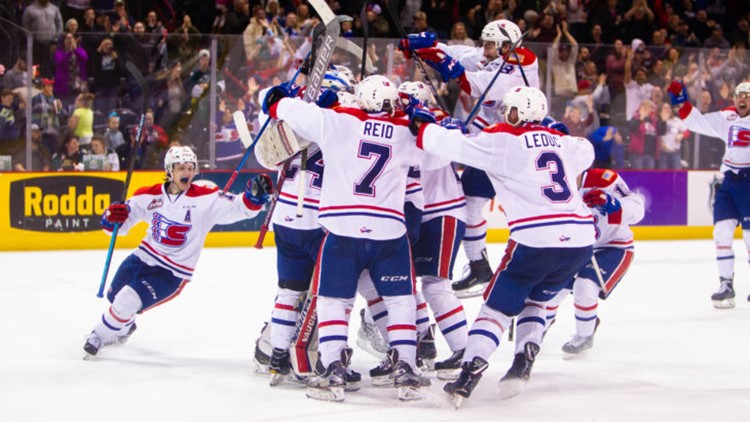 SPOKANE, Wash — I look back at the photo attached to this blog and it brings back a huge smile to my face as the Chiefs celebrated advancing to the Western Conference Finals with a 5 game series win over favored Everett last season. It was the high point of a fun season for Spokane and as the team enters its' 35th season in franchise history. Last year will hopefully serve as a springboard for even better things for the club. While this year's outfit will return a number of key players, there will be a lot of change for the club heading into this season. It starts on the bench as the Chiefs saw both Head Coach Dan Lambert and Assistant Scott Burt depart for Nashville in the NHL and Idaho in the ECHL. Taking over are Head Coach Manny Viveiros, who spent a year with the Edmonton Oilers after leading Swift Current to the WHL title in 2017, and Assistant Coach Adam Maglio, who comes from Prince George in the BCHL. No question there will be an adjustment period between the philosophy Viveiros will want the club to play and the players trying to implement it, but with a lot of veteran performers back from last year, the window of adjustment should be a relatively short one.

While the club will return most of their top scorers from last season, they did lose their top scorer Riley Woods to graduation, as well as Luc Smith and Nolan Reid. They were the strongest group of 20 year-olds the team enjoyed in 8 years, which was also the last time the club made the West Finals. Who will step up and fill those roles will be a big question in the early weeks of the season. Right now, the Chiefs have five 20 year-olds on the roster and the club can only carry three past October 10th. The club let go of a couple potential 20 year-olds in the off-season, including last year's starting goalie, Bailey Brkin and forward Kaden Hanas. Last year's back up goalie Reece Klassen is also a 20 this season, but his status is very much up in the air with the off season drafting of L.A. Kings third round pick Lukas Parik and the emergence of Campbell Arnold. Parik has just been sent back to Spokane from the Kings and figures to be the #1 guy. The chances of Klassen sticking as a back up in that case is slim, giving Arnold the chance to seize that role, and based on his pre-season play, Arnold looks to be the guy.

The back end is a little more complicated. The status of Ty Smith is very much up in air as to whether the New Jersey Devils will return him for his final season of junior hockey or keep the 19 year-old defenseman in the NHL. New Jersey has been very patient with defensemen in the past, but there's no question that at minimum, the Chiefs won't get Smith back until late October or even early November as the Devils will give him a long look on the blue line. It's my guess Spokane will get him back, but the club will have to have some guys step up in Smith's roles on special teams with the power play and penalty kill. That leads us to Filip Kral, who has been returned by the Toronto Maple Leafs to the Chiefs. It's a major boost for Spokane as Kral can take up a lot of those minutes vacated by Smith on special teams. The question for Spokane is does the club eat up both a 20 year-old spot and one of the two import spots by keeping Kral? When faced with that same question a few years back with Dominic Zwerger, the Chiefs traded him to Everett to free up both spots. In my 18 previous seasons with the Chiefs and in my 21 covering the team, Spokane has never kept a 20 year-old import. Kral may prove to be the exception though as he would be invaluable if the Chiefs don't get Smith back.

With the loss of Reid to graduation, the club will count on 20 year-old Noah King to solidify what will otherwise be a young defense. Bobby Russell and Matt Leduc will be looked upon to take the next steps in their development, although both have battled injuries in the pre-season. Their ability to give quality minutes on a nightly basis will go a long ways towards whether the Chiefs make the same progress in the playoffs as they did last year. Luke Gallagher is back after playing a half season with the Chiefs last year, while former #1 pick Graham Sward will be expected to play top 6 minutes on a nightly basis in his rookie season. Jordan Chudley, who was acquired from Winnipeg in the off-season will probably be the other D-man to fill out the rotation. Obviously, if Smith returns to Spokane, and Kral stays with the Chiefs, the defense will be one of the best in the league.

Up front, the Chiefs will have a couple more question marks early in the campaign. Last year's second leading goal scorer, 20 year-old Jake McGrew is expected to be returned by San Jose to Spokane. With another 20 year-old, Ethan McIndoe, expected back from injury in October, Spokane will have to make a decision on which player to keep going forward. It won't be an easy decision as both were valuable up front last season. The Chiefs return a lot of firepower and depth at the forward spots this year, led by last year's leading goal scorer, Adam Beckman. The 3rd round pick of the Minnesota Wild has just returned from NHL camp and looks to take the next step on improving his 32 goal performance from 2019. Eli Zummack is back for his 19 year-old season, and looks to continue his upward trend in the scoring column after improving 27 points from his previous year last season. Luke Toporowski, disappointed in not being drafted last year, hopes to use that as motivation going into this season. Veteran Michael King is back for his 19 year-old season, while last year rookie crop of Jack Finley, Cordel Larson, Connor Gabruch, and Eric Atchison will be looked upon to take the next steps up in their production this year. Bear Hughes and Owen MacNeil, who both saw some action last year, will now be counted on for regular minutes and to bring some valuable contribution nightly for a forward group that will be expected to carry the team early. Rookies Grady Lane, Blake Swetlikoff, Brandon Reller and Reed Jacobsen will fight it out for the extra minutes that will be hard to come by in the fierce competition for ice time.

The schedule is very favorable for Spokane in the early part of the season, as the Chiefs have just 9 road games until December. Two of those will come in the opening weekend of the year, as the club travels to Kamloops and Kelowna this Friday and Saturday nights. It will be a good test for the young players to see what the Western Hockey League is all about and will be an opportunity for the veterans to start getting their games back to the levels they're accustomed. The games are less frequent early in the year, but there will be plenty of practice time for the Chiefs to get used to the new systems. For the 19th straight season, I'll have the call of every Chiefs game this year. All the games will be on 103.5 FM the Game and 1510 AM KGA, with the exception of conflicts with Gonzaga basketball games, in which case, the Chiefs will be on 94.1 FM the Bear. This weekend's games will be on 103.5 and 1510 with the pre-game shows at 6:30 pm and the puck drops at 7 pm. It's hockey season again and we hope to see you at the rink!

RELATED: Chiefs forward Adam Beckman talks being drafted to NHL and developing for the pros