This isn't the first time that Gonzaga fans have set fire to furniture during March Madness either. 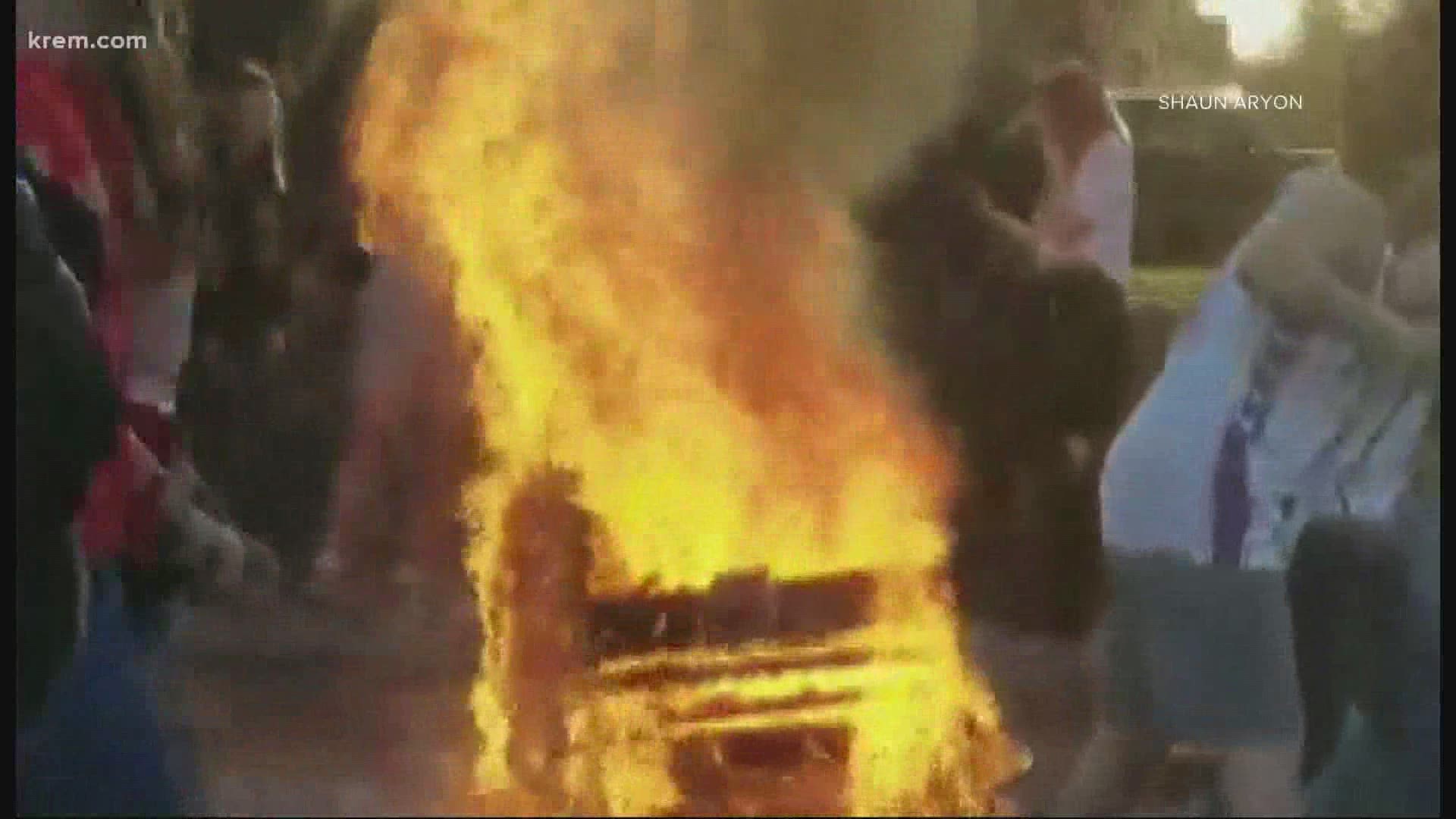 SPOKANE, Wash. — Hundreds of Gonzaga students took to the streets of the Logan Neighborhood on Tuesday to celebrate the men's basketball team's win over the University of Southern California in the Elite 8 and their gatherings included burning furniture.

The Bulldogs secured a spot in the Final Four after an 85-66 win over the Trojans. Sophomore forward Drew Timme had a dominant performance and led all scorers with 23 points, with senior forward Corey Kispert and freshman guard Jalen Suggs both adding 18 of their own.

This isn't the first time, though, that Gonzaga fans have set fire to furniture during March Madness. In 2017, couches and a mattress were set ablaze to celebrate a Gonzaga basketball win. Spokane Fire officials reminded people that this was in fact a crime.

Gonzaga University President Thayne McCulloh said in a tweet after the Zags' most recent win on Tuesday that "non-compliance" with the Spokane Police Department and GU Campus Security and Public Safety is "unlawful and completely unacceptable." He added that Gonzaga "must support law enforcement" in its efforts and told fans to move celebrations "back into compliance."

The University is conducting an investigation into the events and will follow Gonzaga’s Student Code of Conduct processes. Should a student or students be found responsible for violations of the Student Code of Conduct, they will be subject to appropriate disciplinary action. Importantly, FERPA (Family Educational Rights and Privacy Act) laws prohibit Gonzaga from discussing specific conduct matters. As always, Gonzaga will continue to emphasize the importance of students following COVID-19 guidelines.

Spokane police responded to numerous calls about a large party and a couch set on fire in the area of 800 E. Nora Avenue just after 6:30 p.m. on Tuesday, Spokane Police Officer John O'Brien said. A patrol officer who responded to the area said about 400 students were gathered there.

A video taken by Shaun Aryon shows a large group of students, most of whom were not wearing masks, standing around a burning couch in the Logan neighborhood before some tried to douse the flames with water. Another video that Aryon shared with KREM shows students cheering and running through the streets.

"I'd like to say that those students were cooperative with the police department, they were courteous, but it was a very large group and we did have a couch fire," Officer O'Brien said of the large gathering. "A decision was made to activate a portion of our Civil Disturbance Unit in case it was needed to help disperse the party."

The "mere presence alone" of the officers helped to deescalate the situation and the group broke up on its own and left the area, O'Brien said.

Spokane police did not arrest anyone during the celebrations on Tuesday but they did respond to "multiple couch fires," SPD spokesperson Julie Humphreys said. She added that gatherings were "peaceful for the most part and students were cooperative with officers."

"As Gonzaga advances in the Final Four with Saturday evening’s game, SPD is hopeful students and the community alike will celebrate our hometown team in a safe and respectful manner," she wrote in a statement.

"As Gonzaga University celebrates the accomplishments of our men’s basketball team, we are aware that some of our students are engaging in spontaneous celebrations, social gatherings, and other actions that could put them and the wider community at risk during this pandemic. The excitement of the moment is no excuse for unsafe behavior.

We will continue to communicate with our students about safe practices and the potential consequences of their actions. We’ve urged our students, staff, faculty and visitors to rededicate themselves to the protocols followed throughout the academic year including mandatory masks, social distancing, and safe outdoor gatherings.

In anticipation of the Final Four this weekend, Gonzaga is working to offer venues in which students can gather safely and share their spirit for the team."