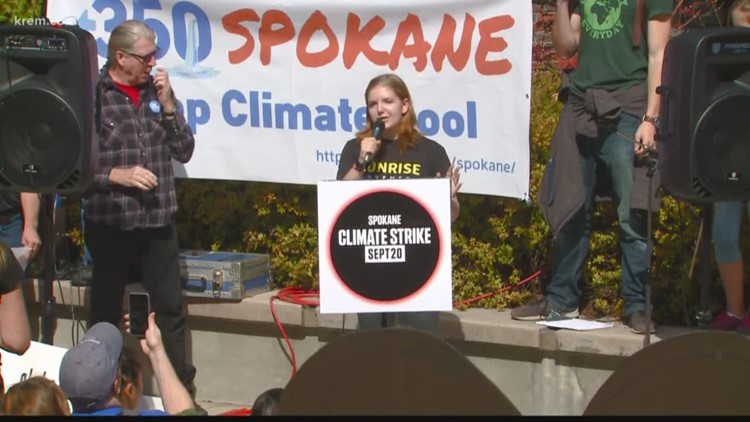 SPOKANE, Wash. — EDITOR'S NOTE: This article originally included a statement from Nadine Woodward's campaign manager saying "Environmental policies are a more of a state and national issue, rather than municipal." That statement was removed once it was clarified that it was not on behalf of the candidate.

On Friday, downtown Spokane was flooded by a student-led march calling for action on the issue of climate change.

We asked the candidates running for mayor and council president what Spokane city government should do to address environmental issues.

Mayoral candidate Ben Stuckart said he marched with the students on Friday.

He believes climate change should be a top priority for Spokane and says he'd make it so as mayor.

"The Office of Sustainability will be a cabinet level position on day one," he said.

One of his next objectives is addressing climate, as well as housing, through increased density.

"You might think to yourself gas powered cars are the biggest cause of climate change and that's just not true, it's how we live," said Stuckart. "And that's why I've been a consistent advocate for denser housing around our centers and corridors."

The Woodward campaign provided a statement on the topic: "One of our region's best assets is the abundance of natural resources and we want to make Spokane attractive to businesses who value green energy."

Council president candidate Cindy Wendle said in a statement: "It was a historic day for youth who gathered, bringing awareness to a very important issue.  Protecting our environment isn't good enough, we need to leave our environment in a better place than we found it."

When asked for a specific policy, Wendle cited cleaning up the Spokane River.

That email applauded the student response and said: "we have to do our part to minimize rising emissions, and simultaneously use the opportunity to create green jobs and a stronger economy that works for everyone."

The general election is on November 5th.