Residents of Malden and Pine City will be allowed back into their towns on Wednesday to assess the wildfire damage to their homes and community. 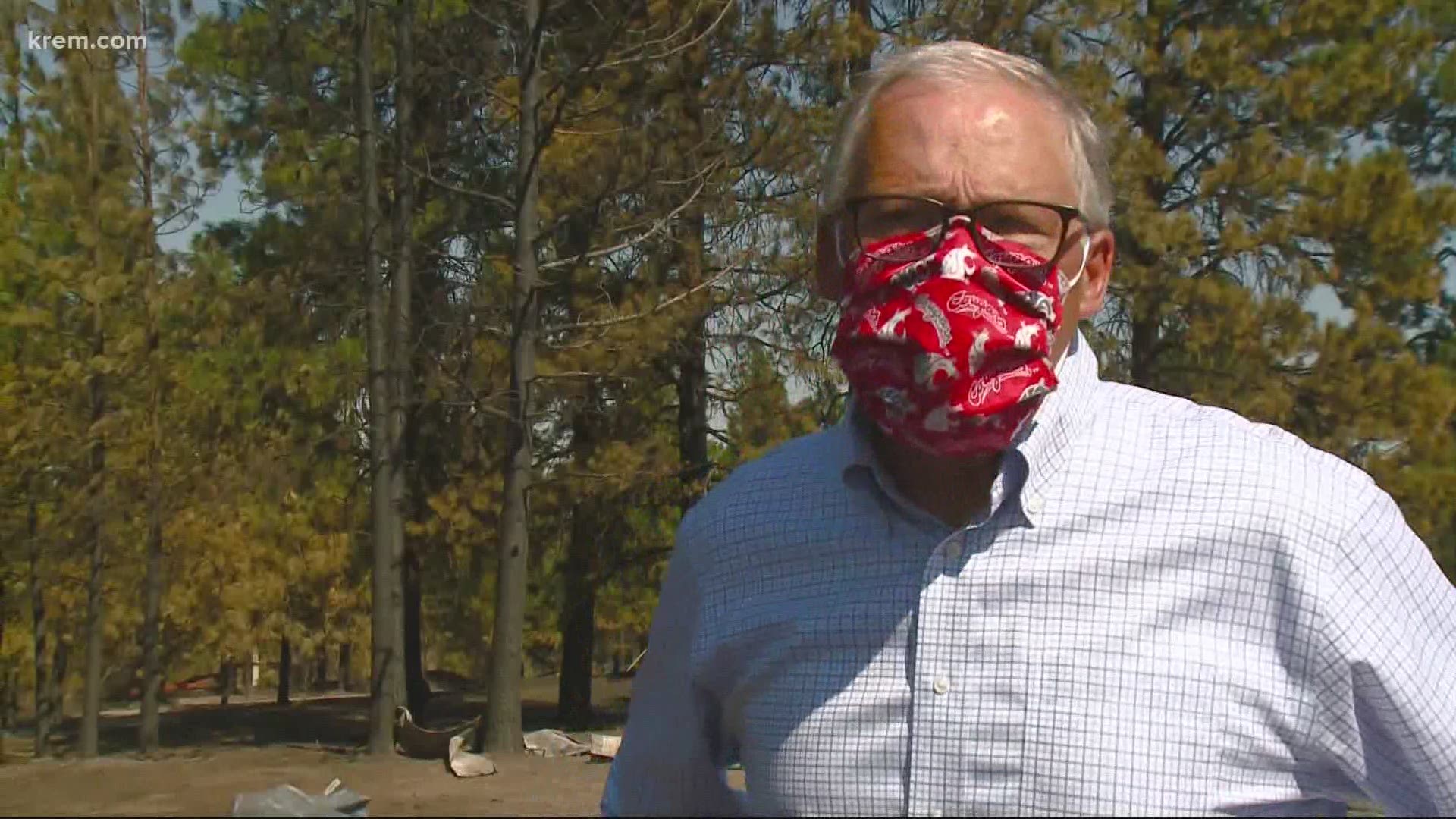 MALDEN, Wash. — The Babb/Malden Fire is burning 15,266 acres since it sparked at about noon on Labor Day. It is 90% contained as of Monday morning.

Pine City-Malden Road is currently closed from the west side of Pine City to the eastside of Malden to the public. The communities of St. John, Sunset, Thornton and Ewan are under Level 1 Evacuation orders, according to the Northwest Incident Management Team 10.

Three fires in Whitman County have burned more than 20,000 acres since Labor Day, leaving destruction in their wake. Most of the buildings in the towns of Malden and Pine City, which were in the path of fires, are gone.

During a press conference on Tuesday, Gov. Jay Inslee called the destruction in Malden one of the most "traumatic events," and added that the town's mayor told him that "it looked like a bomb had gone off." Commissioner of Public Lands Hillary Franz, who also visited Malden on Wednesday to survey the damage, described the situation as "unimaginable."

Inslee met with local first responders, law enforcement and residents in Malden at 11 a.m. on Thursday and touring the impacted area. He is also traveling to Pullman to meet with Washington State University and city leaders on local COVID-19 spread.

Inslee vowed to help the city get back on its feet. He met with the mayor and sheriff to discuss what will be needed first, like food, shelter and communications. They also wanted the governor to understand how the state can help with what will come next.

"Second, we know we need to do whatever we can to help both local and state firefighting assets," Inslee said. "And we know that these expenses are going to be considerable for the local communities and the state's going to have to step up and help replace some of the local dollars that have been expanded, extended in these firefighters."

Inslee stressed that Washingtonians need to be extremely careful during this time because trees and grass are drier than the state has seen before. Inslee said the conditions right now are explosive due to a lack of humidity, and the high heat and wind.

Public Lands Commissioner for the Department of Natural Resources Hilary Franz met with Malden Mayor Chris Ferrell to tour the damage to the town on Wednesday.

It was an emotional visit as they stopped several times to pause and take in the devastation.

“The story on Malden is the story of almost every community on the front line of fire in this state," Franz said. "What it needs is, first—much of these resources are volunteer firefighters. Twenty-plus firefighters in this community are all volunteer. Many of them are probably aging and we don’t have the next bench. We need more fire fighting resources, even at just a regional level, that can come in."

"So it’s not just Malden, but the communities around here. They have one fire truck, correct? One fire engine that’s older and obviously lost and we’re going to work to get a fire engine in," she continued.

Franz said DNR was prepared for these fires but the pandemic has made it more difficult.

"COVID has limited the ability of movement outside of countries," Franz said. "Canada, we've shared our resources there as well. So COVID has hampered our full ability to get resources."

The commissioner reassured Ferrell that DNR will be sending the town more resources.

Only eight out of 20 homes in Pine City are still standing, according to KREM's Amanda Roley.

Residents of Malden and Pine City were allowed back into their towns on Wednesday afternoon to assess the damage to their homes and community, according to the Whitman County Sheriff's office.

Crews have gained the upper hand on local fires that continue to burn in the area, making it safe enough for residents to come back. The sheriff's office asked that nonresidents and nonessential personnel stay out of the area for the next few days.

Scott and Heather Carlton lived in a historic 1929 home in Pine City. At about 2 p.m. on Monday, Scott saw smoke coming from Malden.

"Didn't think much off it," Scott Carlton said. "But half hour later, fire officials came in on speakers saying evacuate now."

The family grabbed a few belongings and their two poodles.

"Less than 24 hours ago we had a beautiful house here," Carlton said. "Now it's gone."

"A lifetime of my family memories are all gone. I had photos and furniture and other artifacts from family history is totally gone," he added.

'A community has been changed for a lifetime'

In a statement, Whitman County Sheriff Brett Myers said the scale of the disaster in Malden "can't be expressed in words."

"The fire will be extinguished, but a community has been changed for a lifetime. I just hope we don't find the fire took more than homes and buildings. I pray everyone got out in time," Myers wrote.

Congresswoman Cathy McMorris Rodgers also issued a statement on Tuesday regarding the fires in Whitman County and other areas of eastern Washington.

“The destruction in Malden, Pine City, Colfax, and other towns in Eastern Washington is heartbreaking and unimaginable,” said McMorris Rodgers. “My prayers for safety go out to all of the families impacted. I will be working with and supporting state and local officials and doing everything I can on the federal level to ensure our communities have the resources they need to rebuild. My team and I are continuing to monitor the ongoing fires and will support fire responders in containing these fires however possible.”

Those who have been displaced or have lost a home in the towns of Malden and Pine City are urged to contact the American Red Cross at 509-670-5331.

Editor's note: A previous version of this story said Public Lands Commissioner Hilary Franz reported the first fatality in Malden. This is not the case. Franz said she had confirmed the first death in Washington state.