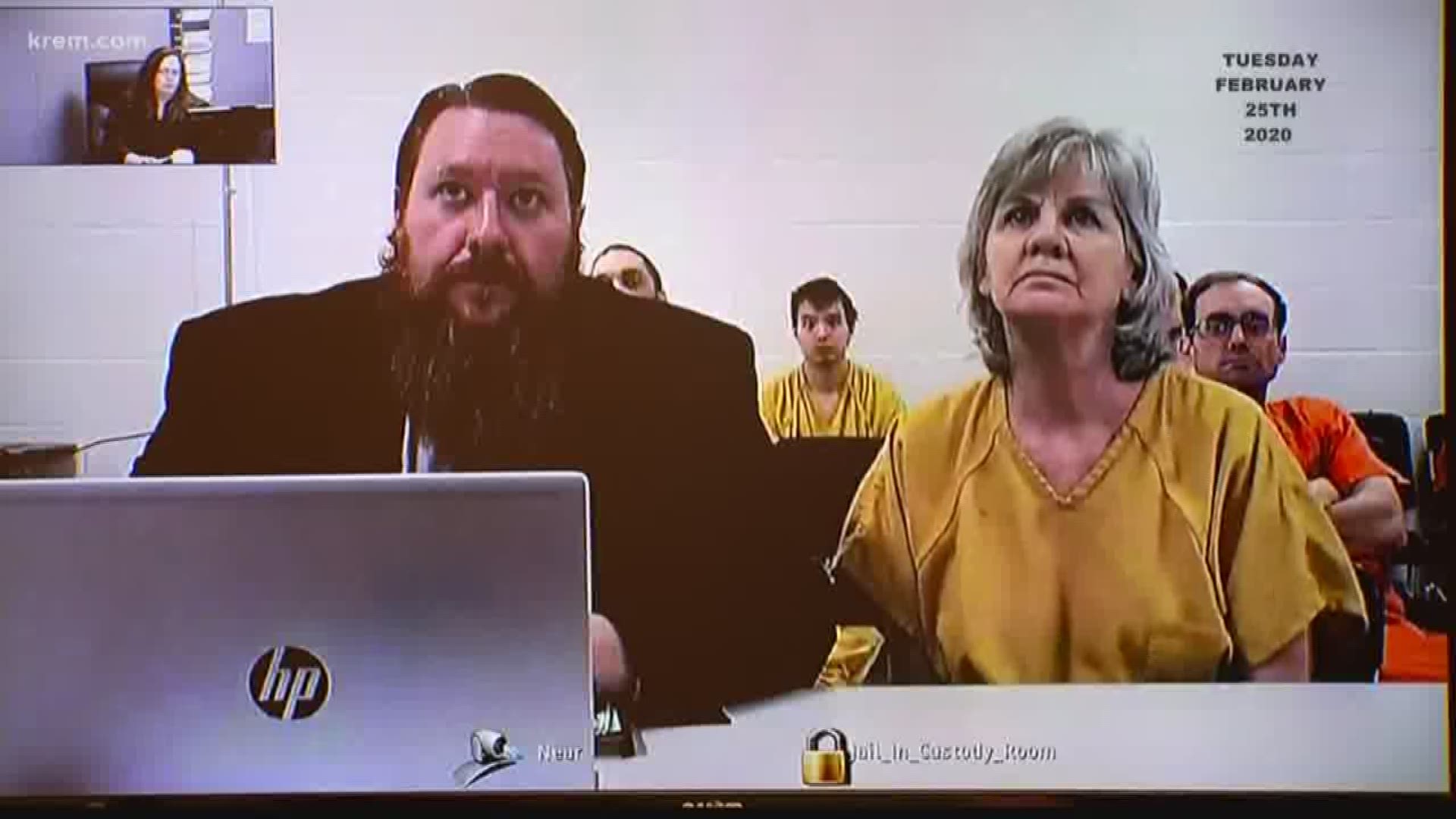 COEUR D'ALENE, Idaho — Due to the continued rise in COVID-19 cases across the state, jury trials in Idaho have been put on hold indefinitely, as reported by KREM 2's news partner the Coeur d'Alene/Post Falls Press.

The Idaho Supreme Court issued the latest order in December, after a previous order that would have allowed jury trials to start again this month. The order applies to all criminal and civil trials and won’t be reconsidered before March 1.

She said her husband fell from the couple’s boat and drowned in Coeur d’Alene Lake on Feb. 13, 2018.

After a two-week search, Larry Isenberg’s body was recovered from the lake. An autopsy reportedly showed that he died due to an overdose of Benadryl.

In 2019, Lori Isenberg pleaded guilty to wire fraud and theft from a federal program. She reportedly embezzled $570,000 from the North Idaho Housing Coalition during her time as director.

Isenberg’s trial, which has been repeatedly postponed due to the COVID-19 pandemic, is scheduled to begin June 2. The jury trial is expected to last two to three weeks.

If convicted on charges of premeditated murder and conspiracy in the death of her husband, she could face life in prison or the death penalty.

If she is found not guilty, she would still serve out the rest of a five-year sentence for embezzlement.

The trial of a teen accused of pointing a gun at police before they shot him 14 times has been postponed multiple times due to the COVID-19 pandemic.

Tyler R. Rambo, 19, is charged with attempted second degree murder and aggravated assault. He pleaded not guilty to all charges.

A two-week trial is currently scheduled to begin March 1.

The charges stem from the July 4, 2019, celebration at City Park in Coeur d'Alene when police said Rambo waved a gun and fired a round. He allegedly pointed a gun toward police before they shot him.

Rambo lost both legs as a result of being shot by police. He has since filed a $9 million lawsuit against the city of Coeur d’Alene, the police department and multiple police officers, which alleges the agencies failed to adequately train, educate, supervise and direct police officers whose actions left him permanently disabled.

Judge Cynthia Meyer denied a motion in November to reduce Rambo’s bond from $300,000 or release him on his own recognizance.

A woman is accused of attempting to kill her former girlfriend by setting fire to her ex’s kitchen.

Jamie L. Morley, 43, of Coeur d’Alene, is charged with first degree attempted murder and first degree arson, both felonies. She is also charged with two counts of unlawful possession of a prescription drug, a misdemeanor. She pleaded not guilty to all charges.

Police responded Sept. 29 to a Coeur d’Alene home where a resident said she woke around 5 a.m. to a fire in her kitchen sink.

The resident told police she believed Morley, her ex-girlfriend, had set the fire. She said the couple was breaking up and had argued the night before.

Both she and Morley were at the scene when police arrived.

Police reportedly found two burned wire storage baskets in the kitchen. The blinds above the sink were also damaged.

Fire investigators determined there was no evidence the fire started on its own, according to court documents. The gas stove was reportedly turned on and letting out gas.

Coeur d’Alene Fire Inspector Bobby Gonder said in court that, in an enclosed space where a fire was burning, the gas would eventually fill the space, ignite and cause an “extreme” explosion.

Morley allegedly told police that she “must have” started the fire, but she said she didn’t remember doing so.

Police arrested Morley at the scene. A search of her person reportedly yielded loose prescription pills, which Morley allegedly said were not prescribed to her.

A five-day jury trial is scheduled to begin March 1.

A woman is accused of killing her newborn baby last April and leaving the body in a plastic bag on the front porch of the Rathdrum home where she slept on a couch in the garage.

Elizabeth B. Keyes, 22, is charged with first-degree murder and concealment of evidence, both felonies. She pleaded not guilty to both charges.

Keyes told police she didn’t know she was pregnant before she gave birth April 14 in a bathroom at the home where she was staying.

Police said evidence showed the child was born alive. Keyes is accused of strangling the child and using a box cutter to slit open the infant’s stomach before placing the body and other debris in a bag.

A household member who reportedly believed Keyes had experienced a miscarriage brought Keyes and the infant to Kootenai Health, according to court documents.

It was there, police said, that medical staff discovered the incision in the child’s body.

A 10-day jury trial is scheduled to begin March 15.

A Montana man is accused of firing into a crowd outside a downtown Coeur d’Alene bar last summer.

Police responded to reports of a shooting at the Iron Horse Bar around 9 p.m. on July 11.

A man later identified as Sherper reportedly had an altercation with security staff, who had told him he was no longer allowed in the building.

Witnesses who were smoking outside the bar told police Sherper yelled at them as he walked past, then threatened to come back and kill them.

Sherper allegedly returned to the scene in a white truck and shot at three Iron Horse employees as he drove past the bar with what was believed to be a .45 caliber handgun. Witnesses said he continued to fire at people under an awning outside the bar.

Police estimate between six and nine shots were fired.

Two people were injured and transported to Kootenai Health, according to court documents.

Sherper reportedly left the scene before law enforcement arrived. Police later located him at a Coeur d’Alene residence. He reportedly surrendered to police after a standoff that lasted several hours.

Ralph Bartholdt and Madison Hardy contributed to this report.