About two months after a COVID-19 outbreak among Durham employees that left one bus attendant dead, a KREM 2 records request is uncovering the truth. 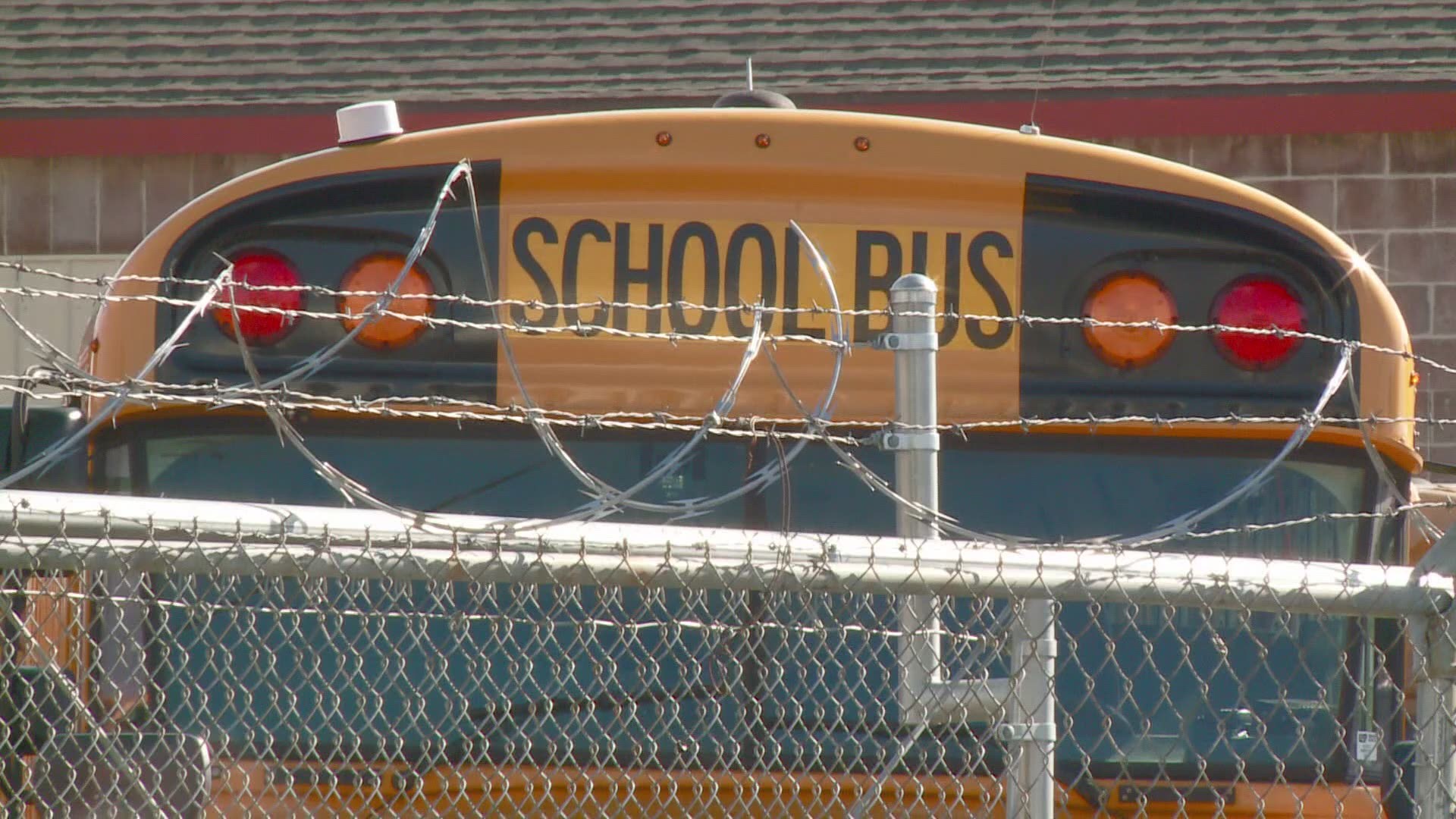 SPOKANE, Wash. — A public records request in March revealed email exchanges between Durham Bus Services and Spokane Public Schools (SPS) about safety violations. To take that further, KREM 2 obtained days' worth of footage taken on school buses. The videos show some of the most telling moments.

KREM 2 launched an investigation following a coronavirus outbreak that began in February among Durham employees in Spokane. The outbreak caused concern among parents, SPS staff and bus drivers.

SPS partners with Durham to provide school bus services for its students.

In emails between SPS and Durham employees, one bus route was repeatedly flagged for concerns. That was Bus 159 to and from Roosevelt Elementary School.

“It’s about to start getting crowded,” the Durham Bus Services driver of Bus 159 said in a video obtained by KREM. “There’s a bunch of new faces.”

"They are telling me I can only have 40 kids on here,” the driver added. “I already have that."

Amaelia Potter’s seven-year-old son Leium takes the bus to and from school every day. Her son was one of the hundreds of students who had to quarantine after the outbreak among Durham staff members.

"Who was making sure that they're staying safe?” Potter asked. “Because they're not, they're obviously not. Two months, not even two months, and he's been exposed twice now on the bus, and I can't get any explanation from the bus as to what sanitary precautions are taking place.”

Email exchanges between Potter and SPS confirm staff told Potter her son was exposed, once again, to COVID-19 on the bus. The first time he was exposed, Potter said she found out over a phone call. He is currently in quarantine from the second exposure.

“It makes me really want to be able to stand up in front of somebody, a judge, a lawyer, scream it from the rooftops that our children are not safe,” she added.

In the 17-hours worth of video that KREM 2 obtained, the Durham bus driver of Bus 159 didn’t follow many of the safety protocols outlined by Spokane Public Schools and the Washington Department of Health. Based on those protocols, Durham is responsible for following them and educating its staff on them.

The videos show violations that go against the protocols. The bus routinely had more than 40 students at once. The driver did not follow seating charts and was also less than six feet away from students, which goes against the guidance from the Department of Health.

Additionally, the driver took his face covering off when he was supposed to keep it on. Windows remained closed and didn’t offer proper ventilation.

In addition, the driver did not properly clean and disinfect the bus between pick-ups and drop-offs. He scanned the aisles, but did not wipe down any seats, rails or windows.

The COVID-19 safety protocols were shared with SPS parents by email on Feb. 24. In that email, SPS outlines buses are not filled to capacity and buses with capacity for 71 students should have no more than 40 students per bus.

Credit: KREM
SPS email to staff and families about the Durham COVID-19 outbreak on Feb. 24, 2021

SPS told KREM 2 the protocol for the number of students on a bus was a self-imposed guideline issued out of an abundance of caution and state regulations were not as strict. Instead, DOH guidelines broadly call for school districts to “keep riders as far apart as possible on the bus” and “consider how to reduce occupancy and increase space on the bus through scheduling and using additional buses.”

The violations caught on camera are all from a one-week timeframe back in February when the outbreak among Durham bus drivers and other employees was at its height. During that period, the Spokane Regional Health District (SRHD) says one bus attendant died, more than 30 employees contracted COVID-19 and more than 60 employees were quarantined in less than one month.

When the outbreak was first reported, Durham Bus Services stood by its safety protocols and Spokane Public Schools supported the transportation company. SPS did not agree to do an on-camera interview for this story, but KREM 2’s Morgan Trau did speak with the district’s spokesperson during the outbreak in February.

But KREM 2's public records request revealed that during that time, the district’s security director emailed Durham saying, "Violations have already occurred that can no longer be overlooked." In the same email, it's stated SPS will start fining the company $200 a month for violation of COVID-19 safety protocols, mask violations, delayed routes, late buses and a lack of drivers.

Spokane Public Schools later acknowledged reports that safety protocols had not been followed. Emails show the district was struggling to get seating charts from Durham for contact tracing during the outbreak.

Durham also did not agree to do an on-camera interview for this story but Trau did speak with the company in March about what changes had been made since the outbreak.

“The reinforcement of our mask policy and making sure that we're aligned with the expectations of the school district as well,” Durham Vice President of Safety Kevin Kilner said. “And then also pushing, moving forward with the Department of Health's recommendations for lowering windows on the school buses as well. We also spent time reminding our employees of our expectations regarding mask wearing, social distancing and vehicle disinfecting."

Potter was frustrated the school district did not do more to hold Durham accountable.

“I guess the school just hasn't had it driven into them yet that this is still technically their responsibility,” Potter said. “How are they able to get away with just — plain negligence at this point, and nobody's doing anything about it.”

KREM 2 reached out to SPS to go over concerning moments in the videos with them. The district provided a statement on May 3 that reads:

“As we shared last week with the SPS School Board as well as all staff and families – Spokane Public Schools contracts with Durham Bus Services to provide transportation for students through a team of 121 drivers, who conduct more than 130,000 routes to and from school each year. We appreciate the hard work of Durham drivers and support staff.

While most SPS routes are without incident, there have been cases of noncompliance with COVID safety protocols and student management issues this year. In response to these reports, SPS has followed up with Durham to determine whether concerns are substantiated. We are very disappointed that there have been some isolated incidents and have communicated with Durham to ensure they are addressed.

No situations involved student transmission of COVID-19 on school buses.

The Durham national office has placed new management team at their Spokane location who have reinforced training and compliance protocols. SPS will continue to monitor transportations services and communicate with Durham to help ensure the ongoing safe travel of our students.

We encourage families who have ongoing concerns with their student’s busing experience to contact us.”

The Department of Labor and Industries is conducting two investigations into the Durham outbreak. The first is related to the death of the bus attendant, 62-year-old Dave Simpson, who potentially contracted COVID-19 at work during the outbreak in February.

Simpson was diagnosed with the virus on Feb. 22 and passed away on Feb. 27. Simpson started working for Durham Bus Services in 2019 as an attendant for Spokane Public School students with disabilities. A-year-and-a-half later, two of his sisters, Twyla Sample and Starla Barnhill, said they believe he contracted COVID-19 during the Durham employee outbreak in late February.

The second L&I investigation is into Durham’s safety procedures.

Durham Bus Services provided a short statement for this story that said:

“Thanks for reaching out. While we appreciate the opportunity to interview, we will not be able to accommodate your request at this time. We have worked tirelessly over the last month to make things right. This included updated management and operational changes.”

After follow-up questions, Durham did not elaborate on what those management or operational changes are.

Editor’s Note: An earlier version of this story incorrectly cited safety regulations being issued by Washington OSPI. This story has been updated to reflect the protocols established by Spokane Public Schools and the Washington State Department of Health.