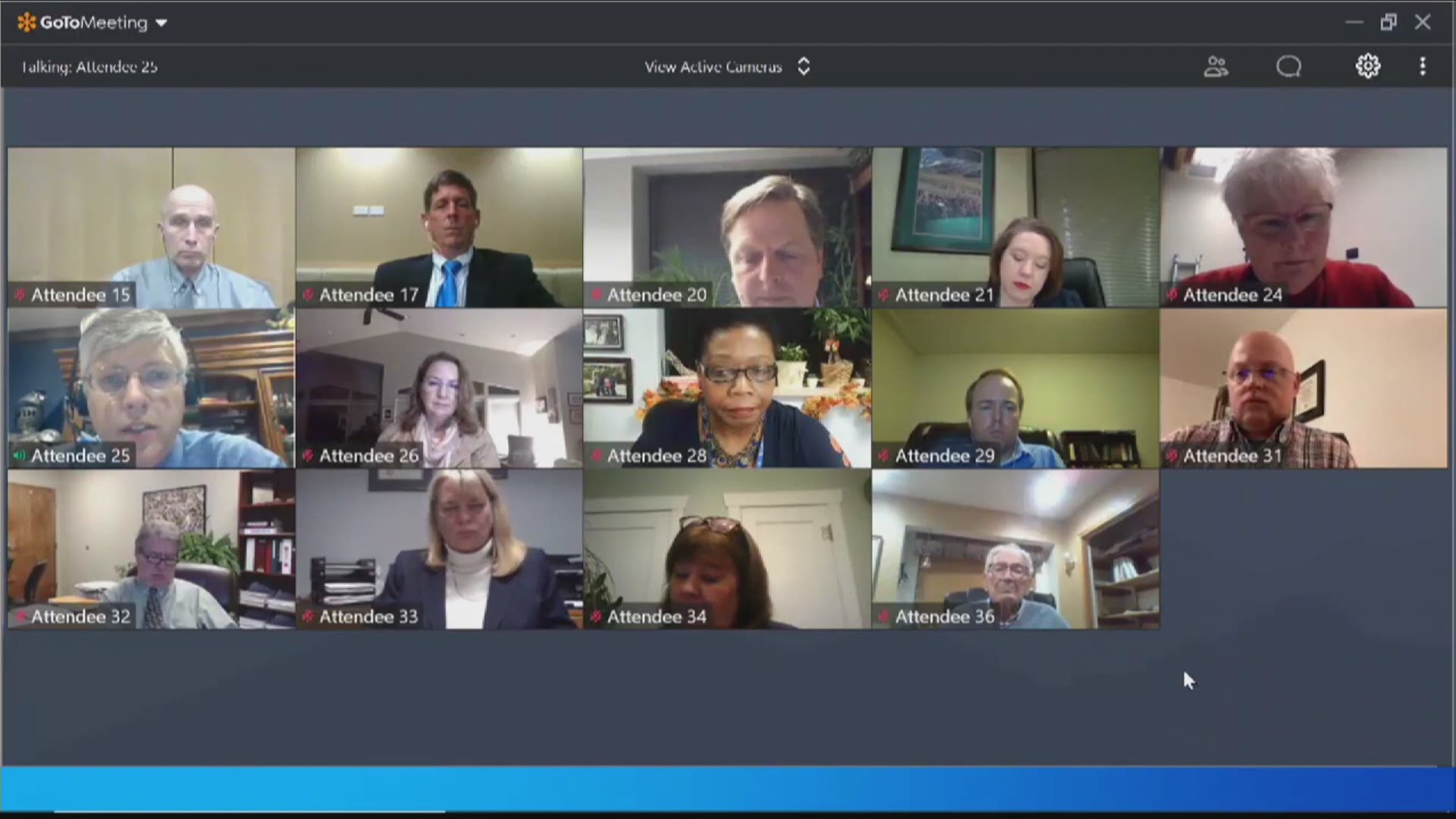 SPOKANE, Wash — The Spokane County Board of Health voted 8-4 to fire Dr. Bob Lutz during a special meeting that lasted nearly four-and-a-half hours on Thursday.

Lutz led Spokane County's response to the COVID-19 pandemic as Spokane Regional Health Officer. He said in a statement on Monday that he was officially fired from his position last week.

The special meeting of the health board began at 3 p.m. on Thursday, Nov. 5. It included remarks from SRHD Administrative Officer Amelia Clark and Lutz, questioning from board members and a lengthy executive session that was closed to the public.

For the latest updates to this story, click here to read our live blog

KREM received an email on Wednesday as part of a records request in which Spokane City Council President Breean Beggs said that the board left an executive session last Thursday under the thought that Lutz would be disciplined but not fired. The records request also contained hundreds of pages of emails showing support for Lutz.

RELATED: Emails show Spokane Co. Board of Health expected Lutz to be disciplined, not fired

On Wednesday, Nov. 4, the Spokane Regional Health District canceled its next two weekly coronavirus briefings. The next scheduled briefing is on Nov. 18 at 10 a.m.

In a statement released on Monday, Lutz outlined what he called "inaccurate and misleading information" provided by SRHD regarding his employment status.

Lutz's full statement released through his lawyer is as follows:

I understand from media reports that a SRHD Board meeting will be scheduled to address the status of my employment, although I have not been personally advised of such. I intended to await that meeting before commenting further, as I wanted to address the issues directly with the Board. However, recent statements from the SRHD contained inaccurate and misleading information concerning my separation from employment that need to be clarified. To be clear, Amelia Clark fired me last Thursday. She told me in a meeting late Thursday afternoon that I was terminated “effective immediately,” requested my SRHD identification, keys, cell phone and laptop, and told me I could contact HR to retrieve my personal items. She also provided me with a written severance offer, stating that I had until the next day (Friday) at 4:00 p.m. to resign and sign the agreement. The offer of severance required me to waive my claims against the SRHD in exchange for 3-months pay, and a confidentiality agreement preventing me from disclosing the settlement terms. I refused to accept SRHD’s severance offer, as I do not think Ms. Clark’s actions were justified or lawful. As things stand, I was told I was fired and have been denied access to my office, phone, files, records and my computer since last Thursday. I do not know who is currently acting as the SRHD’s public health officer.

Clark said she brought forth concerns about Lutz during an executive session of the board on that same day. SRHD did not elaborate on the issues.

Lutz's knowledge and guidance is "sound" and the health district will continue to stand by it going forward, Clark said at a press conference on Friday, Oct. 30.

Watch the full press conference below

The executive team at SRHD was notified on Thursday evening that Lutz was no longer an employee, while staff were notified before 8 a.m. on Friday, according to Clark.

Health district leaders said they are in the process of recruiting another health officer, with help from Washington state, but they did not clarify a timeline for filling the vacant position. Clark said she will begin the recruitment process "as soon as possible."

“The decision to ask for the resignation of any employee is never easy and, in the case of a health officer, it’s never going to be easy," she said during the press conference.

If Dr. Lutz is terminated, the health board will vote on Dr. Mary Begum as interim Health Officer.

Lutz released his first statement on Saturday evening, saying he had not resigned as health officer. He also said he hired a lawyer and plans to pursue all "available legal remedies" if the board votes to terminate his position.

"In light of the recent events surrounding my employment with the Spokane Regional Health District, I have hired attorney Bryce Wilcox from Lee & Hayes. To be clear, I have not resigned. I maintain a strong desire to continue working to promote the health and safety of the citizens of Spokane County and this region. The manner, timing, and motivation underlying the request I resign is troubling, and I have hired Mr. Wilcox to assist me in pursuing all available legal remedies should the SRHD’s Board decide to terminate my employment.  Like everyone else, I am now in limbo and am awaiting word from the Board regarding my employment status. Further information will be forthcoming after I hear from the Board."

Board member and Spokane City Councilmember Betsy Wilkerson told KREM's Amanda Roley that she doesn't support the decision and wasn't in the executive session on Thursday due to travel.

Wilkerson also said she is disturbed by what happened, and the board must vote on the appointment and termination of health officers.

In a statement released on Saturday, board member and Mayor of Millwood Kevin Freeman said he stood by Dr. Lutz and his actions during the pandemic, but then went on to say if Clark proves that Lutz is "detrimental to the Spokane Regional Health District" he will vote for Lutz's termination.

Freeman said he doesn't expect the health district to "change directions" on the pandemic if Lutz is removed.

“I am grateful that the Spokane Regional Health District issued a statement on Saturday correcting the inaccurate information from its Friday media release and press conference. Despite several requests, the District has still not clarified who is currently acting as Spokane’s Local Health Officer," Beggs wrote in part.

Spokane Valley Mayor Ben Wick, who serves on the board, said it "fully supports" the actions taken by Clark.

“I can assure you the decision was difficult and not made lightly," he said.

Spokane County District 3 Commissioner Al French, who serves on the county Board of Health, spoke with KREM's Mark Hanrahan on Friday morning after the news broke, saying that the pandemic represents "unique times" for the county.

"You know, there's a lot of opinions around the timing of this, and there's a lot of angst in the community about why [the county] hasn't moved further, why have we not moved faster. There are a lot of families that are struggling. You know, until, at the national level, we get some kind of stimulus package and stuff ... there's a lot of folks that are really hurting," French said. "We just, as the Board of County Commissioners, we just have the food bank, another $2.5 million to address found sustainability. We're doing things for rent assistance. This is unique times, so we're doing what we can to help those in our community, especially those that are struggling the most."

Watch the full interview with Al French below or by clicking here:

About 100 people gathered to support Dr. Lutz outside the Spokane Regional Health District on Sunday afternoon.

The protest was organized by a former SRHD employee, Chandra Richardson.

A petition calling for the removal of Spokane Regional Health District Administrative Officer Amelia Clark has gained thousands of signatures on Change.org. The petition was posted on Saturday night.

The petition accuses Clark of "recklessly abusing her power in calling for the resignation of the County's Public Health Officer amidst the current pandemic."