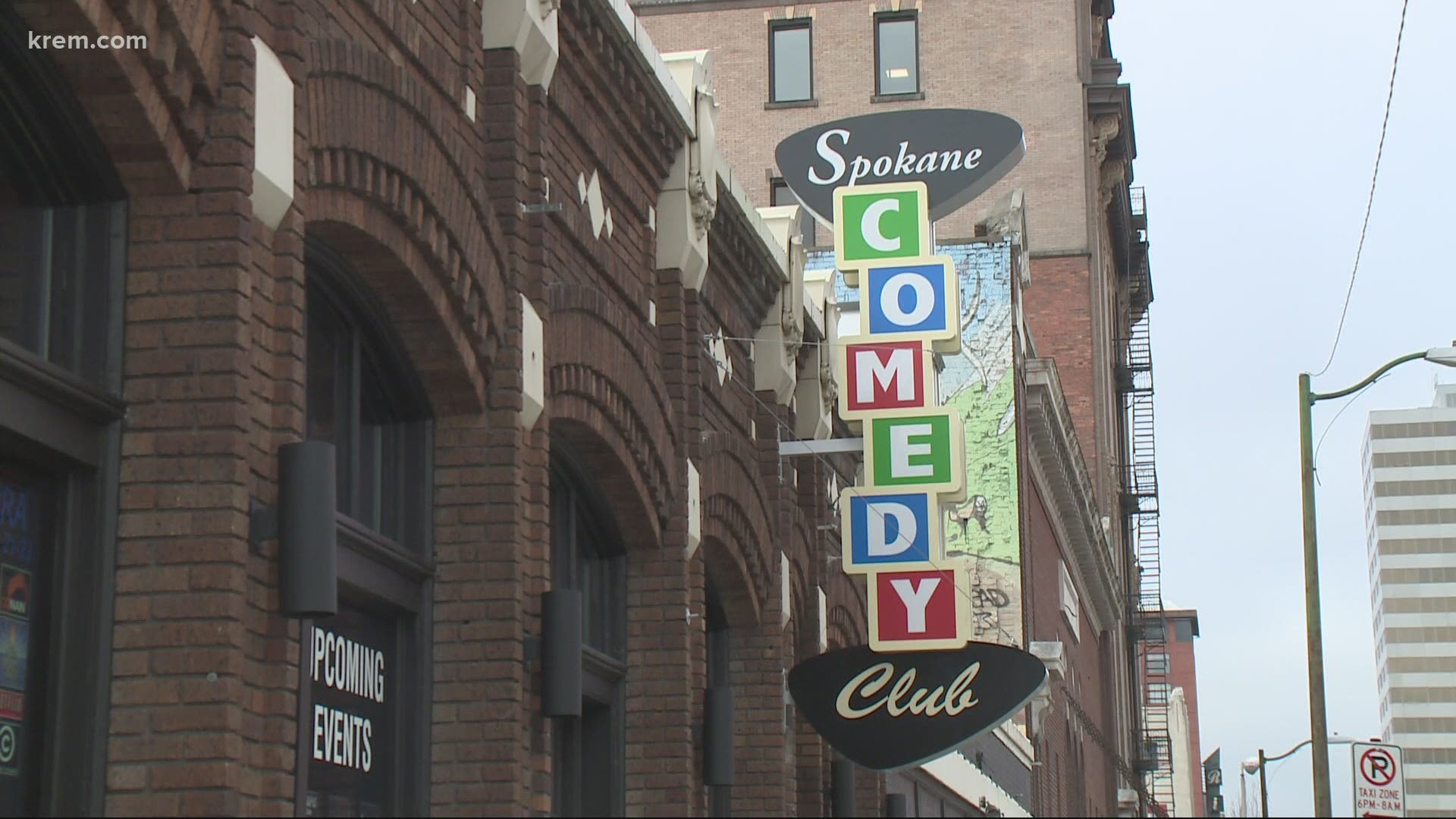 SPOKANE, Wash. — As the Spokane Comedy Club is rounding out nearly 10 months with its live showroom closed, the team behind the scenes continues to pivot their approach to keeping their heads above water.

In the tail-end of the summer, the club had shifted into online comedy shows and boozy milkshakes. But as temperatures dropped across the Inland Northwest, the craving for milkshakes started to dwindle.

"Apparently people in 11 degree weather don't want milkshakes," said club owner Adam Norwest with a laugh. "Who would have thought?"

But even as he laughs his way through his late-summer attempt to garner new business, he also admits the attendance of their online comedy shows dwindled as the year drew to a close.

That meant another shift in mentality for Adam, who was solely focused on keeping his staff paid and his doors from closing permanently.

"If we can make it, we will sell it," Norwest said. "I'm at the point that I'll mow your lawn, I'll babysit your kids, whatever we have to do to get to the other side of this so comedy can come back."

That's why Norwest attempted to do something he's never done before: run a restaurant —  and not just one restaurant, but three:

Norwest said he's never owned a restaurant before, but that it also offers him a good distraction from time to time.

"I have good days and bad," he said. "I have days that I'm staying busy enough, trying to run all of these restaurants and stuff that it's okay, and I'm like we're going to get through this. And then I have days where I look at our bank account, and I'm just like 'Oh no.'"

But it's all worth the effort, Norwest said, because there could be new opportunities to have even bigger, better comedy shows than before when they can return.

"We're going to get to be open before larger theaters, and so hopefully there's some acts that we normally couldn't get that are going to have to play smaller venues," explains Adam. "That could be kind of exciting and kind of a fun way to bounce back too."

Imagining what that day will feel like fills Norwest and his staff with emotion.

"I get butterflies in my stomach just [thinking about reopening the club]," he said. "We worked so hard to get it open, and we're working so hard to survive this, that for that all to come back together is going to be incredible."

Restrictions on live entertainment in Washington state will be lifted on Jan. 11, Gov. Inslee said while announcing the state's new "Healthy Washington" reopening plan. But there are tight capacity restrictions.

In Phase 1, indoor entertainment establishments can only provide private rentals or tours for households of no more than six people and general admission is prohibited. They can operate at a maximum of 25% capacity in Phase 2.

Spokane Comedy Club staff and supporters are now looking to the "Save Our Stages Act," a piece of the recently passed federal COVID-19 relief package that offers grants to businesses featuring independent music, comedy, theater, museums and other forms of entertainment.

A grant from that act could go a long way in keeping the club from falling farther into debt, Norwest said. But until then, he said the best way to help is by purchasing gift cards from the Spokane Comedy Club website.