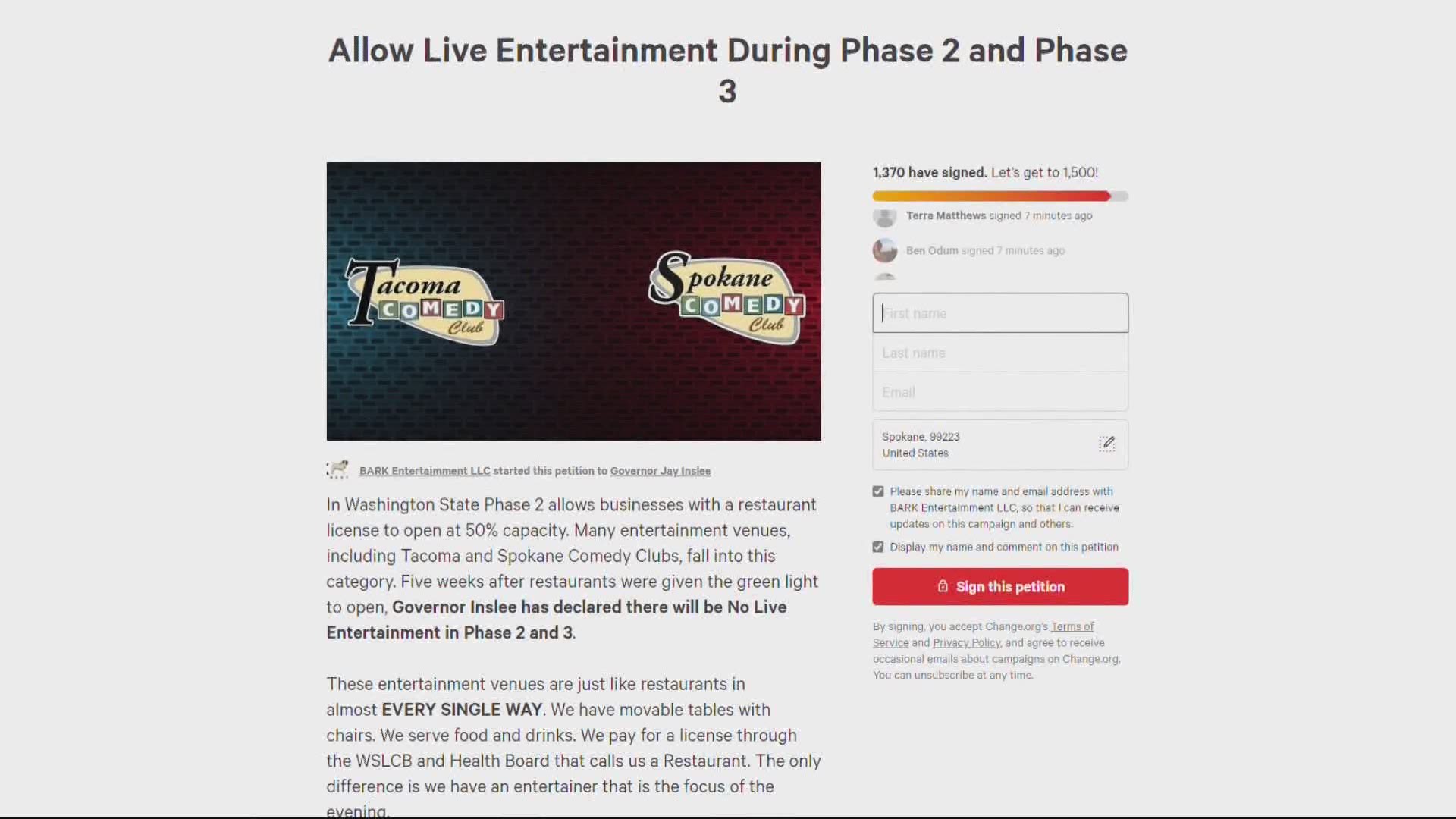 Spokane Comedy Club posted on Facebook that it has been unable to open during Phase 2 because it has a nightclub license. Nightclubs and entertainment venues will remain closed until Phase 4 of the state's reopening plan, while restaurants and taverns are currently allowed to operate at 50% capacity.

The comedy club says it was told to pay $2,000 and apply for a restaurant license in order to open in Phase 2. Their request was approved on July 9, but Inslee later released new guidelines that prohibit all live entertainment at restaurants and taverns.

Nightclubs were ordered to remain closed through Stage 3 of reopening in Idaho, apart from those that could open as a bar if business protocols were met. They are now allowed to operate with diminished standing-room occupancy for all areas in Stage 4, which includes Kootenai County and others in North Idaho.

RELATED: 'It's been an explosion of cases': Bar-hopping in North Idaho could be contributing to COVID-19 spike

Bark Entertainment LLC, which operates the Tacoma and Spokane Comedy Clubs, said in its petition that "entertainment venues are just like restaurants in almost every single way."

"We have movable tables with chairs. We serve food and drinks. We pay for a license through the WSLCB and Health Board that calls us a Restaurant. The only difference is we have an entertainer that is the focus of the evening," the company wrote.

The company says it is able to maintain strict social distancing guidelines, and that staff and customers are wearing masks. Temperature checks are also performed, along with thorough sanitizing.

"We are being told the reason why live entertainment is not allowed is the state is trying to discourage gatherings. However, when we have a restaurant license and fall into every other restaurant category, we should be allowed to simply have a performer as long as we are following all of the other guidelines," the petition reads.

The closure affects not only the comedy club employees and families, but local artists and entertainers who aren't getting paid to perform, the company wrote.

"We understand COVID-19 is a deadly disease. We want to do our part to help slow the spread," the petition reads. "We can do that by following all of the guidelines you have put in place for restaurants. Allow us to do that. Allow us to feed our families."

Spokane Comedy Club says it is contacting people who have tickets for an event in the ext month regarding refunds or new show dates.

Health officials have said that bars and restaurants do pose risks of coronavirus infection. On Monday, Spokane County Health Officer Dr. Bob Lutz said they are a "high-risk environment" as they are indoors and do not require guests to wear a face covering throughout their visit.

“Inside is more risky because of airflow, because of concentration of people," Lutz said. “Your risk of infection is a function of time and space.”

RELATED: Spokane mayor wants outdoor summer events to return, though many have been canceled