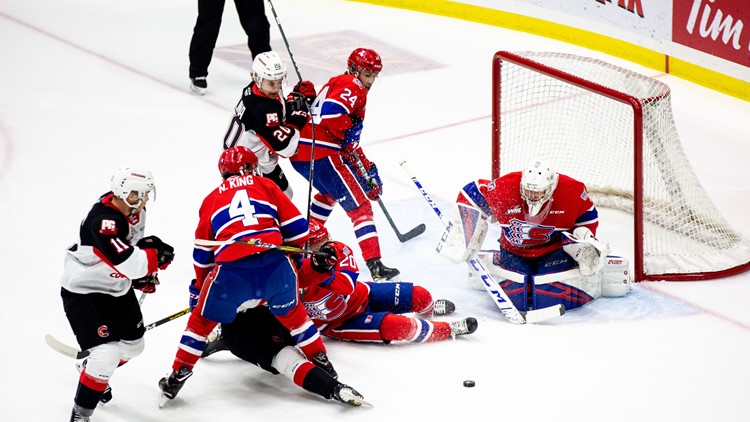 PRINCE GEORGE, BC — Wrapping up the first month of the regular season, the Chiefs have been up and down like a seasick passenger on the high seas thus far. Moments where you start to feel good on the deck of the ship, followed by moments where you're ready to lose your cookies but somehow hold on. Spokane is 4-3-1 ... a .500 record...not bad, but not great either. One of the more disappointing losses of the season just took place last weekend at home against a Prince George team that had won just once all season and had not beaten Spokane since March of 2017. That was until the Cougars took out the Chiefs 3-1 at home last Friday in a lackluster offensive performance from Spokane.

The Chiefs now had a chance to make up for that performance as they headed North to Prince George to face the Cougars in back to back games. Spokane had ended their recent home stand with one of their top performances of the season with a convincing 6-1 victory over Victoria the night after the PG loss. After a long bus ride Wednesday, the Chiefs had a crisp practice Thursday as they prepared to face Prince George in game one Friday night. Much like the game in Spokane the previous week, the Cougars were the aggressors in the first period as they pushed the Chiefs around and won the puck battles net front. PG out shot Spokane 14-8 in the first and scored the only two goals to take a 2-0 lead after one.

RELATED: A look back at the Chiefs 2 game home stand with Prince George and Victoria

The Chiefs would turn things around in the second as they out chanced the Cougars 17-4 in the middle frame and drew within one on Eric Atchison's first goal of the season midway through to cut the lead to 2-1 after two. It looked like things were going the Chiefs way. Spokane would then out shoot PG 13-6 in the third and get the only two power play chances in the period...and yet would fail to score on Cougar goalie Taylor Gauthier as he and Prince George picked up their second straight win over Spokane..this time by a score of 2-1. For the second straight game, the Chiefs had out shot the Cougars by a wide margin, this time 38-24 after a 45-24 advantage in the 3-1 loss. The problem though was the same as it was the previous Friday; many of the shots coming from the perimeter with little net front traffic in front of Gauthier.

The challenge would now be whether the Chiefs were willing or able to change that tendency the next night as they faced the Cougars for the third time in 9 days. Spokane came out Saturday looking determined to get their first win against Prince George as they fired 20 shots on Gauthier. The PG netminder was up to the task though, turning aside every shot. To make matters worse, the Cougars scored with 6 minutes left in the period on one of just 6 shots they put up to take a 1-0 lead after one. In the second, Spokane finally found an answer to Gauthier as Adam Beckman scored his 4th of the year just over 7 minutes into the period to tie the game at one. The Chiefs then took their first lead of the weekend when Bear Hughes notched his 3rd of the season midway through to give Spokane a 2-1 lead after two.

Prince George scrapped back in the third though as they scored on a net front scramble at 12:55 to even the game back up at two. Spokane had failed on two power play chances in the first, but would break through on their third late in the third period. Bobby Russell's shot from the point was tipped by Michael King just past Gauthier and over the goal line with just over 3 minutes left in the game to give the Chiefs a 3-2 advantage. Eric Atchison notched a huge insurance goal at 17:55 to make it 4-2, and Ty Smith sealed the win with an empty netter in the final minute to give Spokane their first win over Prince George 5-2. The Chiefs out shot the Cougars 38-19 on the night as Spokane put up 76 shots over the weekend on Prince George. It was a big win for the Chiefs as they now have a chance to split the season series with the Cougars when they face off again in two weeks at the Spokane Arena.

Spokane now returns home to open their biggest home stand of the season as they host 7 straight games over the next 3 weeks. The Chiefs will start things with 3 games in 4 nights this week as they entertain Brandon Wednesday, Portland Friday and defending league champion Prince Albert on Saturday. I'll have the call on 103.5 FM the Game and 1510 AM KGA starting with the pre-game shows at 6:30 pm and the puck drops at 7:05 pm. Let's hope the Chiefs find their mojo at home and we hope to see you at the rink!

The following video is a report on Chiefs forward Adam Beckman being drafted.