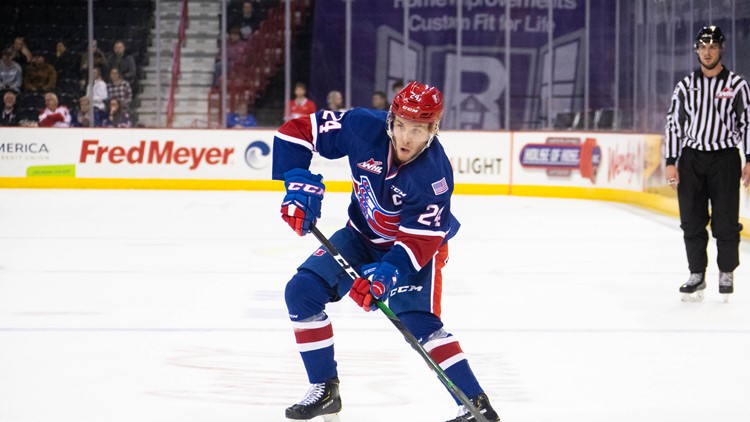 SPOKANE, Wash — The Chiefs didn't exactly open their home season with a lot of fanfare as the club was blanked by their biggest rival Tri City 3-0 last Saturday. The good news though, was the team got a week to work out the kinks in their offensive game. The power play was less than stellar in the first three games of the year, going a league low 1 for 12. Spokane got a big boost for their special teams during the week, when captain Ty Smith returned to the club after returning from New Jersey of the NHL. Smith led the club in assists last season on his way to becoming the CHL defenseman of the year and is the backbone of the Chiefs special teams. As Spokane started a 3 games in 3 nights stretch this past weekend, it literally took just a couple of minutes in the team's opening game of the weekend to show how important Smith is to his club.

Spokane began things Friday night hosting division rival Seattle as they took on the Thunderbirds for the first time this season. The good news for the Chiefs was Seattle was struggling on the power play just as much as Spokane, going 1-12 as well coming in. The T-Birds were coming off an 8-1 thumping at Kamloops, so they were anxious to turn things around early. Smith saw to it the Chiefs would snuff out any hopes for Seattle to seize early momentum. Just 2:14 into the game, Smith got the puck at the blue line and snapped a shot into the net to give the Chiefs a quick 1-0 lead. Spokane got their first power play chance just over 5 minutes later, and took all of 11 seconds to convert as Eli Zummack found an open Jake McGrew net front for his 4th of the season at 7:37 to make it a 2-0 game. The Chiefs wasted little time building on that lead as 16 seconds after McGrew's goal, Luke Toporowski fired home his 2nd of the year to put Spokane ahead 3-0. Seattle would counter with a goal midway through the first, but the Chiefs would take a 3-1 lead after one.

Spokane would put the game on ice in the second. Smith would score his second of the night just 3:45 into the period to put the Chiefs ahead 4-1. Smith then capped a 3 point night with an assist on McGrew's second power play of the contest midway through the second as Spokane went up 5-1. Goalie Campbell Arnold and the defense did the rest as Arnold turned away 11 shots in the third, and 30 in the game, on his way to his first WHL victory in net as the Chiefs started the weekend with a 5-1 win. The special teams were excellent, going 2-4 on the power play and a perfect 5-5 on the penalty kill. Spokane not only got 2 goal nights from Smith and McGrew, but Eli Zummack and Adam Beckman each scored 2 assists. Rookie Reed Jacobsen picked up his first WHL point and Bear Hughes scored an assist in his first game of the year after being injured in the pre-season.

The Chiefs looked to build on their win as they headed to Tri City for the Americans home opener Saturday. Spokane was hoping the Ams opener would play out for the Chiefs much like it had played out for Tri in Spokane's home opener. The Chiefs wasted little time getting on the board as they converted their first power play of the game just 8 minutes in as Ty Smith scored his 3rd goal in 2 nights to give Spokane a 1-0 lead. Eli Zummack made it 2-0 just 1:33 later as he converted Spokane's second straight power play attempt. Jack Finley then used a great individual effort to score his first of the year 13 minutes in to make it 3-0 Spokane. Connor Gabruch then capped a 4 goal first as he finished off a 3 on 1 rush with just 17 seconds left to give Spokane a commanding 4-0 lead after one. The Chiefs out shot Tri City 14-4 in the period as they took the crowd out of the game early. The two teams played a scoreless second period as the Chiefs limited Tri City to 7 shots in the middle frame.

In the third, Spokane put away any hopes of a Tri City comeback as Adam Beckman scored his first of the season on a rebound of a Jake McGrew shot at 4:04 to make it 5-0. Finley then scored his second of the night on a tip of a Bobby Russell shot on the power play to put the Chiefs up 6-0. Bear Hughes capped a 2 point night with his first goal of the year in his second game back midway through the third to cap Spokane's scoring at 7-0. Tri City spoiled the shutout bid of goalie Lukas Parik with a goal with just over 5 minutes left, but it did little to spoil the Chiefs impressive 7-1 victory. The win moved the Chiefs into first in the U.S. Division by a point over Tri City and Portland and Spokane hoped to keep things rolling as they headed home to host Everett the next night at the Arena..

Everett was coming off a 3-2 win in Kamloops the night before and the Silvertips were anxious to get some revenge on a Chiefs team that knocked them out of the West semi-finals last season. Spokane went back to Campbell Arnold in net as they hoped for their 3rd win in 3 nights. The Tips jumped out to a 1-0 lead when Bryce Kindopp scored just over 5 minutes into the game, but the Chiefs countered right back with a power play goal from Bear Hughes just over 3 minutes later to tie the game at one at the end of the first. Spokane lost leading goal scorer Jake McGrew for the game when he exited with a concussion at the end of the period, but the Chiefs would temporarily overcome his departure as Adam Beckman scored a power play goal 3:13 into the second to give the Chiefs a 2-1 lead. Everett would pull even once again late in the period, only to see Spokane come right back and take a 3-2 lead when rookie Brandon Reller scored his first WHL goal at 16:05 to give the Chiefs the edge heading to the third.

The Chiefs were 20 minutes from completing a 3 game sweep through the division, but in the third, the Silvertips scored two goals in the first 3:53 of the period to take a 4-3 advantage. Spokane would out shoot Everett 13-8 in the third, and would pull Arnold from net in the final two minutes. The Chiefs kept constant pressure on Everett in the final minutes, but couldn't find the net, as Spokane ended the weekend with a disappointing 4-3 loss. Instead of moving 3 points ahead of Portland and Tri City and 5 up on Everett and Seattle in the U.S. Division, Spokane now had just a 1 point lead over Everett, Tri and Portland heading into week 4 of the season. The Chiefs now get ready for the final two games of their three game homestand as they host Prince George and Victoria at the Spokane Arena Friday and Saturday nights at 7:05 pm. I'll have the call on 103.5 FM the Game and 1510 AM KGA starting with the pre-game shows at 6:30 pm. Hopefully Spokane ends the home stand strong before heading out on the road next week. The Chiefs are off to just a 1-2 start at home, and let's hope that turns around this weekend. We hope to see you at the rink!