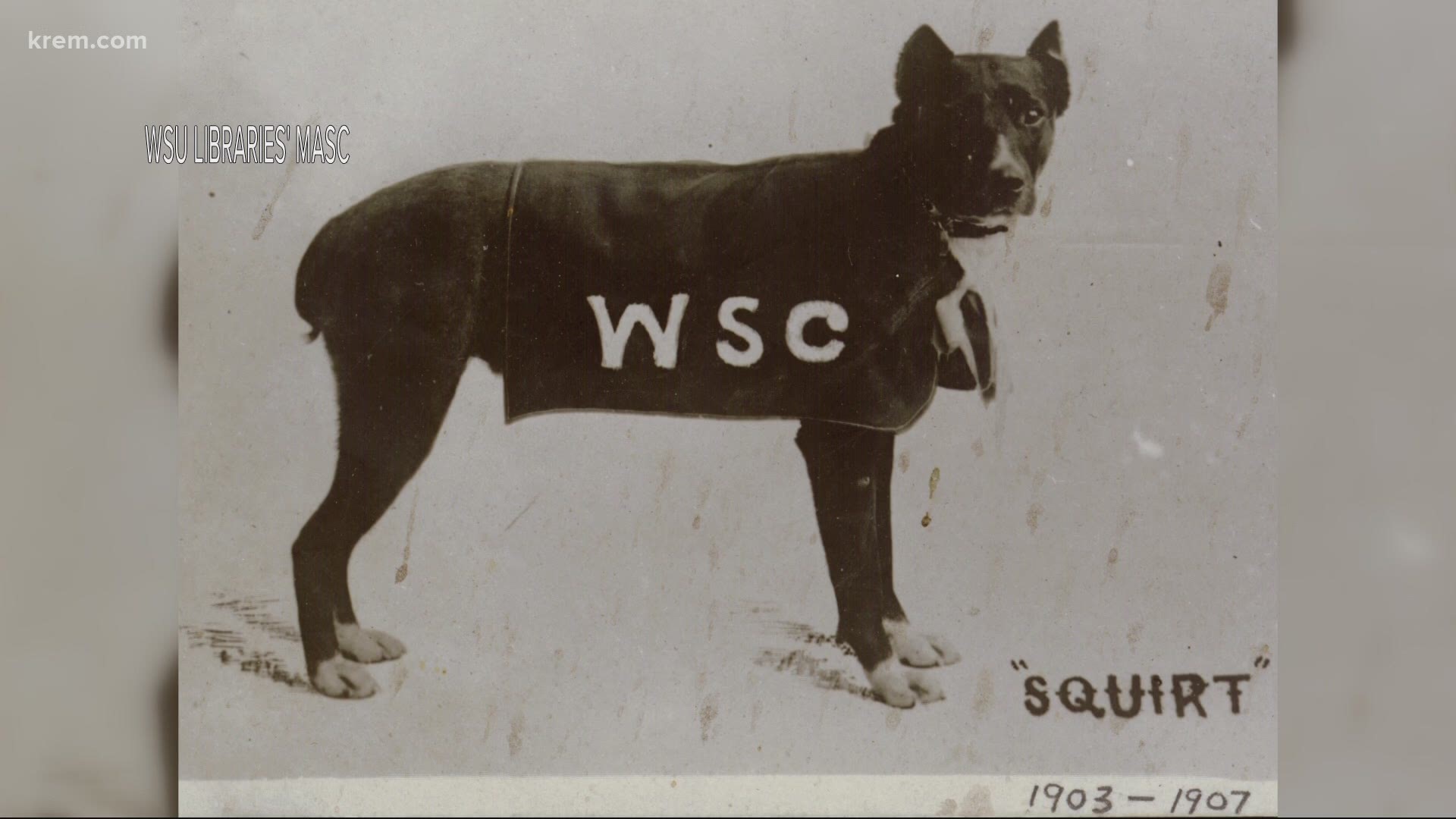 PULLMAN, Wash — The Inland Northwest is a unique place for college athletics.

In our fourth installment of our Mascot Mania series, we’re delving into the history of the Washington State Cougars. We all know Butch, but how did he come to be? Well, there have definitely been some twists and turns on the journey.

SQUIRT, TOODLES, AND OTHER FORGOTTEN MASCOTS

Before WSU adopted the Cougars, they were called a variety of names, all centering around the school’s roots in agriculture. These names included the Farmers, the Aggies, the Hayseeds, and the Potato Diggers.

Squirt was the first animal to roam WSU’s sideline in 1903.

People believe he was the mascot until 1907. His owner graduated, and so did Squirt. Squirt was embroiled in perhaps one of the most unique mascot stories I have ever heard of though.

The bear’s name was Toodles. WSU got Squirt back, but they decided to keep Toodles, and he came all the way back to Pullman.

There were a few more dogs that proceeded Squirt, including Billie and Bull, but dogs eventually faded from WSU’s sidelines.

During the time of Billie and Bull, WSU also adopted another nickname. From 1912 to 1918, the school had three consecutive football coaches from the Carlisle Indian School in Pennsylvania. All three said they were of Native American descent, so WSU's teams started being called the Indians, Chiefs, and Braves.

However this was abandoned once the final coach, Lone Star Dietz, left.

On October 25th of 1919, WSU's football team went to play Cal. Reports came back that said a cartoonist either depicted WSU as the Cougars or a columnist said WSU fought like cougars. The students just went with it. On October 28, they decided that Cougars would officially be their mascot. By November 1, the school had secured two stuffed Cougars and showed them off at a football game against Idaho.

Just a few weeks later, the University of Washington’s football team came to town and stole one of the stuffed cougars. They kept it for 13 years and would parade it out at halftime of games against WSU. In 1932, a group of male Cougar cheerleaders decided they had had enough. They tried to steal the Cougar at halftime, which ignited a brawl that delayed the game by a half an hour and became famous around the country. Unfortunately, the stuffed cougar did not survive the madness and was broken into several pieces.

1927 was the first time WSU had a live mascot. A cougar was gifted to the university by Governor Roland Hartley.

The students wanted to name the Cougar after Hartley, but he declined for fear of losing voters on the west side of the state. Instead, the Cougar was named after WSU’s quarterback at the time: Spokane native Herbert “Butch” Meeker.

Does he look little? That’s because he is. He was around 5'3'. However, he was pretty good and played four years in the NFL.

Butch I passed in 1938. From there, it became a tradition for Washington’s governor to gift a live cougar to WSU once their live cougar passed.

Then a pair of cougar kittens arrived.

However, Butch III passed quickly after arriving to WSU, so its sibling, Butch IV, was the lone Butch. He lived until 1954.

Butch IV was perhaps the most well-traveled Butch. However, that was not his choice. Three times Idaho students stole him. Once he was found on the front porch of an Idaho sorority, another time in a farm on the outskirts of Moscow, and another time in the backseat of a parked car.

A new cage was built so Butch V didn’t have to deal with those shenanigans.

Fun fact: When Butch V died in 1964, they discovered that he was actually a she. The school had her gender wrong her entire life.

The stealing shenanigans were back again with Butch VI, this time at the hands of Gonzaga students.

In December of 1965 they stole Butch and brought him to Spokane. WSU was playing Gonzaga that week in basketball, so the group trotted Butch out for the game and then promptly returned him to Pullman. Butch VI was the longest serving Butch. When he died in 1978, he was 14 years old.

The spring before Butch VI passed, the debate on whether to have any more live mascots heated up. Only 52% of 3,865 students polled said they wanted another live mascot. At first, the school’s president said he would follow the very slight majority and get a new live cougar. However, another poll was conducted during the fall of 1978, and 63% of students said they did not want another live mascot. The school president made an immediate decision to discontinue the WSU tradition.

In Butch VI’s later years, the story goes that the rally squad decided to commission their own mascot costume since the live Butch was declining. Apparently, costumed Butch was a clothing optional character.

Finally, in 2013 Butch got another face lift and a shorter tail.