'It took my breath away': University of Idaho unveils new basketball arena

The arena fits 4,000 fans and the first game there will be October 29 against Evergreen State College. 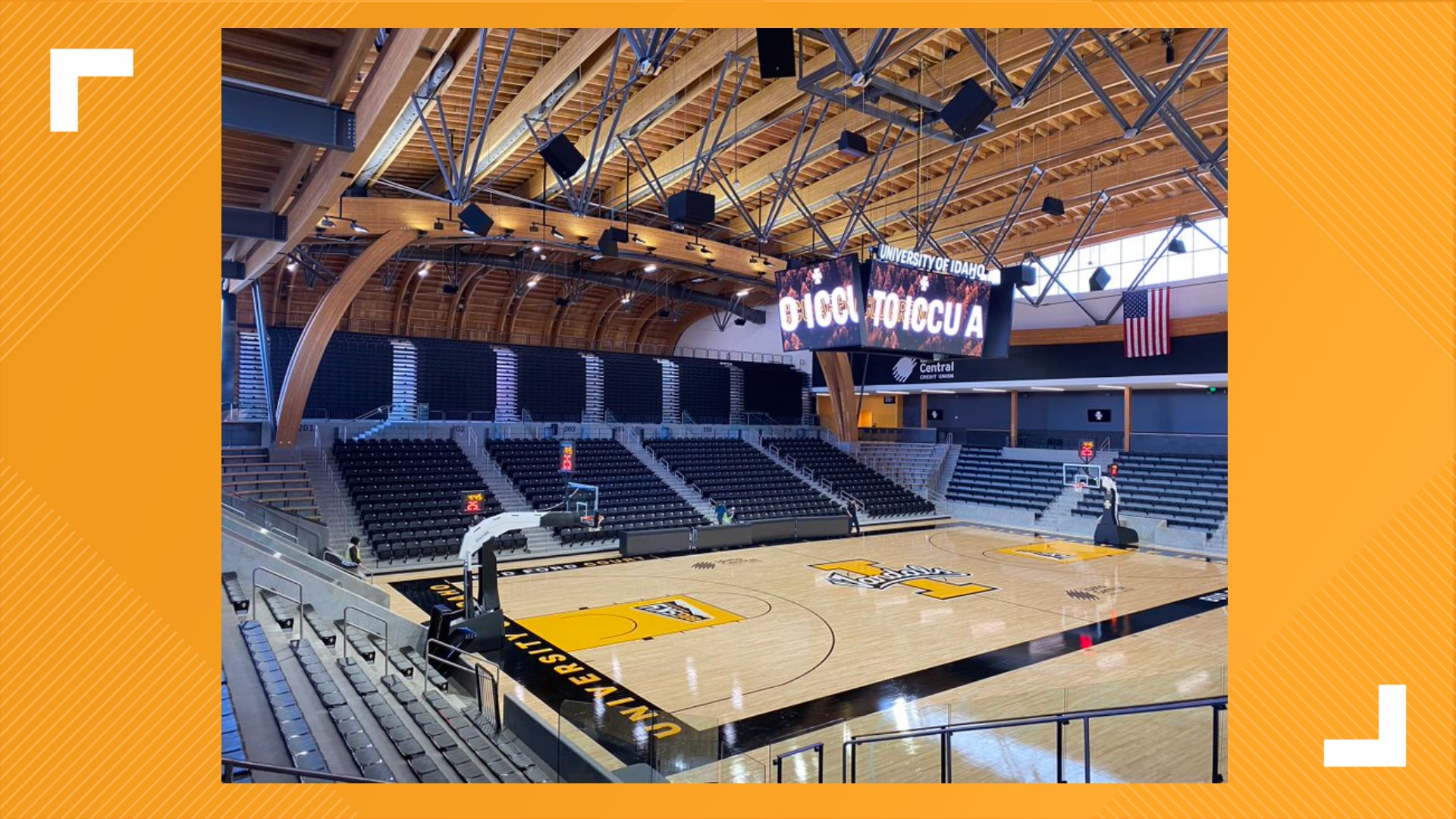 MOSCOW, Idaho — It's hard not to be filled with awe when walking into Idaho's brand new ICCU Arena.

"I mean, look at it," said transfer Rashad Smith gesturing behind him. "It's amazing."

"It just kind of took my breath away the first time," said Idaho women's basketball legend and current  assistant women's basketball coach Taylor Pierce. "I knew it would be amazing, but it's different when you actually get to come in here and see it."

The most striking thing when you walk in is the arena's use of wood. The curved rafters stand out and give the arena a very unique look.

The use of wood was intentional on multiple levels. Idaho has large timber industry and several buildings on campus, including the Kibbie Dome, are known for their use of wood.

"Just coming from Idaho-- I know it's kind of like typical-- but I love the outdoors. I think the wood gives me a good at home feeling," said Quinnett. "You can see there's the roll in the wood. It's like the rolling hills of the Palouse."

"I think the wood has a super unique touch to it that I love," said Idaho junior guard and post Beyonce Bea. "Just the color scheme-- It just pops, and I feel like it could be a really cool atmosphere."

The arena also pays homage to the old Cowan Spectrum, which was the court that the basketball teams played on when they had games in the Kibbie Dome.

The reception area of the offices has the old center court logo. They also incorporated the old baselines into the men's and women's locker room lounge and the old keys in both locker rooms.

The locker rooms also feature state of the art technology with a digital touch pad for coaches. They can use a white board as well that slides up over the touch pad if the coaches prefer that.

The arena also actually contains two courts, as there is a practice court on the backside of the upper arena stands.

In the past, there has been issues with gyms on campus being overscheduled due to demand. Now, the basketball teams have two dedicated courts.

"Taking all the scheduling stress off our staff has been great. We don’t have to worry about PE classes, volleyball, the men’s team, when are they going. There are two courts. There’s two teams. We can practice whenever we want, and that’s been huge for us," said Idaho women's basketball head coach Jon Newlee.

"I think it'll help a lot, honestly," said Bea. "Just having that access for us to come in and get the extra shots up, kind of whenever you want to."

However the biggest impact the arena may have, may be a few years down the line.

"It's a huge game changer," said Newlee when asked about the arena's affect on recruiting. "I'm getting in doors that I never got in before. I’ve lost some big-time recruits because of facilities here. That’s been the only thing. They’ve said, ‘Hey, if you guys had an arena, I would come here.’ They liked everything about it. They just didn’t like where we were playing. That’s kids. That’s players. That’s part of the whole deal. Already, the future classes, the 2022s, 2023s that we’ve been talking to are all blown away by this. The ones we've brought on campus already, they walk in and their eyes get big. Their parents are like, ‘Whoa.’ They’re like, ‘Whoa.’"

There's also hope that the arena could have an impact on the fanbase.

"I think we're going get a lot of new fans coming in just to see what the arena is like. Then they're going see our program and be like, ‘Well, they're really fun to watch, so maybe I should come to some more games,' said Pierce.

For Quinnett, this is a dream come true as someone who grew up in Moscow.

"I remember growing up and watching games in the Kibbie Dome, and I thought that was a big deal. Being the first team to step in here and play a game in here, I mean, that's major," said Quinnett.

The university will host a ribbon cutting ceremony as part of Homecoming Week on Friday, October 8 at 5 pm that the public can attend. The first game at the arena will be October 29 when the men's team will host Evergreen State College in an exhibition matchup.