DNR report: Babb Fire was sparked by branch from diseased tree that fell on powerline

The report suggests the 44-year-old tree should have been cut down before the fire. 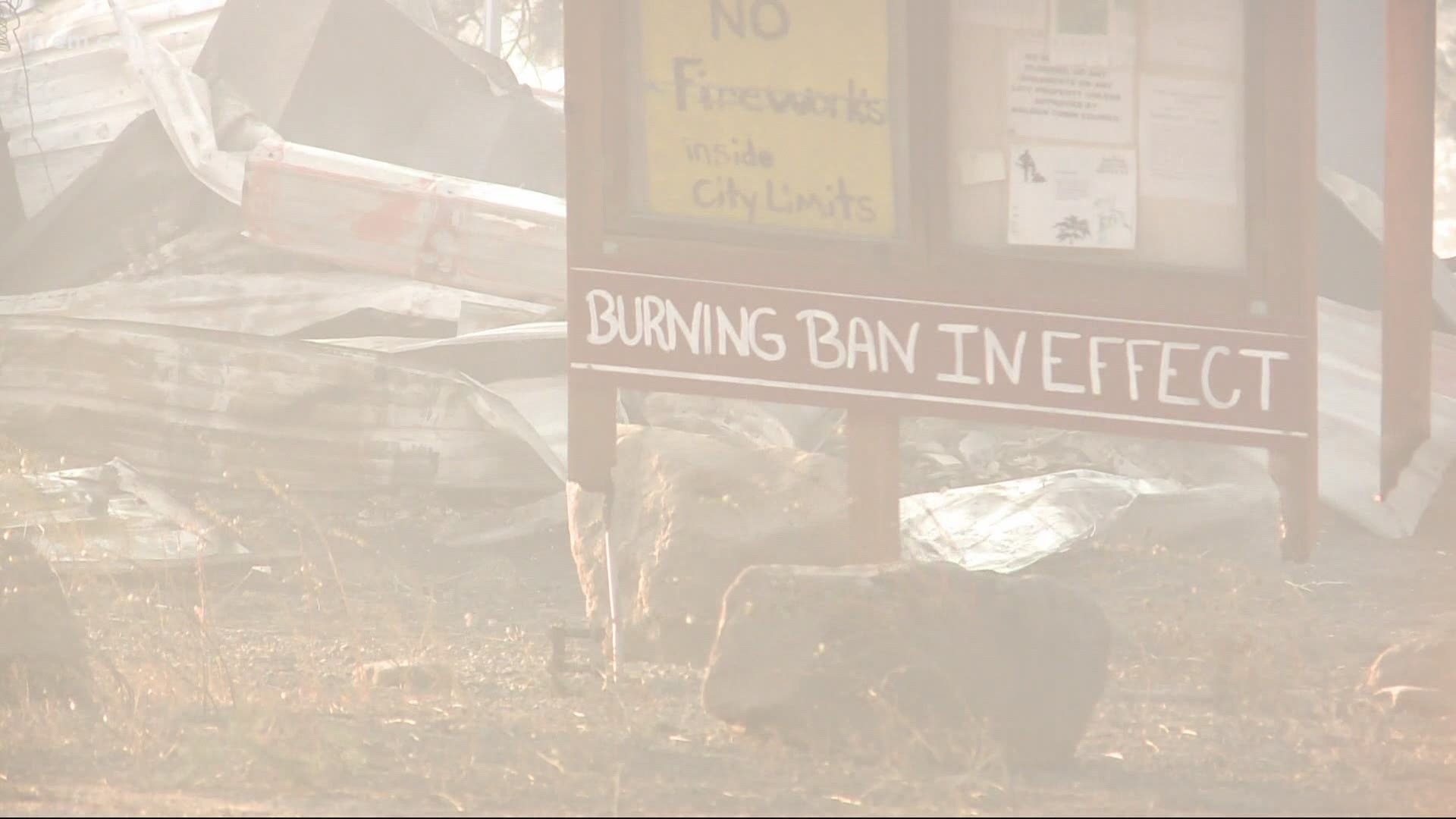 SPOKANE, Wash — The Washington Department of Natural Resources released its final report on the Babb Road Fire that destroyed the town of Malden on Labor Day in 2020.

The Babb Road Fire destroyed over 15,000 acres. More than 85% of all buildings in Malden and Pine City, located in rural Whitman County, burned to the ground in the Babb Road Fire.

The report says the fire started after a Ponderosa pine tree branch fell on an Avista powerline during high winds on Sept. 7. A DNR forest pathologist determined that the tree had several multi-dominant tops, signs of stress and insect infestation. The report suggests the 44-year-old tree should have been cut down before the fire.

About two weeks after the fire started, Avista reported that the likely cause was a powerline. Avista conducted its own investigation into the primary cause of the fires in the region and determined that extremely high winds triggered wildfires and affected utilities throughout the Pacific Northwest, according to a press release.

Avista didn't find any evidence that the fires were caused by "deficiencies in its equipment, maintenance activities, or vegetation management practices," according to the release.

However, the company did discover "instances where, during the course of the storm, otherwise healthy trees and limbs located in areas outside its maintenance right of way, broke under the extraordinary wind conditions and caused damage to its energy delivery system," according to the release.

When investigators got to the point of origin, the report says the tree in question was in a flagged off area and a nearby power pole was on the ground partially suspended by the power lines and the lower portion of the pole was missing.

According to the report, investigators contacted a DNR forest pathologist to inspect the tree. She told investigators the tree in question was damaged by porcupines at a young age and other trees in the area showed similar damage, according to the report. She also pointed out areas where the tree had experienced stress in the past along with signs of Gall Rust disease, a fungal disease found in pine tree, the report says.

The DNR investigator contacted the Avista representative he had previously spoke to and explained to him that he needed a crew to cut down the tree because he was concerned it would fall on more powerlines, the report says. He agreed to find a crew to remove the tree.

On Sept. 16, the report says investigators met with another DNR Forest Pathologist at the origin of the fire to conduct another inspection of the tree. He said the tree had many lateral branches/leaders vying for dominance due to the initial tree top death at an early age, the report says. He also pointed out numerous small holes created by insects and disease and a failure of a branch that had failed some years earlier, likely from high winds or heavy snow, the report says.

Investigators determined the branch falling on the powerline was the cause of the fire.

“Upon completion of the origin area examination and witness interviews, I was able to eliminate several cause categories,” the investigator wrote. “The National Wildfire Coordinating Group has identified nine general fire cause categories according to the ignition source or the general human activity in the where the fire originated. The nine categories are; lightning, campfire, smoking, debris burning, incendiary, equipment use, railroad, children and miscellaneous. All nine categories were considered and using a systematic approach, a process of elimination was used, based on the known facts and details.”

KREM 2 reached out to Avista for comment on the report and that provided the following statement:

The primary cause of the fires on Labor Day 2020 in the region Avista serves was extreme high winds, a weather event that triggered wildfires and affected many, including electric utilities, throughout the Pacific Northwest.

We are aware that during the course of the storm, a lateral branch on a Ponderosa Pine tree located outside Avista’s maintenance right-of-way, broke under the extraordinary wind conditions and caused damage to the energy delivery system at or near what is believed to be the area of origin of the wildfire.

Avista received a copy of and learned that the Washington Department of Natural Resources had completed its investigation and issued a report on the Babb Road Fire on May 14, 2021.  We are in the process of analyzing the findings contained in the DNR report.  To date, Avista has not found any evidence and does not believe that the fires were caused by any deficiencies in its equipment, maintenance activities or vegetation management practices.