Spokane Fire Department's Technical Rescue team trained on the SkyRide to get familiar with how to respond in the event of an emergency. 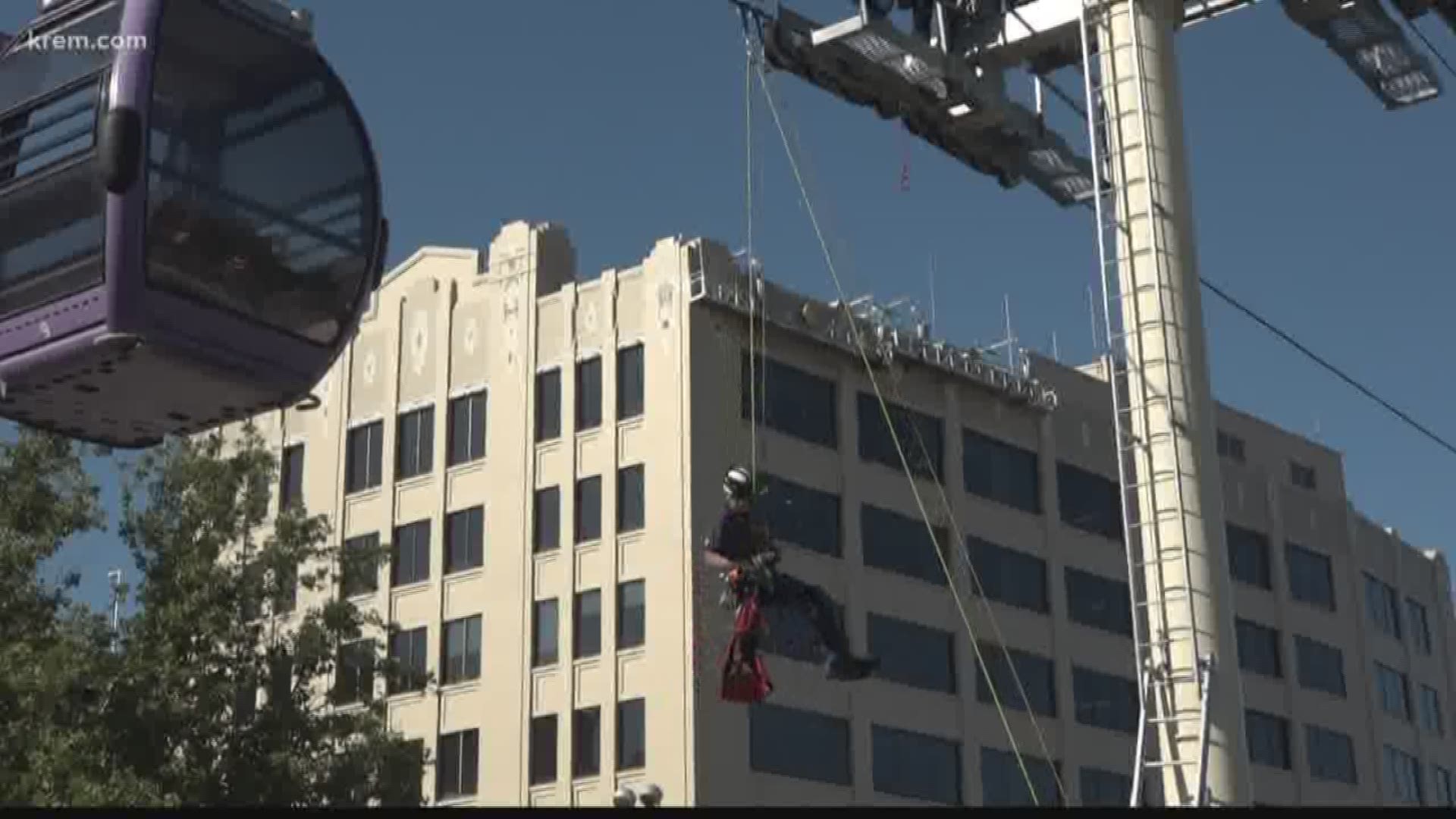 SPOKANE, Wash. — Firefighter's trained for a unique rescue location this week; the iconic SkyRide over the Spokane Falls.

It's the annual training for Spokane Fire Department's Technical Rescue team to get familiar with how to respond in the event of an emergency.

The gondola ride is considered "One of the Top 12 Scenic Cable Rides in the World" in 2013 by Conde Nast Traveler, Daily Traveler and MSN. For less than $10 you can hop on one of the purple gondolas and see some of the best views in Spokane.

"They said the best way to look at the falls is to go on this ride so that's what we're doing," said Nancy Rohde, who is visiting Spokane.

The 15 minute ride takes people face-to-face with the falls, as it gradually descends 200-feet over Huntington Park.

"I'm not usually afraid of heights no, but I don't know about my friends," Rohde said.

The SkyRide was built for the 1974 Expo, the first environmental-themed World's Fair, held in Spokane. The gondola had two routes during the Expo, one was a chairlift over the fairgrounds, the other was a gondola lift that passed over the falls.

Over the years it's had some minor issues, including getting stuck and overheating. It's been upgraded several times ,and according to Captain Andy Bessmer, no one has ever been rescued from the gondolas. However, one person did stay on the ride overnight and got off the next morning.

"We can reach most places with our aerial ladders but there's certain places along the route that we'd have to put a person on top of the cars to help rescue," said Captain Bessmer.

It's why firefighters got harnessed in to practice how to get someone out of the ride if the system fails. Captain Bessmer said they prepared for if the cars jump the tracks or get stuck and they can't reach the people inside.

"We'll go up one of the towers and put a transition line there so when rescuers climb up they slide down the cable to get on top of the car, they'll open up the doors, they'll put a rescue harness on the victim and we'll lower them down," he explained.

There are 40 people on Spokane Fire's Technical Rescue team. They train in four specialized rescues: confined spaces, trenches, urban searches and tower rope rescues. Bessmer said, like any emergency, they are all unique, which makes it critical to practice these scenarios.

More than 150,000 people ride the gondolas a year, and it is popular attraction for tourists. Captain Bessmer said while they haven't had to actually rescue anyone yet, they'll continue training so they're prepared if they ever have to, which gives riders peace of mind.

"They're up there, they're learning how to rescue people, how to get a car maybe unstuck, whatever the problem is, they're practicing at least," said Rohde.

RELATED: 16 people rescued from SeaWorld ride that was suspended over water