The suspect from Coulee City told Spokane police that he was mad at the entire government system and the “elites” within. 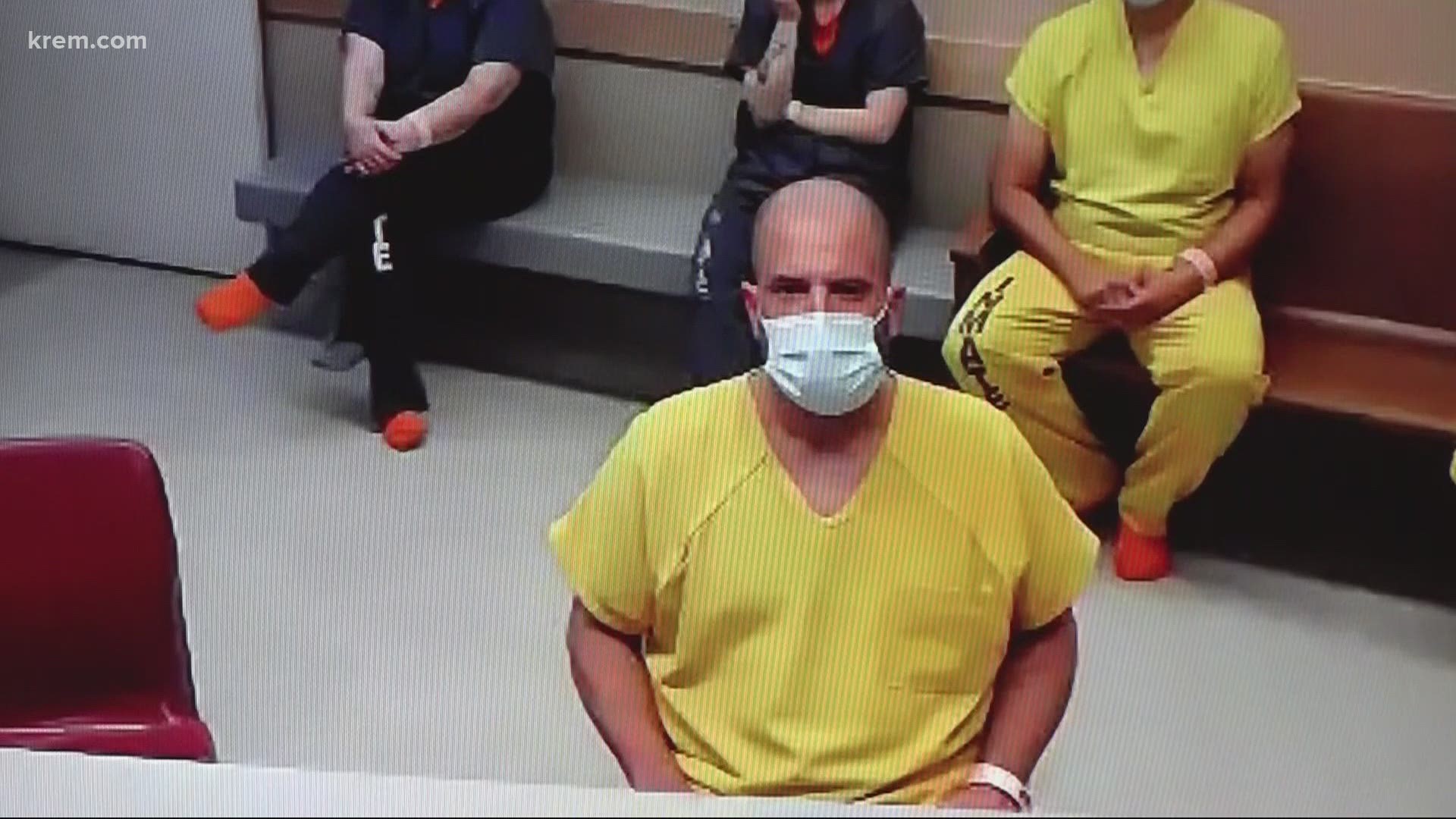 SPOKANE, Wash. — A man who is accused of starting a fire at the Spokane County Democrats headquarters is facing a first-degree arson charge, Spokane police said.

Peter Yeager, 45, of Grand Coulee, Washington, remains in the Spokane County Jail and appeared in court on Thursday afternoon. His bond was set at $500,000. The judge also found probable cause to change him with first degree burglary and threatening to bomb property.

He described himself as a "lone wolf" and said he does not align with a political party, but was angry with the entire government system, police said.

Police said Yeager walked into the Teamsters labor union building on N. Division Street, which houses offices of the Spokane County Democrats, on Wednesday with what appeared to be an explosive device in a backpack.

Investigators determined there was no explosive device in the bag, but it did contain gasoline and oil used to start a fire, police said.

Officers with the Spokane Police Department told KREM's Nicole Hernandez on Wednesday that the man repeatedly threatened to blow up the building and held one person in an office against their will.

Officers were able to get everyone out of the building safely, according to Spokane Police Sgt. Preuninger. Federal law enforcement are aware of the investigation, he added.

Suspect says he does not align with political party

Yeager told Spokane police he does not align with any political party and was not targeting Democrats, according to spokesperson Julie Humphreys. Instead, he was mad at the entire government system and the “elites” within, police said.

He added that he does not belong to any radical or political groups and described himself as a "lone wolf."

Yeager told police that he used a Google search to find a political office, and the Democrats' office was listed first and closest to his location, according to Humphreys.

He also told investigators that he had been thinking about doing something radical for a long time, Humphreys said. His hope was to burn down the building but not to hurt anyone, and he claimed that's why he tried to get everyone out of the building before starting the fire.

Yeager said he created a “manifesto” of which he brought a handwritten copy to the building. It reads in part, "Although I have profound respect for the grassroots movements of both the Democratic and Republican parties, sharing many of their ideals and values, we will continue domestic operations against their ruling elite as they exist in their current form.... Long live the Republic."

The suspect also told detectives he is an Iraqi war veteran and suffers from PTSD, according to Humphreys.

"We are so relieved that no one was harmed in this reprehensible act of violence. Our primary concern is for the safety of our volunteers and the broader community of Spokane. We urge every elected official and community leader to join us in condemning this apparently politically motivated act of violence. No one should have to fear for their life simply because they participate in our political process."

Nicole Bishop, who serves as chair of the Spokane County Democrats, said during an interview on Up with KREM that there were two aspects of the attack that made her feel comfortable connecting it to political motivations.

First, the suspect walked directly to the Spokane County Democrats office and forced his way in, she said. She also mentioned the manifesto that he gave to volunteers.

"With all those pieces together, it seems that there's at least some political motivation," she added.

Tap to watch the full interview

“My thoughts and appreciation go out to those trapped in the Teamsters Building today and our First Responders who secured our safety once again. I condemn anyone who uses fear and violence to accomplish a political goal. Spokane is stronger than fear, and together we stand for peace, justice and a thriving community," the statement reads.

The Spokane County Republicans also released a statement, thanking law enforcement and saying they were glad everyone was safe.

"A man was arrested after bringing an alleged explosive device into the Teamsters building on Division and Indiana. Those offices also house The Spokane County Democrat Party and The Musician's Union.We are glad that all the individuals and volunteers are safe from this frightening and very disturbing experience.  Hate should never be tolerated and we will always denounce all forms of violence and stand against hate.We must as a community stand together against these types of attacks. We want to express our thanks you to the Spokane Police Department and the Sheriff's office for keeping the citizens in our communities safe," the statement reads.

“We share in the outrage and distress of our community in reaction to an attempt to burn down the Teamsters Building yesterday, apparently undertaken to protest government authority.

"Threats, intimidation, and violence will never be tolerated in our community, especially in an attempt to terrorize the community into making system change. Collaborating with the FBI and ATF, the Spokane Police Department promptly arrested the perpetrator, secured the safety of the building occupants and has completed its initial investigation.

"We are grateful for their bravery and that of Shirley Grossman and others who were confronted directly by this man and calmly defused the situation. We will continue to speak up against and condemn all acts of violence and intimidation; and we call on all community members to do the same.

"All people should remain free to participate in their community and governance without fear of violence and retaliation. During these unprecedented times, we are going to continue to see the effects of mental health challenges along with anger and exasperation brought on by national and global events.”