The BNSF Tracks reopened around 1 p.m. on Saturday according to a Boundary county official. 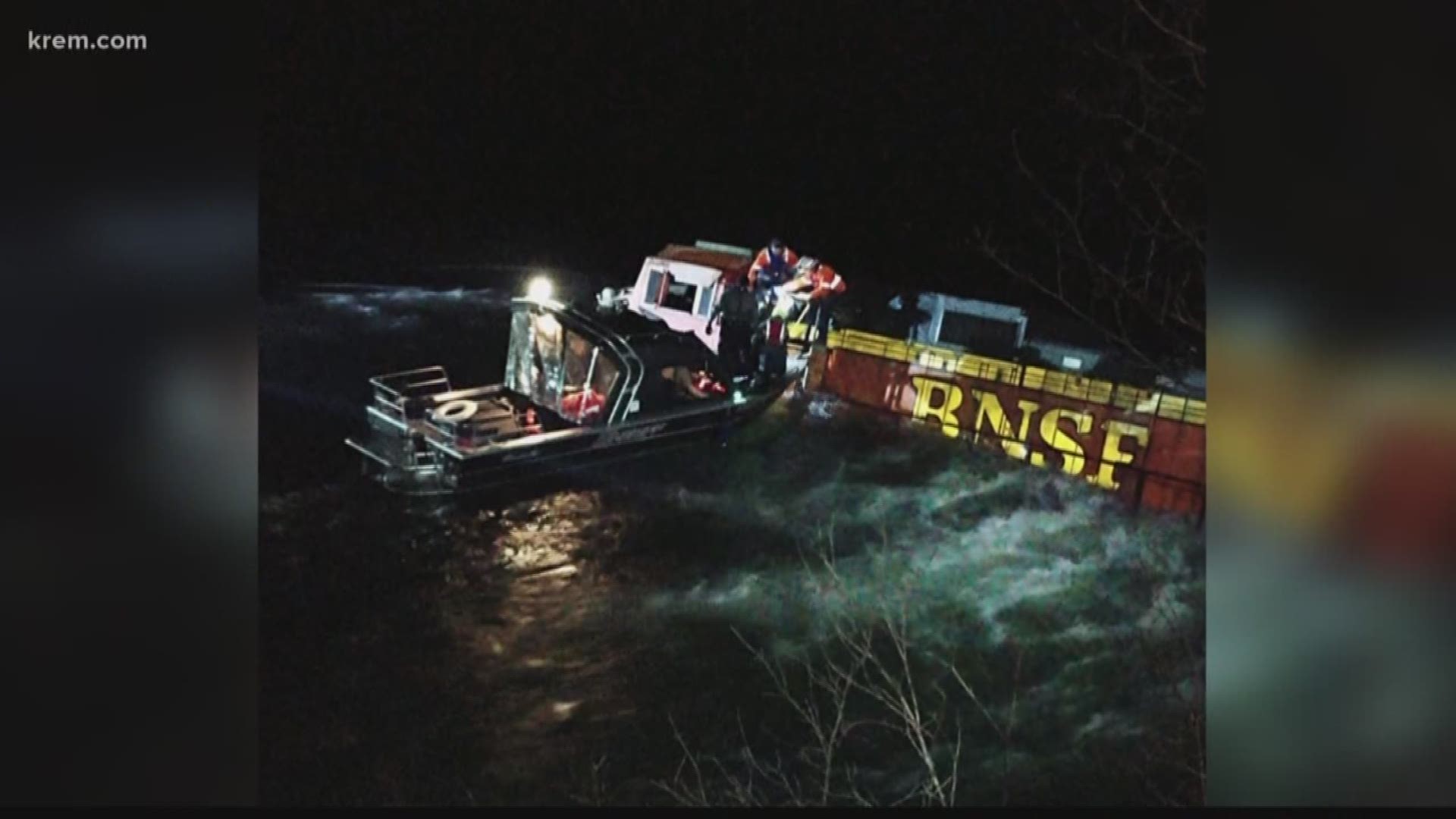 The cause of the derailment of a BNSF Railway train into the Kootenai River in Boundary County on Wednesday morning has been determined to be a rock slide.

According to BNSF spokesman Gus Melonas, crews have determined a rock slide was responsible for sending the train into the river.

Crews hope to have track closed open by Saturday morning.

A BNSF Railway train derailed and entered the Kootenai River in Boundary County at about 8:45 p.m. on Wednesday. The derailment happened about 10 miles east of Bonners Ferry.

Three engines derailed, including one that went in the water, one that stayed on the riverbank and an engine that stayed near the rail, according to BNSF. Six empty cars near the back of the train also derailed.

A two-man crew was rescued from the engine and neither needed medical attention, according to BNSF.

"Very unknowing. A lot can go wrong in a situation like that. It's dark, multiple things going on at once. We got a train that's hanging off in the water, still not secure. We have people on the train, people on the water," said Caleb Watts with the Boundary County Sheriff's Office.

BNSF Railway spokesman Gus Melonas told The Associated Press on Thursday that crews have rerailed the six cars. One car had a load of steel while the five others were empty. One locomotive is still in the river, Melonas said, adding railway officials will determine the best way to get it out of the water.

BNSF spokesperson Courtney Wallace told KREM that geo-technicians and other experts are on site to help with the positioning of equipment, assessing the stability of the slope and the cleanup process. Plans are also in place to replace the damaged track, she said.

The only access to the area is by train or boat.

On Thursday, the Boundary County Board of Commissioners issued an emergency ordinance prohibiting boat traffic on the Kootenai River from the Deep Creek Boat Launch to the Montana border.

The Boundary County Sheriff's Office said on Wednesday that the train was leaking diesel fuel into the river.

Wallace said containment booms have been deployed at multiple locations to contain any fuel that leaked from the lead locomotive, adding that it is unknown how much diesel entered the river.

"We continue to work closely with response agencies," Wallace wrote in a statement to KREM.

There are no houses or businesses in the vicinity.

The State of Idaho has been notified and the state's Department of Environmental Quality will be involved going forward, according to the BCSO.

The train was traveling from Minnesota to Pasco, Washington.

Forty trains use the track daily including company freights and Amtrak passenger trains traveling between Seattle and Chicago, Melonas told The Associated Press.