Private liquor in Washington state: Are we better off?

Washington voters decided liquor would be privatized in 2012. But has this decision paid off so far? 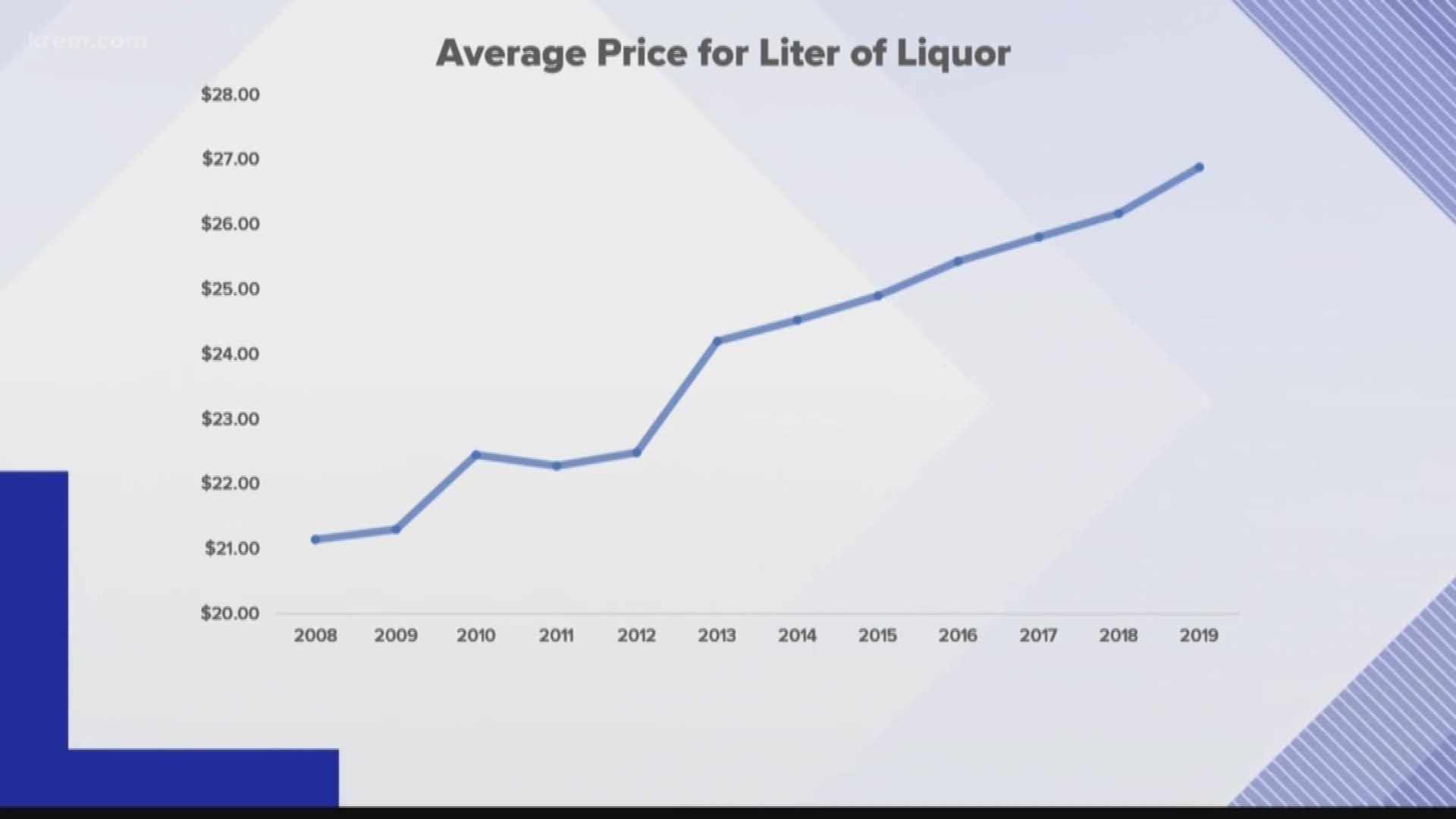 SPOKANE, Wash. — Washington voters decided eight years ago that they wanted to buy their booze at local grocery and big-box stores instead of at state-run liquor stores.

Voters passed Initiative 1183 in 2011, which privatized the sale of liquor in Washington. Stores with more than 10,000 square feet in floor space could sell liquor, as well as any business located inside a building formerly used as a state-run liquor store. The state auctioned these buildings off after the vote.

Hard alcohol can now be bought in stores like Costco, Albertson’s, Safeway, Walmart and more. In fact, Costco broke records by spending more than $20 million in support of the initiative.

But it raises the question: Are we better off?

There are many ways to answer this question. The main points KREM investigated were the price difference, liquor selection and how much tax revenue liquor sales has generated for the state.

According to data from the Washington State Department of Revenue, the average price for a liter of liquor has gone up nearly 20 percent since privatization. When you take inflation into account, the increase is just under 8 percent.

Harry Wilson, a manager at a local Rosauer’s, said pricing has become competitive despite the average being higher than when hard alcohol was sold by the state.

He also said this competition can lower the prices of certain liquors, resulting in the consumer saving money.

“Some liquors are [cheaper]. There’s no doubt about it,” Wilson said. “So it just depends on which venue you’re talking about and what their profit margins are.”

Despite this competition, customers are often seeing higher prices due to taxes.

“From what I hear from customers, because of the amount of taxes that [the state is] charging, it’s a little more expensive now to buy it in the store,” Wilson said.

This wide selection of options means big-box stores can buy their liquor in bulk, allowing them to pass on better deals to the customer. But not all stores selling liquor privately are excited about these bulk options.

Egger’s South Hill Liquor is one of two stores in Spokane County selling liquor out of a building that used to be a state-run liquor store. Smaller stores, like Egger’s, can’t afford to buy in bulk in the same way big box stores can.

Egger’s works in smaller margins to get by.

“If I wanted to run on a huge, a higher profit margin, I would be so priced out,” Egger said.

The other way that Egger remains competitive is by developing a loyal clientele by holding promotions, offering a wide selection and taking special orders from customers.

“If they’re looking for something and we can find it, we bring it in for them,” Egger said. “You won’t find that at the big-box stores or the grocery stores.”

Egger’s decision to offer a wide, flexible selection of liquor brings up a second metric to measure whether or not Washington residents have been better off since the privatizing of liquor: the variety of hard alcohol available for purchase.

Walmart and Target had the smallest selection among the big-box stores we checked, with only 12 different varieties of bourbon available at a randomly selected location. Rosauer’s only had 13 varieties, with Trader Joe’s only doing two better at 15 total varieties. WinCo and RiteAid were also in the teens, with 17 and 19 respectively.

The rest of the big-box stores included Fred Meyer with 27, Safeway with 31, and Albertson’s with 33.

These pale in comparison to the Idaho store, which had 76 kinds of bourbon.

But Total Wine in Spokane blew the Idaho store out of the water. The specialty alcohol store had almost 100 more options when it came to bourbon, with a total of 168 varieties available.

Egger’s also holds its own when it comes to variety. Customers can find 51 varieties of bourbon at Egger’s, and if they don’t have a certain type, the staff will try to find a way to make a special order.

After all the counting is done, are we better off when it comes to variety? Well, it really depends on a person’s location and what they’re looking to buy.

Those close to a specialty store like Egger’s or Total Wine may be happy with their choices, while those who rely on grocery stores for hard alcohol are much more limited.

But most customers aren’t looking for rare or specific liquors, and many prefer the convenience of being able to their favorite spirit while shopping for groceries, according to Wilson.

“It’s about convenience for the customer. It’s here for that person that doesn’t want to have to drive all over and hunt for something,” Wilson said.

That brings us to the last metric we measured: state tax revenue from hard alcohol.

The question of whether or not the state is better off in terms of tax revenue is hard to parse, because data is spread out among multiple state agencies.

When the state sold liquor, its revenue came from sales taxes as well as the outright profits of the sales.

Now, revenue comes from those same taxes, but instead of sales, there are new spirits fees.

Making this even more difficult is the fact that the LCB also collects taxes from the sale of marijuana, and in reporting their net revenues, some of that data gets jumbled up.

If you separate the numbers as much as is possible, the data shows a sharp drop-off in "profits" from liquor after privatization. In this case, we're using the "profits" as shorthand for the total amount of revenue liquor generates the state, less some expenses. Basically, it means the amount of money that can be put into various funds to pay for state and local programs.

In 2012, the state saw the highest total profits, as stock was sold off and stores started paying new fees, with the two agencies reporting a total of $773.87 million in profit.

The revenue has seemingly started to recover, as liquor generated $463.58 million in profits for the state in 2018.

But this still remains lower than revenue levels when the country was in a recession.

Although the state is collecting more in taxes and fees than it used to, that increase does not appear to be enough to offset the lost revenue from no longer selling booze outright.

It appears that in terms of state revenue from liquor sales, we aren’t better off.

RELATED: Disneyland is now serving alcohol for the first time

Are we better off?

Whether Washington is better off for privatizing liquor sales depends on what’s being considered.

In terms of tax revenue and selection, it appears Washington was better off keeping liquor sales state-ran.

If price is the sole factor considered, the change has also been for the worse, but only marginally.

But in terms of convenience, many people likely are happy with being able to buy hard alcohol at the same place they buy groceries, instead of having to go to a state-run location.