Dr. Frank Velazquez obtained his M.D. at the Universidad Central del Caribe in Puerto Rico and a master's degree in healthcare management from Harvard University. 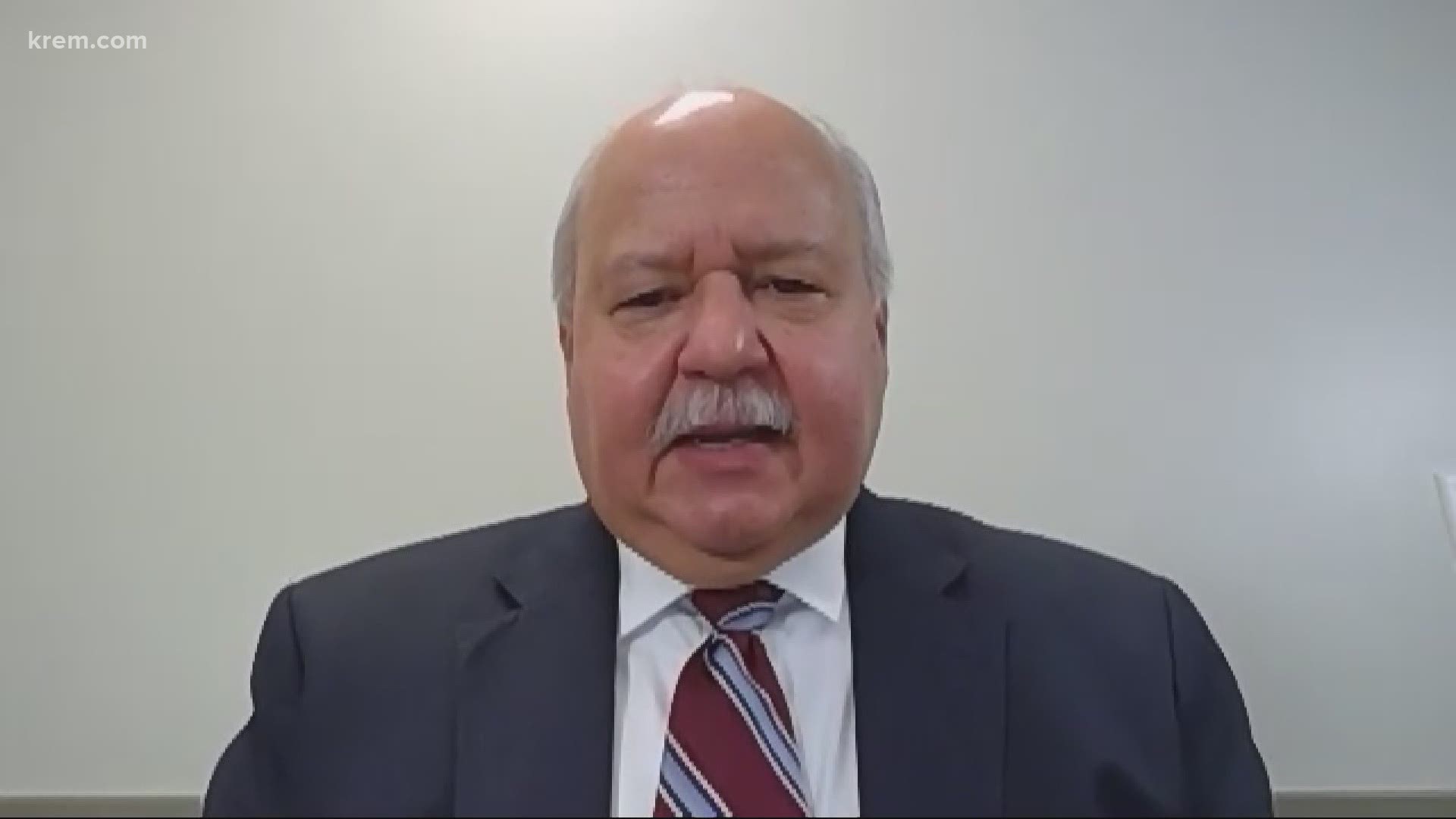 Immediately after the vote to fire Lutz, the board voted unanimously to replace him temporarily with Dr. Francisco "Frank" Velazquez.

Velazquez said he'll, technically, be working part time but he promises to do whatever it takes, for as long as it takes.

He also wanted the community to understand, he is not coming into this position cold. He said he has been involved in the local COVID-19 response, as part of a testing task force for the state and region.

Most of Velazquez's recent work appears to be in medical consulting and administration, but he is a doctor.

According to his LinkedIn profile, he obtained his M.D. at the Universidad Central del Caribe in Puerto Rico, then later a master's degree in healthcare management from Harvard University.

He was formerly the president and CEO of Pathology Associates Medical Laboratories, a Spokane-based lab company.

KREM 2’s Whitney Ward spoke with Velazquez Thursday about his appointment and the work that needs to be done as coronavirus cases rise across the state of Washington.

Below is an excerpt from the interview. It has been lightly edited for clarity.

Dr. Francisco "Frank" Velazquez: "I said, 'You know, if I'm the right person, and I can help, and that's what I can do for the community, then I'm happy to do it.'

Whitney Ward: "You're coming in at this time where we are seeing so many cases spiking right now, what does that tell you about what we've done so far and what we need to move forward and get those numbers down?"

Ward: "Do you see in the next weeks or month, any kind of rollback on restrictions in the community, going back to Phase 1, for example, or some version of that?"

Velazquez: "Not to the best of my ability, not that I know of. Right now, we have moved forward, and unless there's guidance to the country, we'll continue to take a measured approach, as we've done."

Ward: "So, you don't have any intention, as the health officer, of rolling back any kind of restriction, whether it's at the community or at the school district level?"

Velazquez: "Well, rolling back is a very strong word, and I'd like to say, not at this time. We will follow the science and data and that will tell us what we need to do."

Ward: "You said you don't want this position on a permanent basis. Why is that?"

Velazquez: "So, I wanted to make clear, I'm not coming in to take anybody's position because I'm not. I was not thinking about becoming a Public Health Officer until Friday. So, it's not something I have pursued. It's not something I have aspired to, or asked for, but it's something I see as a call of duty for me. So I'll be happy to wear that title for however long I need to do that."

Ward: "After what happened, are you concerned at all about political influence in the public health realm?"

Velazquez: "I'm going to leave what happened in the rearview mirror because I'm looking forward. So, I'm a physician first, I'm a doctor first and I'll always be a doctor first. I don't bring to the table any kind of political advice or influence, nor do I think it's going to impact what I think we need to do. My job here is, and I put my doctor hat on Friday and I'm going to keep it on until we're done. And that's what's going to guide me from here on."

Ward: "Some have also criticized the health board for being made up of so many political voices, and not medical professionals, such as yourself. We don't have any actual MDs on the board. Does that concern you?"

Velazquez: "The way I look at it, and I think some members of the board alluded to that, that this is an opportunity for us to improve. I always take every challenge as an opportunity to do better and I do believe the board acknowledges the fact that there's some things that, going forward, we may have to do differently."

Ward: "There are also a lot of people there, who are employees of the Regional Health District, who very much supported Dr. Lutz. How do you intend to kind of heal the damage that exists and reach out to all of the employees in the health district as the new interim health officer?"

Velazquez: "I think the best way to do that is by communicating. And I'm pretty honest about it. Like I said, I know Dr. Lutz. I collaborated with him. I have a lot of respect. That hasn't changed. But he's not here and the job needs to get done, and I'm here to get it done. And all I ask from them is the opportunity to be of help, assistance and support. The work here has continued to happen, and it will continue to happen. Because we have highly qualified people all over in this building, that are doing their job every day."

"My goal is to make sure I can support them, provide guidance when needed, and help them wherever I can. And likewise, they'll do that with me and for me. Because at the end of the day, it's not what I can do, but what we can do."