Stormin Norman's Shipfaced Saloon posted on Facebook that the Liquor Control Board threatened to pull the bar's liquor license permanently if they opened up. 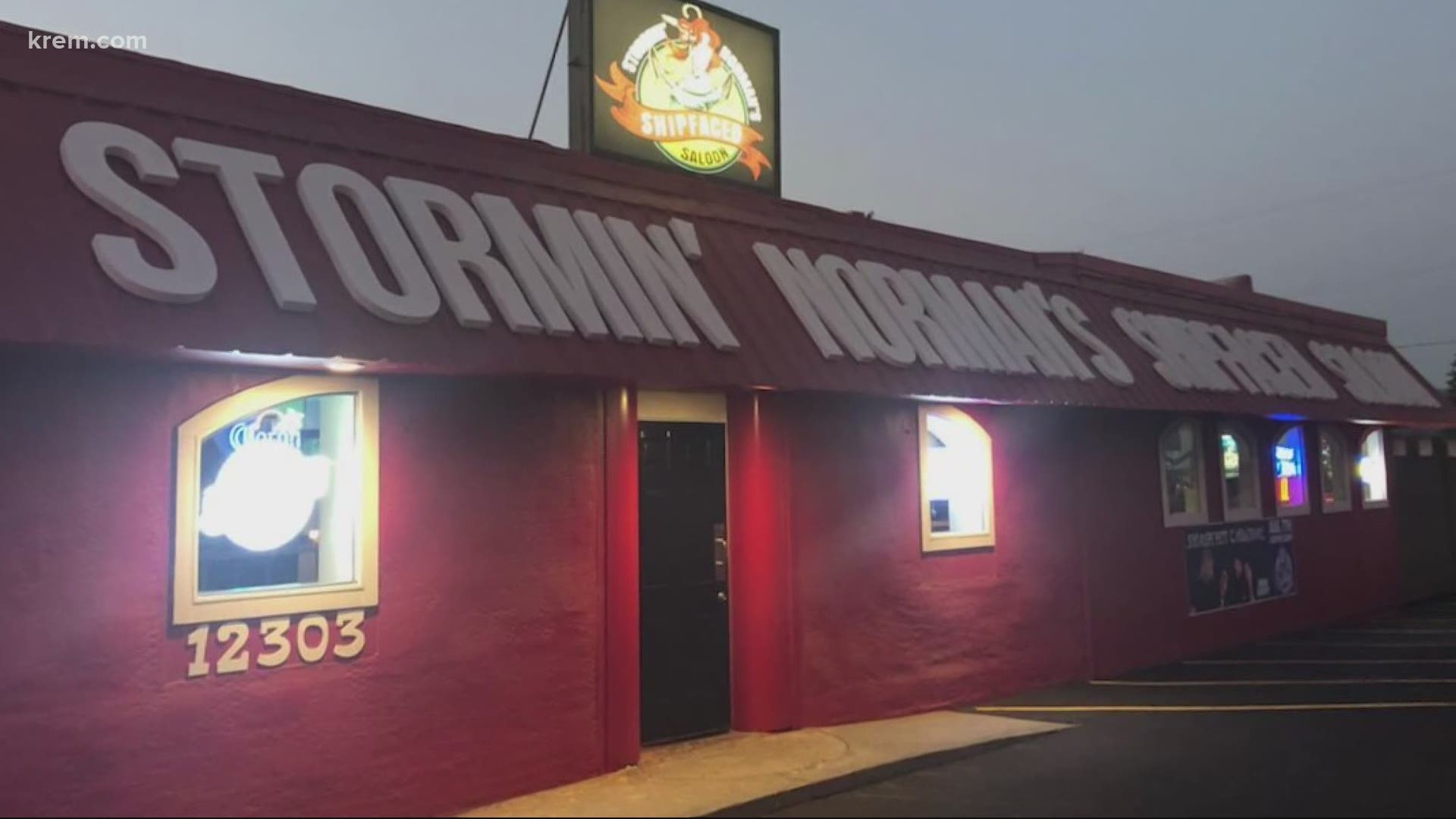 SPOKANE VALLEY, Wash. — A bar in Spokane Valley that initially planned to follow another's lead has decided to remain closed for indoor dining after a warning from the state Liquor Control Board on Saturday, according to its Facebook page.

On Dec. 8, Gov. Jay Inslee extended the closure of indoor dining and other restrictions through Jan. 4.

The Liquor Control Board threatened to pull Stormin Norman's Shipfaced Saloon's liquor license permanently if they opened for indoor service, the bar wrote on Facebook.

"As we have stated since the beginning of this whole ordeal, we are doing this for our employees and their financial needs, but if we get shut down, that won’t help them at all," the restaurant wrote on Facebook.

In an email to KREM, the bar said they will be speaking with a lawyer to determine their "legal recourse, if any." The restaurant also said it will remain open on the patio and for takeout, along with donating 12% of the bar's sales directly to employees.

On Wednesday, the bar and grill wrote a post saying they would reopen on Dec. 26 for business as usual. The post came after another Spokane Valley bar, The Black Diamond, announced it was reopening for indoor service.

In a Facebook post on Tuesday afternoon, The Black Diamond shared a photo of a sign that says, "Our bill of rights trumps Inslee's tyranny." The business also wrote in the post that it is "now open, fully, from here on."

"We do this so that our employees, who are running out of unemployment, can make a living and survive," the bar and restaurant wrote in part.

The bar first received widespread attention when it remained open in May during a statewide stay-home order after receiving a violation notice from the Washington State Liquor and Cannabis Board (LCB).

Julie Graham, a spokesperson for LCB, said on Thursday that the agency is aware of the concerns at The Black Diamond and currently investigating.

The business has received three verbal warnings and two administrative violation notices, which are formal citations, for COVID-19-related violations since March 2020, Graham said.

If the business is currently open in violation of COVID-19 restrictions, LCB could pursue an emergency suspension of its liquor license, Graham added.

The Black Diamond acknowledged in its latest Facebook post that the business will face "a possible citation and suspension of our liquor license."

"But at this point we would rather get this citation and fight it so that our employees can make a living. We want them to have a happy and stress free holiday season," the post continues.

The Black Diamond's management team wrote that it will be "following all the guidelines we have been for the past 8 months."

"We ask that anyone who may be sick do what they have always done when sick. Stay home. We also ask that if you are in the high risk category you take the time to contemplate and make the decision for yourself if you would like to come and support us," the post reads.

The Black Diamond and Stormin' Norman's are two out of many businesses in Spokane County that has been hurt by COVID-19 restrictions.

Players & Spectators II, an event center in Spokane Valley, announced on social media in November that it would permanently close following Gov. Inslee's first announcement of new restrictions. The owners of Kalico Kitchen said they have let go of 30 employees.

Mackenzie River Pizza, Grill & Pub in North Spokane, River Rock Taphouse, Cheap Shots, Sapphire Lounge, Party Palace and Tomato Street in River Park Square announced that they were closing for good during the first round of restrictions that went into effect in March 2020.