A petition signed by more than 5,000 people also demands that Gonzaga conduct an "exhaustive search to find the individuals responsible for the hate crime." 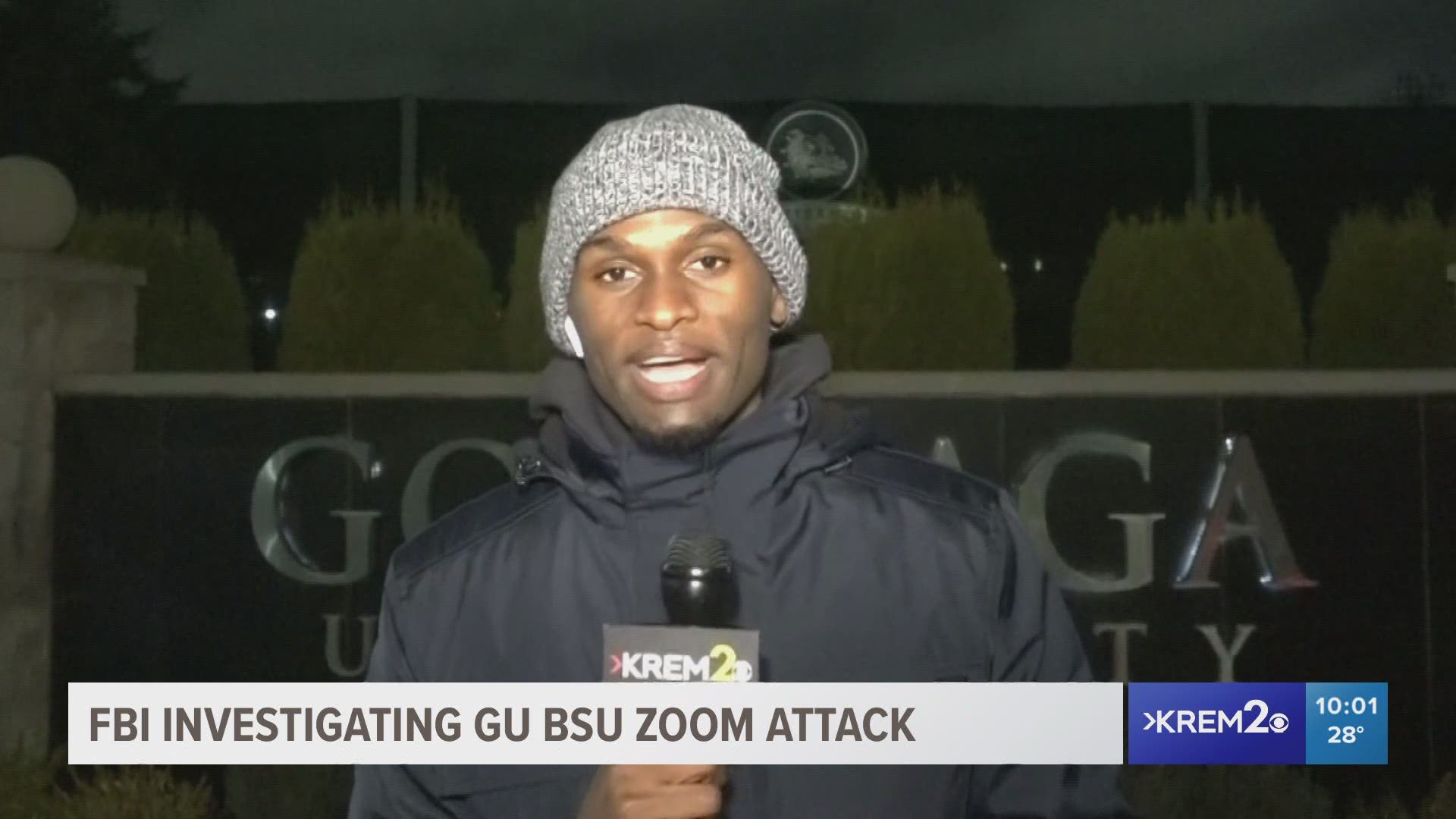 A video shared with KREM 2 shows an unknown user with their camera off joining the Zoom call during the meeting on Sunday, Nov. 8. Several voices can be heard shouting slurs at Black Student Union members.

KREM 2 has chosen not to share the video out of respect for the students on the call and also due to the language in the video.

In an update sent on Wednesday afternoon, Gonzaga President Thayne McCulloh said the university's Information Technology Services Department captured data and conducted an initial forensic analysis on the attack. Campus Security and Public Safety then reached out to law enforcement for assistance.

Two detectives with the Spokane Police Department’s Criminal Investigation Unit have been assigned to this case and the Federal Bureau of Investigation (FBI) is also facilitating a preliminary review and investigation, McCulloh said. Initial analysis shows that the IP addresses of the attackers are both domestic and international, he added.

"We are aware that other universities and organizations around the nation have been targeted with similar attacks in recent months, and we are learning from their experiences. We are committed to doing everything possible to identify those responsible and hold them accountable," McCulloh wrote in part.

As far as what could happen to those responsible for the incident, McCulloh said disciplinary action could include "include expulsion from the University. Should the incident involve an employee, policies governing employee misconduct and overseen by Human Resources would apply."

The Change.org petition started by a group on Gonzaga's campus called United Students Against Sweatshops (USAS) demands that the university conduct an "exhaustive search to find the individuals responsible for the hate crime committed" against the Black Student Union and "immediately expunge" them from the community. It also calls on the university to "take action to combat hate speech and create an active anti-racist campus."

More than 6,500 people have signed the petition as of Wednesday afternoon.

The petition also states that the act against the Black Student Union is one example of the university's failure to "meaningfully and substantially address the problem of systemic racism" in the Gonzaga community.

Gonzaga University's President Thayne M. McCulloh took to Twitter moments after the incident on Sunday to address it and call for unity for Gonzaga’s Black students.

This afternoon, members of the @Gonzaga_BSU were subjected to the vile, hateful, racist and homophobic statements by anonymous individuals who infiltrated their organization's meeting online. I am sickened by this disgusting hate crime and denounce those responsible for it.(1/3)

in support of our Black students, to make clear our commitment to being a community of safety and support & to live out the true meaning and purpose of our mission, which is to foster a mature commitment to the dignity of the human person. Statement here: https://t.co/tU5RYLaYEA

“We will not accept any statements of solidarity, or any promises made by you, unless they are followed by tangible actions," the Facebook post reads.

On Wednesday, McCulloh sent a message to all Gonzaga students, alumni and staff.

The message included the following statement about what the university is doing to support and protect Black students, specifically those present at the incident.

We are deeply disheartened that we must identify ways to maintain safety and security in virtual meeting experiences, but that is a clear reality. Students, clubs and organizations, and employees have been alerted to the safety features available through Zoom, as well as guidance on how to make meetings private. We are also implementing internal information technologies within our own systems to help protect our community from interference and intrusion of any kind. Our BSU students have requested the services of a therapist from the Black, Indigenous and People of Color (BIPOC) community, and in addition to securing those services, we are very close to hiring an individual to join our staff. We fully support this addition to our team.

We are cognizant of the fact that this incident has engendered fear and distrust among our BSU students. Yesterday, November 10, 2020, the Office of Diversity, Inclusion, Community and Equity (DICE) supported a Student Healing Circle – a safe space for students to process how they are feeling, while at the same time centering the voices of BIPOC students impacted by the attacks. Participants discussed ways of providing support and healing as we move forward. The DICE office works to provide a safe space, mentoring, and group dialogue focused on identity and inclusion on an ongoing basis.

Numerous divisions and offices here at Gonzaga have sent messages of support to the BSU, pledging specific actions they are taking to create a safer, more inclusive community. There are many departments within the University that have committed their professional development programs this year to diversity, equity and inclusion. We are grateful to the many individuals who have reached out to our University with supportive gestures of concern and care for the students who experienced this horrible incident. Our extended community, too, has offered support and assistance, including Kiantha Duncan from Spokane’s NAACP Chapter, Terri Standish-Kuon, president of the Independent Colleges of Washington, John Culton from the Office of Senator Patty Murray, Shari Clarke, CDO at Eastern Washington University, and Logan neighbors.

"The racist and homophobic slurs directed at the BSU’s members last Sunday at their biweekly meeting by anonymous users are unacceptable. These hateful acts have no place in Gonzaga’s community," he wrote in part.

GU Choirs stand with Gonzaga’s Black Student Union and all LGBTQ+ and African American community members. The racist and homophobic slurs directed at the BSU’s members last Sunday at their biweekly meeting by anonymous users are unacceptable. These hateful acts have no place in Gonzaga’s community.

As singers in this community, we recommit our dedication to celebrating underrepresented voices in choirs by integrating music into concerts by composers from diverse backgrounds, honoring musical beauty in all cultural traditions by music with integrity and by learning from culture bearers. As Choir Council leaders, we recommit ourselves to continuing the conversations of access, belonging, and inclusion in our choral ensembles and acting decisively to counter racism. As a faculty member, I redouble my efforts on the CAS Diversity, Equity, and Inclusion Council; on the Gonzaga Institute for Hate Studies Advisory Board; and by actively decolonizing repertoire and teaching practices in choral classrooms and performances, expanding what music we sing and how we learn it beyond the Eurocentric canon and discriminatory practices. I redouble efforts in this work on Gonzaga’s campus and in my roles in ACDA and WMEA. We all commit to sustained efforts against racism and homophobia to work towards a more just community in which hate is replaced by compassion, respect, and belonging.