The five-year revitalization process is wrapping up as Spokane Parks and Recreation unveils the North Bank of Riverfront Park on Friday. 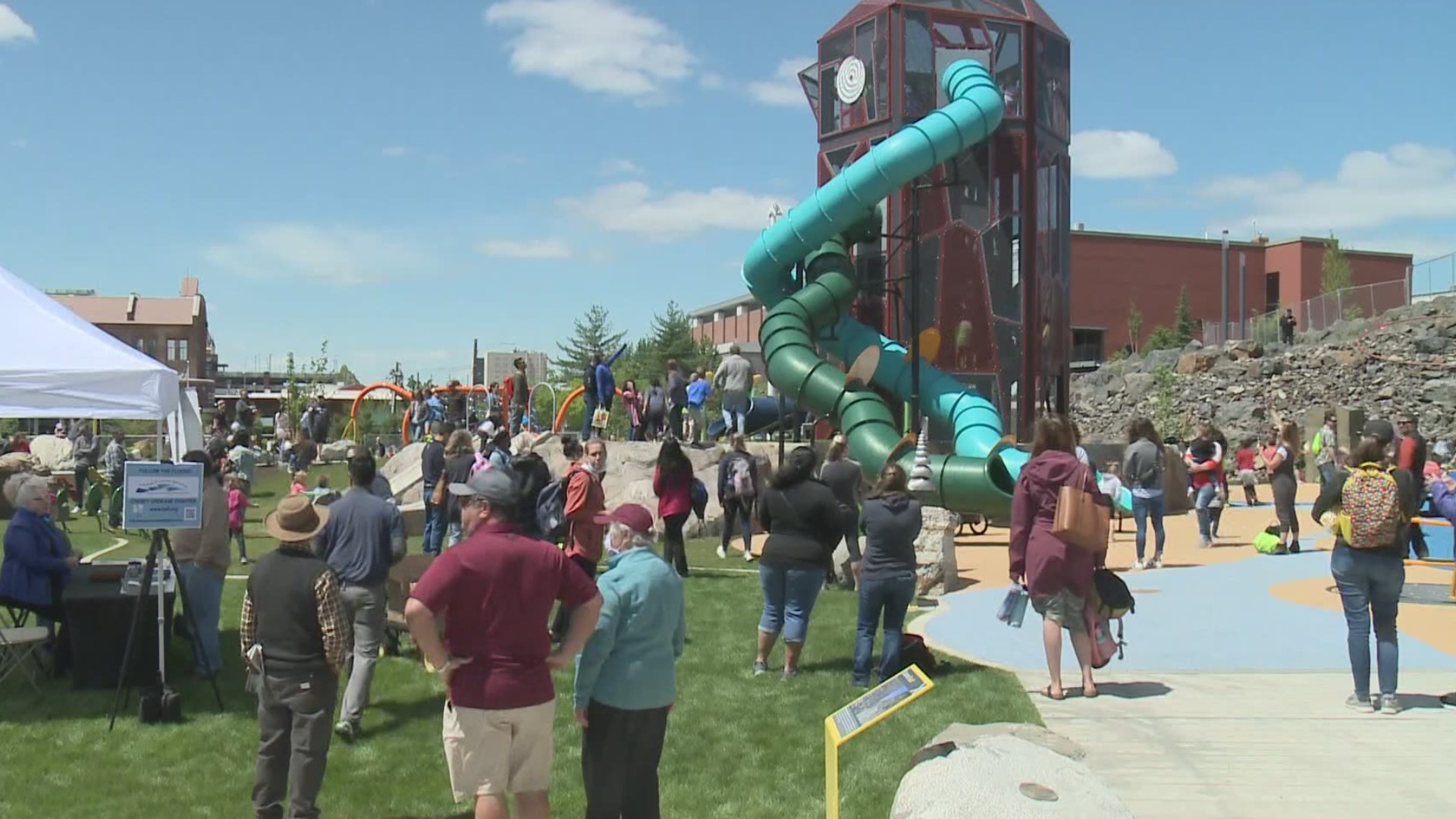 SPOKANE, Wash. — The Ice Age Floods Playground's grand opening was packed with people of all ages on Friday in Riverfront Park. This recreational area is just one piece of the $75 million-dollar revitalization project started by the City of Spokane's Parks and Recreation department.

Construction on Riverfront Park has been a work in progress over the last five years and is almost wrapped up. Redeveloping major spaces in Spokane seemed like just a faraway dream a decade ago. That year, Parks and Recreation pitched an $100 million master plan for Riverfront Park changes.

"It's a lot of visions that have been in the works for a long time, it’s a very special feeling," Parks and Recreation Director Garrett Jones said. "It really gave me goosebumps, you know, for this process really back in 2012. I had goosebumps, really."

Woodward remembered when the community voted to pass the multi-million dollar bond for five key projects that the Parks and Recreation department submitted.

"Seven years ago when that was passed, I was reporting on it," she added. "Now, who would have known that seven years later, I would be Mayor of Spokane, doing the ribbon cutting and celebrating what we've done with this park."

She anchored KREM 2 News for 20 years and continued in local news before leaving the business to campaign for city mayor. She has watched the city grow since 1990.

"This is the last major of the five projects, as part of the redevelopment project will be coming to an end, and opening up to the public tomorrow," Jones added, in an interview Thursday afternoon. "I got to tell you that the transformation of the North Bank is one of the largest transformations in the entire project."

The cost of the entire North Bank project is $12.2 million: $10.7 million from the bond and $1.5M from grants and donations, according to their press release. Construction began in February 2020. The area opened to the public at noon on Friday.

"You look at the development that's going on in this area, we've got the Podium that overlooks all of this, the Spokane stadium that's gonna be built right next to this, the Wonder Building," Woodward said. "[All of] that is going to transform and grow even more development, so it's a very exciting time for Spokane."

The 40,000-square-foot playground is designed after geological events that shaped the region. People of all ages can enjoy a three story Columbia slide tower, Glacial Dam splash pad and even a fossil dig.

The North Bank also features a space for Hooptown USA Courts, which includes five half-courts or two full courts with speakers. The courts will be painted with a colorful mural in the summer of 2021.

The Skate and Wheels Park is also part of the North Bank and includes a transitioned wall ride and two bowls which utilize the wall of the maintenance building for a near-vertical wall ride. The design also incorporates a flat bar that used to be part of the Under the Freeway (UTF) skate park.

A performance climbing boulder funded by the Jess Roskelley Foundation will also open on Friday. The body of Roskelley, a Spokane native and avid climber, was found near an avalanche in the Canadian Rockies in April 2019.

Construction began on the monumental redevelopment plan in 2016, by 2020 four of the five main aspects were finished. The Tier 1 projects include the skate ribbon and SkyRide facility (2017), updated Looff Carrousel building (2018), renovated US Pavilion (2019), the Howard Street Promenade (2019), and now the regional playground (2021). Additional projects on the master plan were completed with a mix of bond funds grant funding, or private donations. All together, they had about 74.2 million to work with. These additional projects are the Rotary Fountain and the Providence Playscape, the city’s first all-inclusive playground.

Jones said they are thrilled about unveiling the new features, because the city needs something to be excited about.

"It really puts Spokane in a great position to move forward, especially out of the pandemic, when you talk about physical and mental health of the citizens and creating that positive atmosphere, to the economic development piece of it as well," Jones said. "Riverfront Park and our downtown is our crown jewel, and it's where the conventions, the sporting events and concerts are. And that brings people together and that also helps us maintain and support our local businesses around this region, too. So it does seem like it's all kind of coming together at once, but I think we're all leveraging off of one another in that energy and that excitement and great future for Spokane."

Woodward agreed, citing how the city has shown such a desire to be out in nature the past year.

"They served such an incredible purpose during a global health pandemic," she added. "I think that really gave people an idea of what our parks can be."

Some community members that went to check out the grand opening of the playground, new sculptures and skate park got vaccinated at the same time. MultiCare partnered with Riverfront and the city to provide a drop-in COVID-19 vaccination from 3 to 7 p.m. They only had the Johnson and Johnson vaccine, so only people over the age of 18 can get the shot. The vaccine clinic is drop-in so no appointment was necessary.

"It's been exciting doing the pop-up clinic today," Liberty Lake Family Medicine supervisor Kiara Sicklin said. "We've been able to catch a couple people who weren't planning on getting vaccinated today who have now done it."

Everyone who got vaccinated received Hoopfest merchandise, a Kona Ice snow cone and a free skate pass for the skate ribbon.

There is still more to come. Two art projects are set to be installed early this fall, the North suspension bridge will be renovated in 2022, and they are looking into returning the Lilac Butterfly after it fell down in the January windstorm.

It's been quite a journey. But he said they will not be slowing down. This June, the city will be sending out a public survey to renovate neighborhood parks.

ICYMI live on @KREM2 earlier, I spent the day at the grand opening of the Ice Age Floods Playground in Riverfront Park.

This recreational area is just one piece of the $75 million-dollar revitalization project. Check out the park in our newscast at 6 p.m. pic.twitter.com/IFVFg5n8xG