Ryland Brown, an airman serving in Spokane, said his friend gave his dog away after he left for basic training. But Brown never gave up hope of finding him again.
Author: Megan Carroll
Published: 7:46 AM PST February 13, 2020
Updated: 8:25 AM PST February 15, 2020

SPOKANE, Wash. — A dog rescued from one of the worst hoarding situations that the Houston Society for Prevention of Cruelty to Animals (SPCA) has ever seen was reunited with his owner.

Ryland Brown is a U.S. Air Force airman who is serving in Spokane. He said he left his 6-month-old Great Pyrenees with a friend in Houston in 2017 before he went to basic training in San Antonio.

Wrangler is microchipped and registered to Brown.

Brown had given up hope of finding Wrangler — until he was rescued from a hoarding situation in January. Nearly 200 animals were removed from the home in Spring, Texas, including chickens, roosters, rabbits, exotic birds, potbellied pigs, duck, geese, cats and dogs.

Wrangler, who is now three years old, was found in a wire crate in the backyard. The SPCA says he was separated from Brown for nearly three years.

“I was just driving and a text message popped up on my phone and it said, 'Your pet Wrangler Brown has been found by Jay,'” Brown told KREM's Houston sister station, KHOU.

RELATED: Texas airman hadn't seen his dog in nearly 3 years, then it was found at an animal hoarder's house in Montgomery County

The animal group Many Paws transported Wrangler across the country to reunite with Brown on Friday. His flight arrived at the Spokane International Airport at 1:15 p.m.

"He's so big! He's so tall! He is the best valentine. He is still very much the Wrangler I had. He's super sweet and still does that crazy playful jump," Brown said when he saw Wrangler. 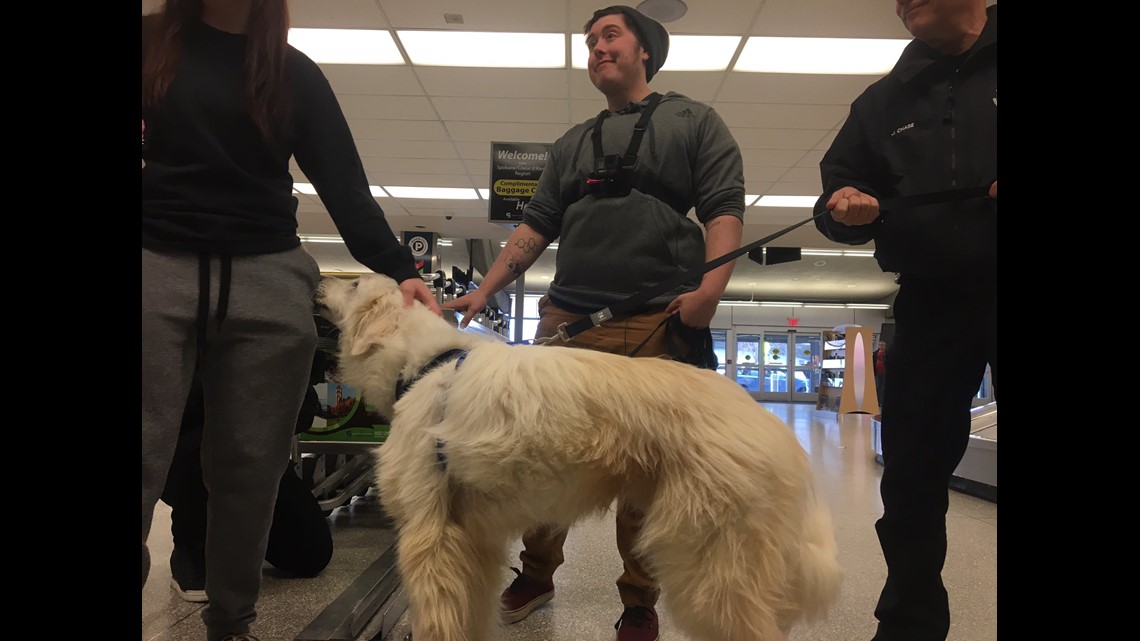