It has been almost 40 years since snow has fallen in the Spokane area on this date. 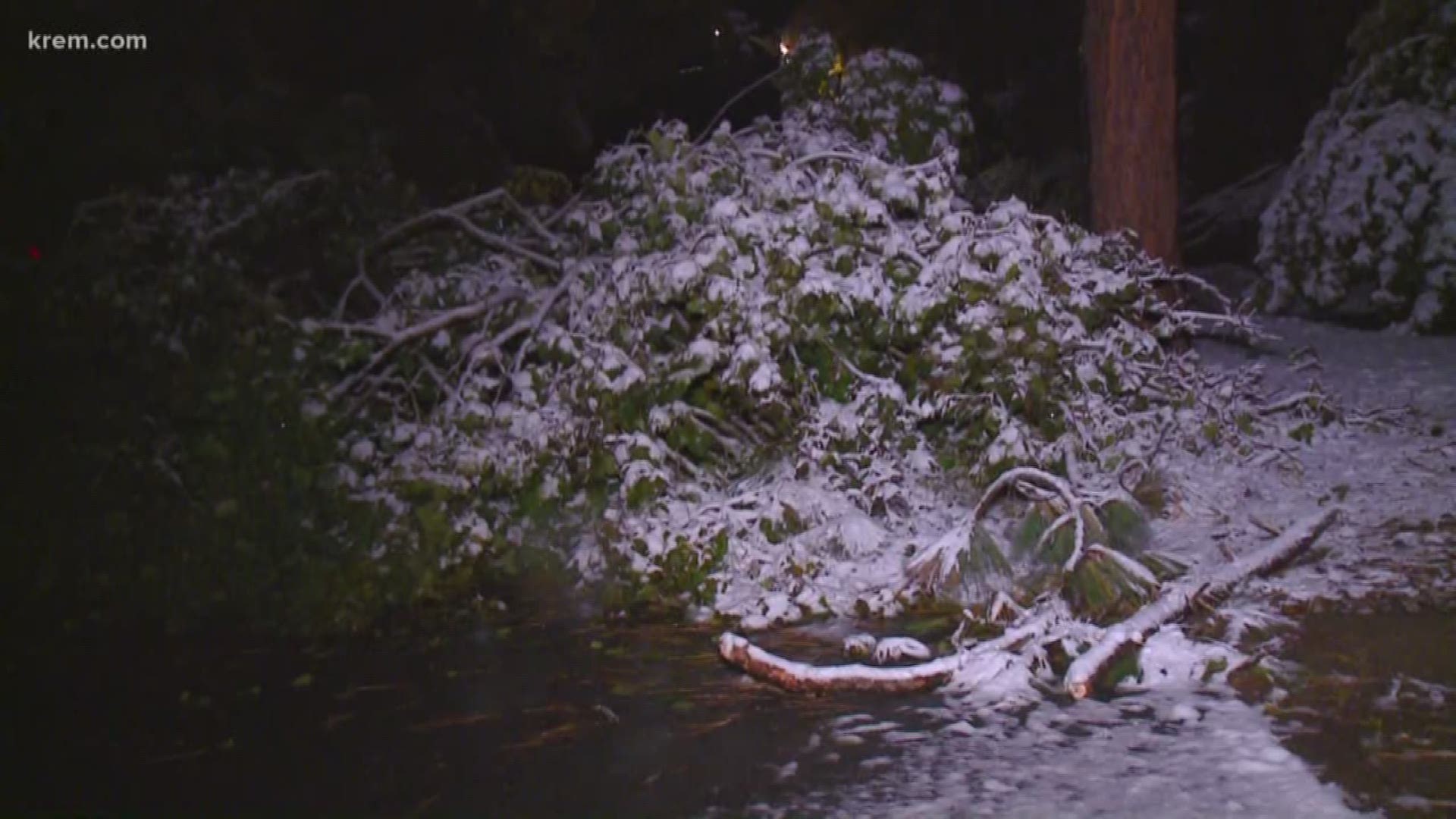 SPOKANE, Wash. — A record-breaking amount of snow blanketed the Spokane area on Tuesday night into Wednesday.

The National Weather Service said four inches of snow fell at the Spokane International Airport by Wednesday morning. The previous daily maximum snowfall record was a trace on Oct. 8, 1981.

Snow began falling in the region at about 10 p.m. on Tuesday. As temperatures dropped, a batch of precipitation turned into snow between Spokane, Deer Park, Coeur d'Alene, Athol, and Sandpoint.

Much of the snow tapered off early Wednesday morning but some areas of North Idaho, including Coeur d'Alene, still saw snow through late morning.

Spokane is not under any watches or warnings on Wednesday.

Temperatures will remain chilly for the rest of the week, with highs in the 40s on Wednesday and Thursday. Lows could reach the low 20s or upper teens on Thursday morning depending on the location.

Spokane police said the wet, heavy snow caused tree branches to break off and fall into the roads. Some have also fallen on power lines as more than 30,000 people were without power in Spokane County and North Idaho on Wednesday morning.

RELATED: More than 30,000 Inland NW residents without power after snowstorm

Crews were working to clear the roads and restore power, police said.

Police said traffic signals at many intersections were not working and reminded drivers that they should treat these intersections as four-way stops.

Roads were also covered with ice and slush, making for slick conditions.

Spokane Public Schools announced on Wednesday morning that school was closed for the day due to the heavy snowfall and widespread power outages.

All other school activities, programs and facility usage scheduled for Wednesday were also canceled. A make-up date will be communicated later, according to the school district.

More than a dozen other school districts announced closures or delays on Wednesday morning.

Track the latest school closures and delays on KREM.com

Spokane fire crews have received 120 calls about damage since midnight on Wednesday, with many of them concentrated in the South Hill, Chief Brian Schaeffer said.

Schaeffer said some residents reported that trees that fell on their homes.

Fire stations called in off-duty and extra crews and are working with Spokane County Public Works to clear the streets. Some fire stations were without power.

Send your snow and weather photos to pics@krem.com or share them on social media using #KREMWeather

RELATED: Chance of snow Tuesday night in Spokane; up to 6 inches in N. Idaho mountains

RELATED: The PNW is going to be a 'different place': Mount Hood resorts grappling with climate change