A Washington State Patrol trooper asked drivers to be safe while driving as high winds blow dust across roadways and decrease visibility. 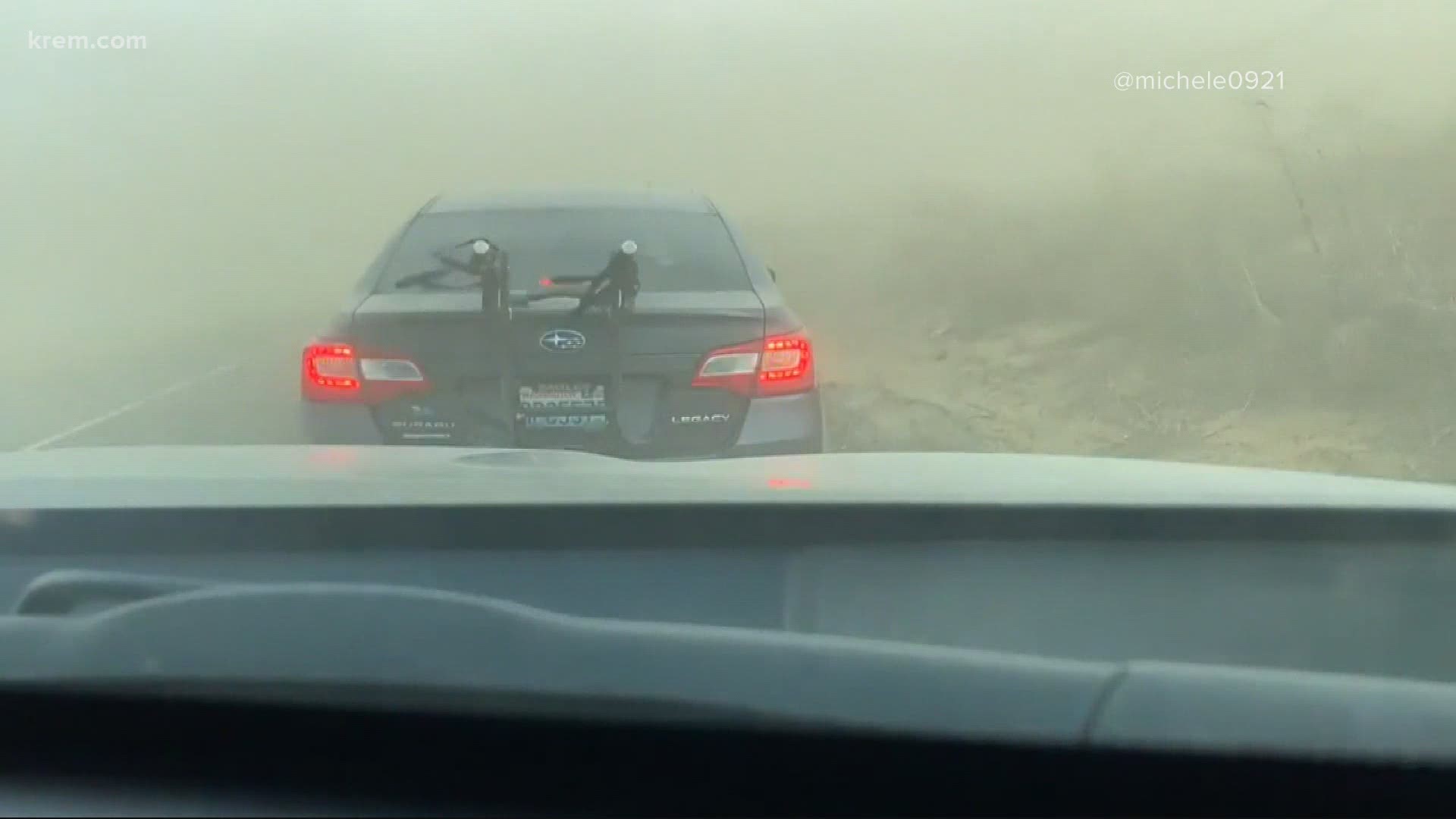 MOSES LAKE, Wash. — A windstorm Sunday afternoon led to blowing dust throughout Eastern and Central Washington is snarling traffic in the region.

Washington State Patrol troopers responded to a seven-car collision in Richland on I-182 amid high winds and lowered visibility. Trooper C. Thorson tweeted photos of the scene on Sunday evening, saying that it was a "minor injury collision" and asked people to be careful due to the winds and blowing dust.

I-90 reopened from milepost 182 east of Moses lake to milepost 221 in Ritzville. WSDOT announced the closure on Twitter at 2:45 p.m. and said that crews are monitoring the area. The National Weather Service also issued a Dust Storm Warning for the Ritzville area, including US-395 and I-90, until 3:45 p.m. Sunday.

Traffic alert in Richland: WSP is investigating a seven car, minor injury collision on I-182 , just west of Queensgate Blvd.... westbound. Left lane has been opened up. Please be careful due to high winds and blowing dust!!! @WSDOT_East pic.twitter.com/lvihErpQSf

The Keller Ferry on State Route 21 that crosses the Columbia River has also reopened after being closed due to high winds, according to WSDOT.

WSDOT also tweeted photos of poor conditions on I-90 west of Ritzville.

A Public Safety Alert was sent to mobile phones in the area saying that Spokane County Emergency Management was issuing a warning due to the National Weather Service stating "this storm has the potential to be a high impact event with winds 50-65 mph and gusts to 70 mph between 2 and 8 p.m." They also advised people to stay indoors if possible.

We appreciate everyone's patience during the closure. Please travel safely.

Trooper John Bryant tweeted photos of a few of the scenes. There was a total of 36 collisions, including one involving eight vehicles, in the area, Bryant said. He added that there were a few minor injuries.

A total of 36 collisions yesterday in our area. Majority in Kittitas Co (Snow/Slush) near Snoqualmie Pass AND Grant Co/Othello area. A few minor injuries overall. The biggest one was 8 vehicles on SR 26 JE of Othello due to the dust storm. pic.twitter.com/BduvhR9QBc