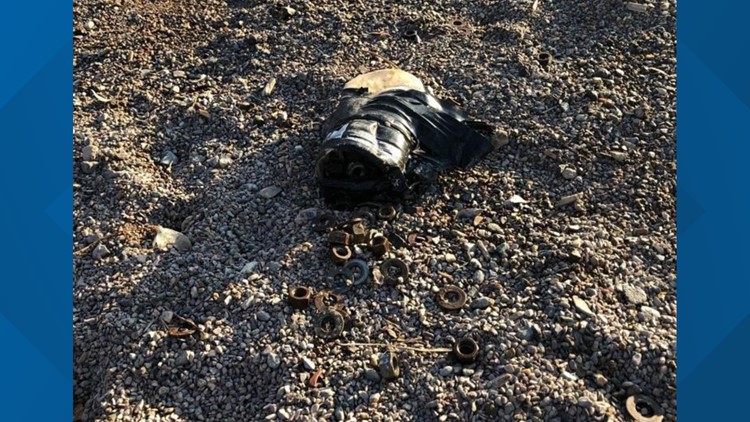 Authorities evacuated an elementary school in Montana's capital city on Tuesday after officials found what they thought was the remnants of a homemade bomb, but it turned out to be a plastic bottle filled with nuts and bolts left in the schoolyard.

School officials made the discovery shortly before classes began at Rossiter Elementary School. They blocked off the area and called police at about 8:20 a.m., said Lewis and Clark County Sheriff Leo Dutton.

An investigation found the plastic bottle wrapped in black electrical tape was full of washers, nuts and bolts, along with a non-flammable unidentified liquid, Dutton said. There was no detonator attached to the bottle.

A homeless person found the bottle near a construction site and left it in the playground, he said. No threat had been made against the school, and there were no injuries or property damage.

According to MTN News, Dutton apologized for calling the item an "IED."

Dutton also originally said the device detonated, but that also turned out to be incorrect.

“We saw video and still pictures that apparently earlier in the morning that bottle was upright such as described earlier, that a young man tried to kick a field goal with it," Dutton told MTN News.

When the boy kicked the bottle its contents "sprayed" out leading officers to believe it had "detonated,” MTN News reported.

"I had no choice, knowing what I knew then versus what we know now totally different decisions, only thing I would change is how I said it," Dutton told MTN News. “It’s my fault and my issue. My issue to correct. From this point on I will be withholding information until I can verify fully.”

The 490 students walked to a nearby location where they could be picked up by their parents, said Superintendent Tyler Ream. School buses were brought in to keep them warm. Parents were notified via the school's messenger system.

Police closed the school and searched the grounds for additional devices, and thousands of students across Helena and East Helena were kept inside while authorities swept for bombs outside, authorities said.

Searches also were conducted at the state Capitol and government buildings, Dutton said.

Helena is a small city of about 30,000 people in the foothills of the Rocky Mountains. The school is in a neighborhood just north of the city's center.

RELATED: City of Spokane employee talks about being injured by 'booby trap' at illegal camp