Five additional Spokane police officers, a detective and a sergeant are joining 16 personnel already assigned to the downtown core. 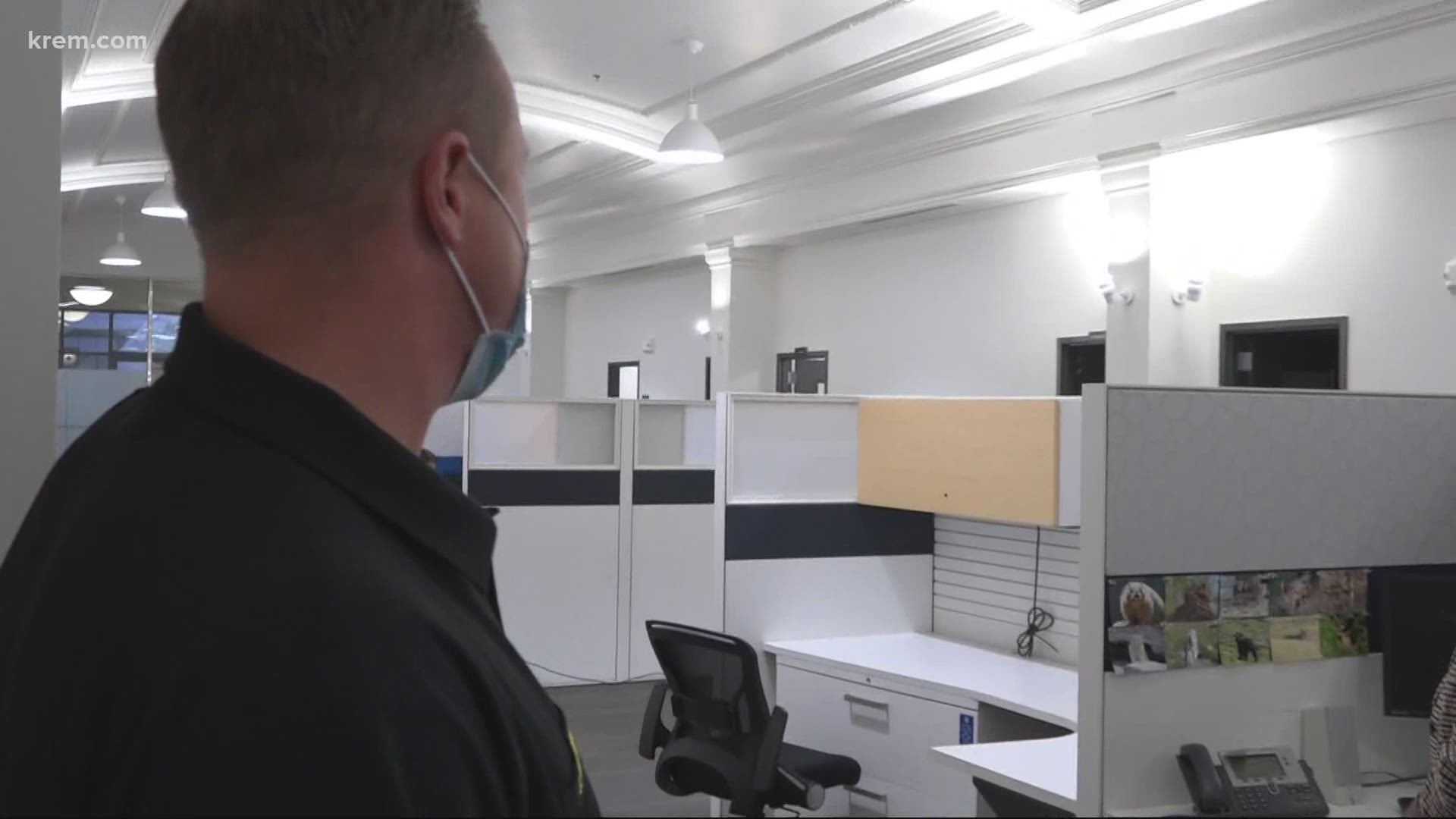 The 6,800-square-foot precinct is located at Riverside Avenue and Wall Street in the former Umpqua Bank building. The building is right next to the Spokane Transit Authority bus plaza and the Spokane Library.

At her first State of the City address in February 2020, Mayor Nadine Woodward said one of her top priorities was public safety, which includes better relationships with law enforcement downtown.

“We are delivering on our commitment to move our downtown precinct back into the core of our city,” Woodward said during the address.

"Really for us, one of the big issues for law enforcement is always going to be crime...but another piece that some would argue is equally important is that perception of crime," Meidl said. "So you could actually be in a really safe area but if people don't feel safe then we need to do things to help them increase their feelings of safety."

"So with this area down here as well we'll have bike patrols, we'll have foot patrols, and I think that's going to not only help get crime down. Crime is down in the double digits downtown, but I think it's also going to give folks that feeling of safety," he continued.

The new police precinct replaces a much smaller downtown police location at the Spokane Intermodal Center that had about half the officers.

"Crime is dropping and a new precinct will enhance this progress," Woodward said earlier this summer.

Five additional officers with the Spokane Police Department, a detective and a sergeant are joining 16 personnel already assigned to the downtown core, Woodward said. Two Spokane County Sheriff's Office deputies will also use the precinct.

"The community input was to be here, and so we set the wheels in motion and that was scoping out locations where the officers wanted to be," Woodward said. "The community was very clear when I was running for office that they wanted officers downtown on foot, on bicycles, and a visible presence and so did our businesses and so that's why we're here today."

Thirty-five total SPD officers and staff members will use the "highly visible and strategic facility," Meidl said. He said the location offers greater visibility for the department and more opportunities to engage with the community.

"I am convinced businesses, visitors, and shoppers will see a noticeable impact on quality of life downtown with this relocation and increased staffing,” Meidl said.

“This is a smart move to get us closer to a true community policing model,” said Councilmember Lori Kinnear, who chairs the Public Safety Committee. “This larger space will accommodate much-needed behavior health specialists and give the downtown precinct the visibility that residents and workers have asked for.”

"This marks the establishment of an innovative community policing hub Downtown that will serve all people," Beggs said.

The city will lease the space, which is expected to cost $295,000 apart from funds allocated by developers, for 10 years.

The police precinct will not occupy the entire Umpqua Bank building, as the 106,820-square-foot property includes room for retail and office space, Woodward said. Confluent Development is currently redeveloping the building.

InterUrban Development said in 2019 that the ground floor of the Umqua Bank building would be turned into a food hall with about 14 different places to eat. Construction was still underway as of April 2019 and developers declined to comment on the project's status.

RELATED: Spokane Central Market could include 14 places to eat