Andrew Hall's sword survived the tests on the popular TV show and he won the title of "Forged in Fire Champion," along with a $10,000 cash prize. 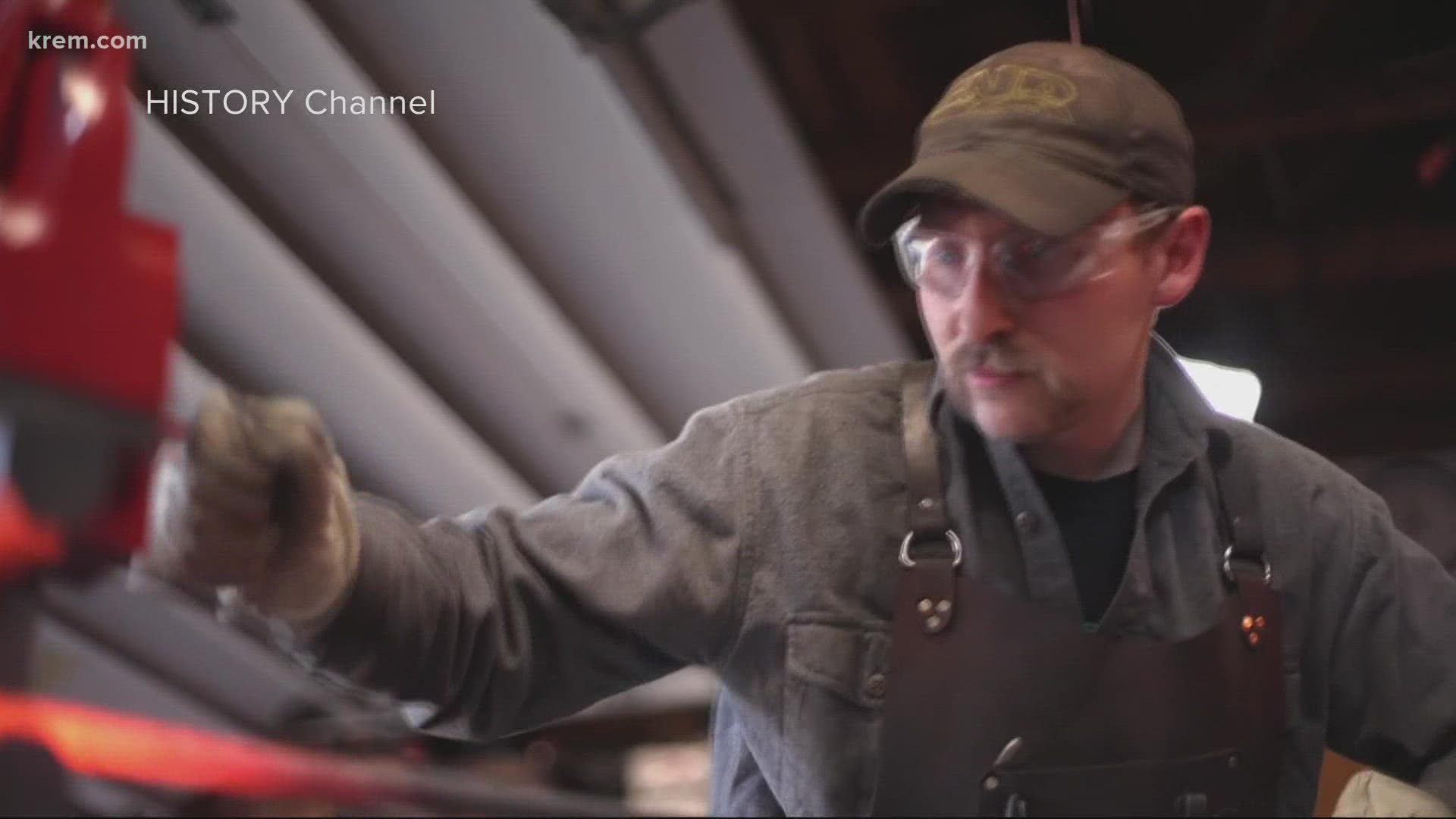 In Andrew Hall's Coeur d'Alene garage, he's been forging metal for the last five years. It's a hobby that's turned into a passion.

"It's not hard to believe, right? I like the adrenaline, I like the fast-paced nature, I like it for all the reasons why I like fighting fire, but it's critical thinking in-the-moment to solve a problem," Hall said.

Hall is a Spokane firefighter but he's not talking about his day job. The bladesmith is more than an amateur — he's a champion. In July, Hall won the show, "Forged in Fire" on the History Channel.

A Coeur d’Alene man won the show #ForgedInFire on the @HISTORY Channel. Andrew Hall joins us on #UpWithKREM to show us what it takes to be a bladesmith champion. @KREM2 pic.twitter.com/jhXgolrXUJ

Watching him work on a piece may look as simple as hammering hot metal, but Hall meticulously crafts his creations with each swing.

"I'm thinking about where the metal is going to go and how I hit, and with what type of hammer changes how things are going to spread out," he explained.

In a time when it seems like many seek instant gratification, Hall thinks about creating something that takes time and lasts forever.

"Having something you can have and keep forever, that's what appeals to me. I call that a legacy tool or legacy item," Hall said.

Hall's passion for bladesmithing began in the Scouts and his high school metal shop class that he took five times.

"I don't know how I got away with that, but they let me keep doing it, so I did it," Hall said.

His dedication to his hobby led him to "Forged in Fire." The show put out a casting call, reviewed his work and audition tape, and then he was contacted by show producers. On the show, four metal workers go head-to-head to make a historical weapon from scratch.

"It's exactly like it is on TV. You walk in, you introduce yourself, they tell you what the challenge is and it's go time," he explained.

The show throws all sorts of challenges at the bladesmiths and puts their swords to the test. On Hall's episode, the contestants were tasked with creating a 32-inch Walloon sword, which is a 16th-century European weapon known for its quick slashes and stabs in combat.

"Can they cut up a pig, bash into a flaming door of all things? Like who tries to chop down a door with a sword?" Hall explained.

Hall's sword survived the tests and he won the title of "Forged in Fire Champion," along with a $10,000 cash prize.

"I poured my heart and soul into that sword, and for that to win me the title of 'Forged in Fire Champion,' that is a dream come true," Hall said on the show.

"It's just a validation of all the time that I spend in this three quarters of my garage by myself sometimes and I also hope it's a validation for my family too, that the time I'm not with them or the late-nights or early-mornings isn't just time wasted," Hall added.

Andrew Hall shows us his process of forging a knife. So awesome! pic.twitter.com/WKBtNnhv79

While winning the show is a huge accomplishment, Hall doesn't do this for the applause. He wants to show others his hobby. He said, it's about taking pride in your work and the work that goes into not just knives but everything we use every day - a legacy he hopes to pass on to his daughter.

"In the world of 'two-day shipping,' and instant gratification, there is a call for doing something with your hands and doing it the hard way," Hall said.

What's next for Hall? He said he wants to expand his shop, teach others about bladesmithing and will consider the possibility of returning to the show for a championship episode if given the opportunity.