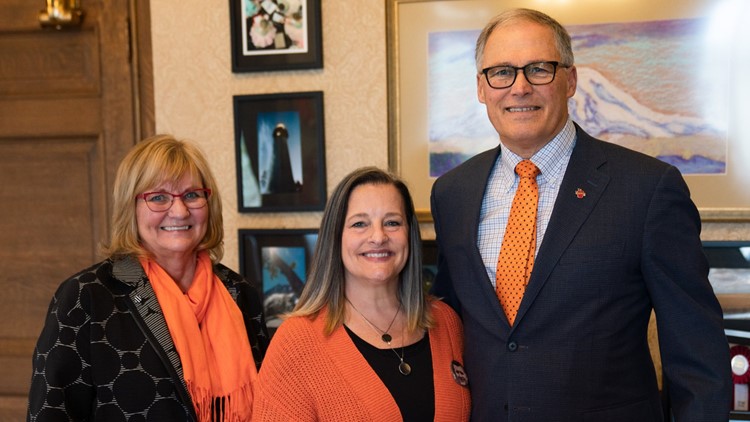 Testimony on Monday focused on bills that would increase the punishment for gun theft or illegal firearm use, as well as those placing further restrictions on firearms.

“Had [the shooter’s] high-capacity magazine rifle not jammed, just imagine the carnage that would have happened at the school that day,” Strahan said in January 2019.

Inslee posted on Facebook about meeting Ami Strahan in Olympia on Monday.

"Ami's son, Sam, confronted a classmate with a gun who shot and killed Sam in 2017. Sam's act of courage may have saved others from the same fate. Now, Ami is summoning that courage to do the same," Inslee wrote.

Governor Jay Inslee
Yesterday, I met Ami Strahan. Ami's son, Sam, confronted a classmat... e with a gun who shot and killed Sam in 2017. Sam's act of courage may have saved others from the same fate. Now, Ami is summoning that courage to do the same.

"There are common-sense steps we can take - this legislative session - to do that. And I think we owe it to Sam and to Ami to make that happen," he added.

Much like the setting on the national stage, groups in Olympia were divided on the issue.

One of the most prominent voices against passing these types of laws was Washington Representative Matt Shea (R-Spokane Valley).

“If we do not take action, additional mass shootings will occur here, that is inevitable,” Ferguson previously said.

Democrats are leading the charge for what they call “common sense” gun laws. Those Democrats have the majority in Olympia, but the question remains as to whether they will get the votes.

On Tuesday, the high capacity magazine and assault weapon ban was heard in the House's Civil Rights and Judiciary Committee. It's possible that at least one of the bills could be voted on in Committee as early as this week.