Although witnesses agree on many details about the fight at Ferris High School in January, some said school resource officer Shawn Audie acted appropriately while others questioned his use of force. 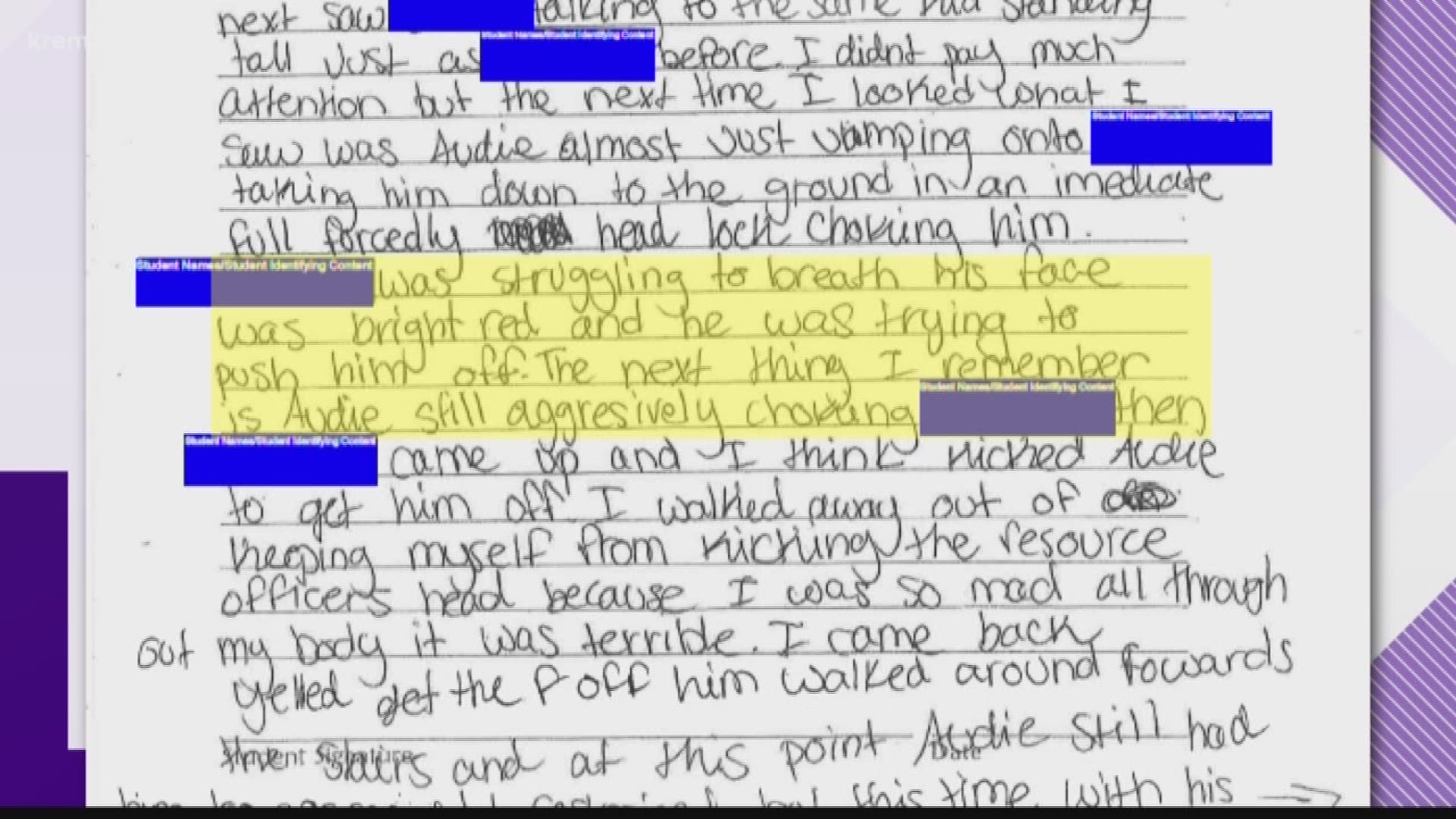 SPOKANE, Wash. — Statements from Ferris High School students and staff provide insight into what happened during a fight in January that ended in the resignation of the school’s resource officer.

KREM received an 81-page document on Thursday from Spokane Public Schools through a public records request.

The document contains statements from students and staff who witnessed school resource officer Shawn Audie step into a fight between several students. Although witnesses agree on many details about the fight, some said Audie acted appropriately while others questioned his use of force.

In addition, some teachers questioned whether the district should have a protocol for breaking up larger fights between students.

The students' names were redacted from the school documents. KREM is also not naming teachers or administrators who were were involved.

According to several statements, the fight began as an argument between three students over a pair of Air Jordan sneakers. The student accused of stealing the shoes told a staff member that two students were going to "jump" him at lunch.

The student then went to a teacher and asked for help because he was on probation and couldn’t get into a fight. The teacher told him to stand in a certain spot at lunch and he would make sure nothing happened, documents said.

At lunch, the teacher was present when the two students confronted the other student who they believed stole the shoes, according to statements. A staff member tried to break up the argument and asked them to go to his office with him, witnesses said.

According to witness statements, one of the instigators of the fight got in the teacher’s face and pushed him.

Audie approached the incident and grabbed the student who pushed the teacher, witnesses said. The other student got in the teacher’s face. According to witnesses, when Audie went to grab that student, the other punched him in the face.

Audie took the student that punched him down to the ground, pinned him and attempted to handcuff him while the student was still trying to hit him, according to documents.

Then, another student who was previously uninvolved in the situation jumped on Audie and, according to some witnesses, started punching him. The school custodian then pulled that student off Audie, according to documents.

Yet another student tried to get to Audie, which Audie claimed in his report prevented him from handcuffing the student he had pinned down. Documents said Audie tried to punch this student but missed. The situation eventually died down and the student he has pinned down was arrested.

Although most of the timeline is agreed upon by those who provided statements, there are disagreements on some details.

Witnesses also disagreed about whether Audie's use of force on the pinned-down student was appropriate or excessive.

One staffer's witness statement said, "Shaun was doing all he could to get the boy he had on the ground to calm down with very little luck. The boy continued to make every effort to fight the situation and was not calming down."

In another witness statement, a student says Audie has the other student pinned down with his knee in the student’s throat where “his face was turning purple.”

Another student said Audie first put the student in a headlock before restraining him with his knees. The student said the student Audie had restrained was “struggling to breath his face was bright red and he was trying to push him off.”

In another statement, a student said, “Students were gathered around the incident yelling, ‘He’s innocent.’ They locked shocked and quite honestly horrified at what they were seeing.”

One administrator said students were filming the incident and calling it racially motivated. This administrator made sure the school was locked down.

A teacher’s statement detailed how scared they were during the incident.

“Where is our help? Where is administration? Where are some male teachers, because I don’t think I can stop a student who attacks the officer, but I will not leave his side. Why are we not clearing the cafeteria, why are we not going to lock-down, I hope there is not a weapon pulled, because I might freak out,” the teacher wrote.

While this teacher was trying to stop the incident, they slipped and fell on the floor, injuring themselves.

In an incident report written by Audie, he said he had multiple contacts with two of the students previously. He said he had to remove them from the Spokane Arena for being disruptive during a school sports event. Audie said the night ended with a ‘physical altercation’ on Jan. 22.

Audie said one student ‘continued his defiant behavior’ during school hours on Jan. 23 and Jan. 24, when the fight occurred.

“ ***** and ****** have been attempting to provoke me during school hours mostly by petty harassment. Example... by walking past my office without passes and staring at me as they walked. They will do this in the hallways and especially during lunches,” Audie wrote.

Before Audie's hiring with Spokane Public Schools, court documents indicate that he was involved in at least two cases with the Spokane County Sheriff’s Office where he was accused of use of excessive force and another case where a man died from his injuries.

Audie and another Spokane County deputy were involved in a wrongful death lawsuit in connection to the death of a man in June 2013.

After reviewing the fight, Brian Coddington, a spokesperson with Spokane Public Schools said "no violation was found." After information about his background was brought up, Audie was placed on leave. He later resigned from his position.