A KREM investigation found multiple vaping shops in Spokane are selling unflavored vaping juice and flavoring that can be mixed together. 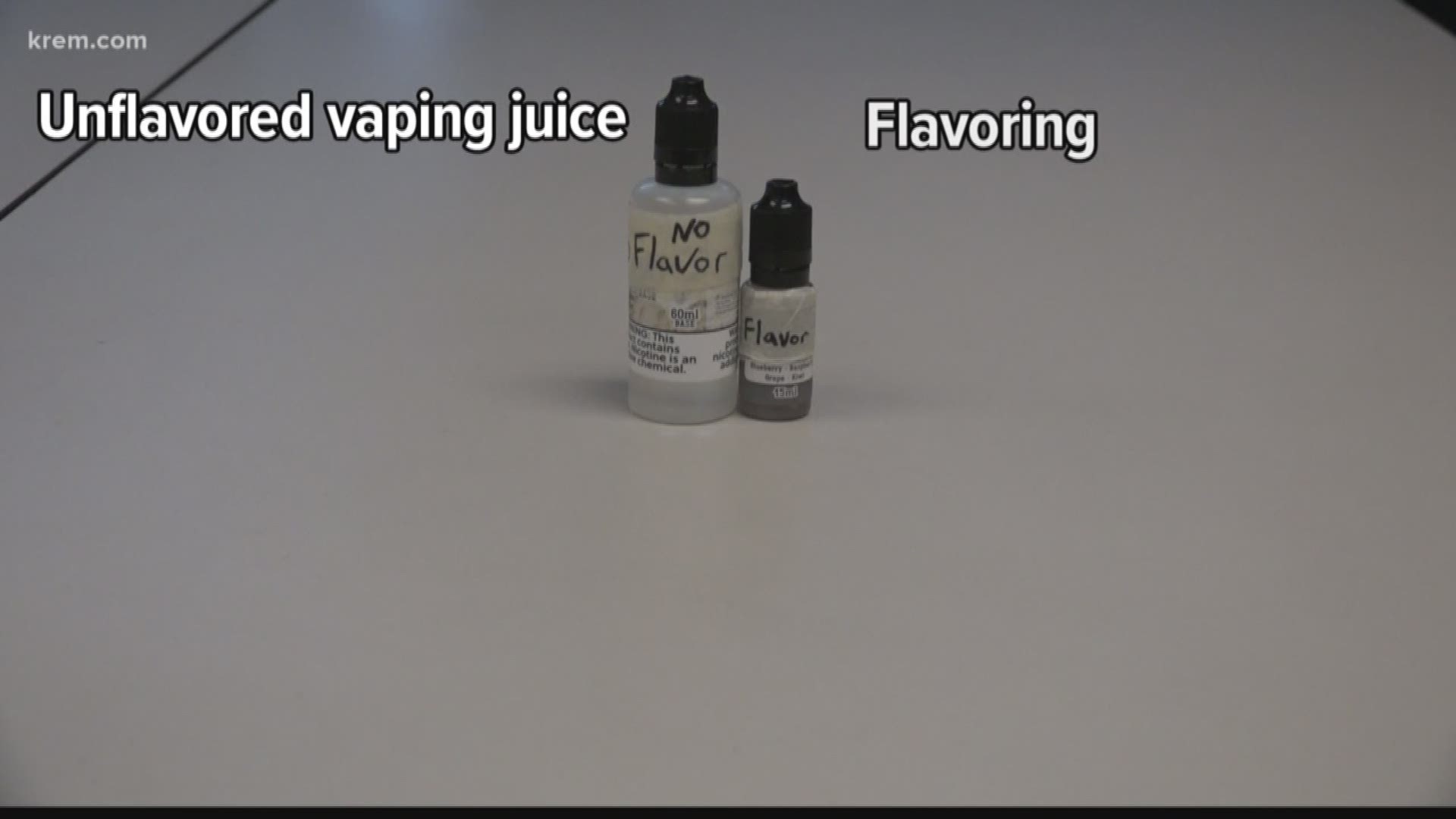 SPOKANE, Wash. — Selling flavored vaping products is currently illegal in Washington, but some stores are still selling two separate products that can be mixed to make flavored vaping juice.

The state’s Liquor Cannabis Board said these shops are still breaking the law.

KREM was able to purchase these products, along with a tank to mix the juices together for a vaping rig, from a shop in Spokane. Other Spokane-area stores confirmed to KREM they also sell the products separately.

KREM is not naming the individual vaping stores interviewed for this story.

But the state’s Liquor Cannabis Board said this practice is still a violation of the new Washington Administrative Code, which was enacted on Oct. 10 and lasts through Feb. 7, 2020.

“If we are at a premises and we locate some flavorings that we can [ascertain] and or that we are told can be utilized to add to or the intent is to add to the vapor product, that would be considered something that would be banned,” said Susan Anderson, a lieutenant with the LCB’s Vapor Enforcement Unit.

Credit: KREM
Unflavored vape juice and flavor extract, along with a tank for a vaping device.

Anderson and Lisa Reinke, a captain in the LCB’s Vapor Enforcement Unit, said staff have been visiting each of the over 4,000 vape stores in the state to educate retailers on the ban and explain what stores can do with their product while the ban is in effect.

Reinke said stores won’t get in trouble if they still have products that violate the ban the first time an LCB officer visits them, as the agency wants to educate license holders and give them a chance to comply.

RELATED: Could Spokane students get fined for vaping?

If a store were to keep selling banned products after that first visit, then the LCB has the authority to suspend the store’s license for 180 days, Anderson and Reinke said. But the LCB wants to avoid taking these actions against stores if possible.

“We will be doing follow-ups with those that may have already had or still have flavored vaping products on their shelves,” Anderson said. “We’ll take enforcement action at that time. It has been approved that we can go forward with orders of suspension. We’re hoping we don’t have to do that.”

So far, Anderson and Reinke said compliance has been good across the state, with no suspensions being handed out as of Oct. 24, but some stores have waited until the LCB visits them to pull the products off their shelves.

The LCB doesn’t want stores to destroy or throw out their inventory of flavored vaping products, as the current ban is set to expire on Feb. 7, 2020. At that point, the Board of Health may decide to extend the ban or lift it after it expires, based on a CDC investigation into vaping-related illnesses and deaths.

Instead, the LCB is asking that stores take flavored-vaping products off their shelves and sales floor and place them away from customers and employees to ensure they aren’t sold to the public.

“We’re asking that they box it up and put it in a back room where it’s not accessible to employees,” Reinke said. “This is a temporary 120-day ban that could end February 7 of 2020. Its temporary right now, so we don’t want to encourage the licensee to destroy it.”

Reinke added that the LCB is working with the Washington Department of Ecology to offer guidance to stores that decide to destroy their stock of flavored-vaping products so they can do so in a safe way.

As for consumers, there’s no rule penalizing the public if they are able to purchase these products from a vaping shop, or if they buy flavoring from another source to add to their unflavored vaping juice.

“If an individual went in and purchased this product, we are not going out in the parking lot, contacting them and saying, ‘You’re in violation,’” Reinke said. “We are in line with the state board of health in asking the public not to consume any flavored products until the CDC investigation has concluded.”

Have a tip for KREM investigators? Email investigations@krem.com.