The federal government is allocating 1 million doses of the Moderna vaccine to the program. Idaho could get as many as 5,000 doses by next Thursday. 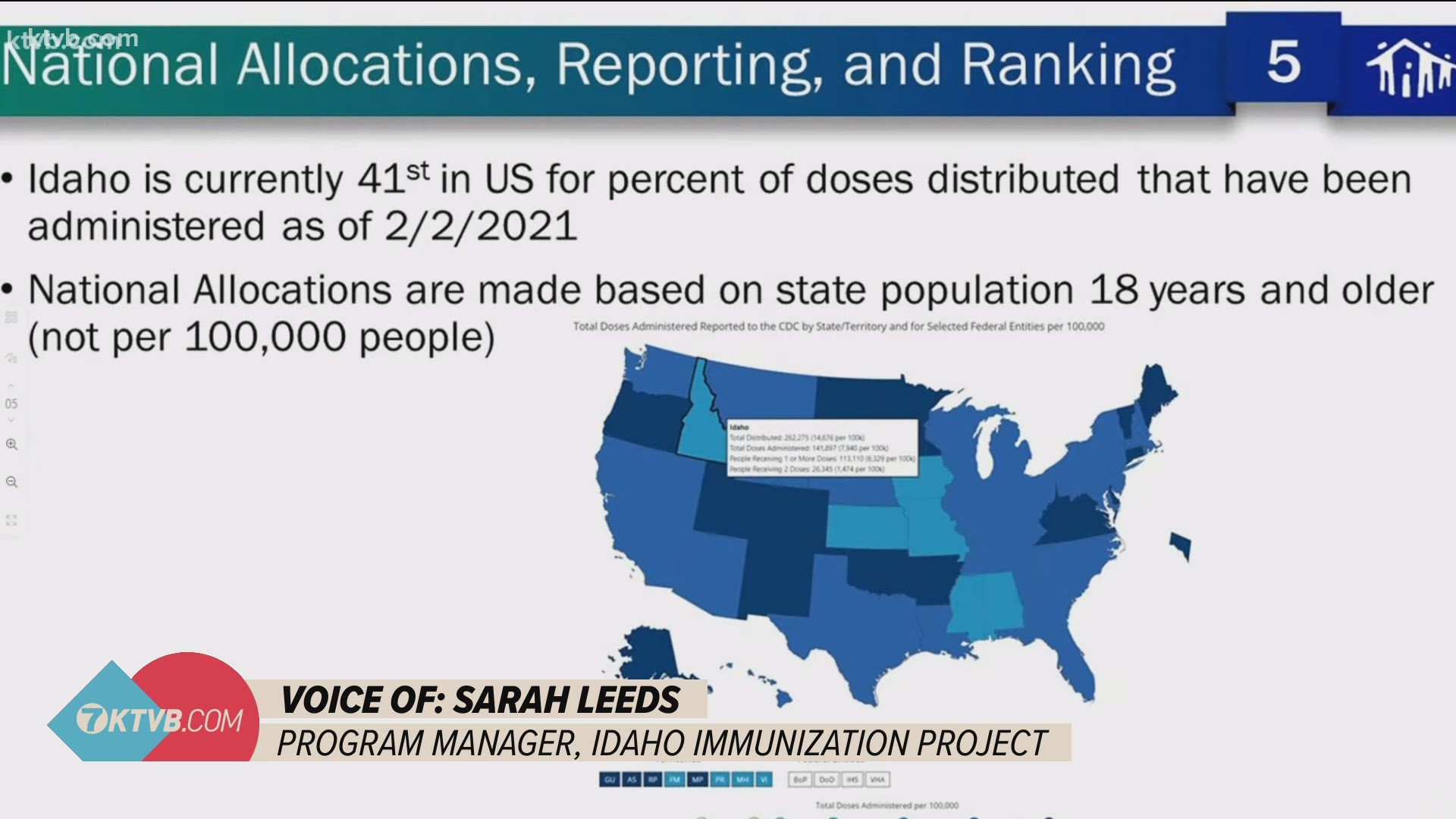 BOISE, Idaho — It’s been nearly two months since Idaho health care providers began administering COVID-19 vaccines in the Gem State. The rollout has gone much slower than expected with Idaho ranking among states with the lowest number of people who have received at least one dose of the vaccine.

The Idaho Department of Health and Welfare estimates that there are around 100,000 unused vaccines in Idaho, while thousands of Idahoans are waiting to get a shot in the arm.

Gov. Brad Little issued a new executive order last Thursday aimed at making the vaccine rollout more transparent and hopefully quicker without wasting doses. It requires vaccine providers to use their doses within 7 days of receiving them. He also ordered better data tracking starting this week.

The Idaho COVID-19 Vaccine Advisory Committee created by Gov. Little met again on Friday, Feb. 5 to discuss how the rollout is going across the state.

It's been two weeks since the committee met and a lot has been happening in that time. Public Health Administrator Elke-Shaw Tulloch said there has been an important addition to the state's coronavirus website. Right at the top there is place people can go to find out when and where to get your vaccination in Idaho.

"So it's a new page that we have established, public facing page so people can go and essentially see what population group is being served right now, what population groups are continued to be served, how they can contact or make connections locally throughout the state," said Shaw-Tulloch.

She said you will also find additional information on the website about what to expect when you go to your appointments and information about the vaccines.

On Thursday, Johnson and Johnson submitted an application to the FDA for emergency use authorization of their COVID-19 vaccine. State epidemiologist Dr. Christine Hahn called that exciting and unexpected news.

"The first week of March we will hopefully have an approved and recommended vaccine," Hahn said.

So far, 120,587 Idaho residents have at least one dose of the two-shot vaccine. And 29,012 have received both doses. There has been a total of 149,599 doses administered, according to the state’s coronavirus website.

Sarah Leeds is the immunization program manager for the Idaho Department of Health and Welfare and a member of the vaccine advisory committee. She gave an update on where Idaho ranks in getting the vaccine out to those who want it.

"As of Tuesday, Idaho was 41st in the nation for doses administered of the doses that were distributed, so, of course, we have lots of room for improvement, but we are not last," Leeds said.

She added that because Idaho has a higher than average population that is 18 or younger, the numbers show Idaho is lagging when it comes to vaccinations. On Thursday, Leeds says she took part in a White House briefing that included about 40 immunization program managers across the country, and that was a great opportunity to voice concerns about the number of vaccines being administered in Idaho. She that could change when the committee meets again in two weeks and we see a different number that more accurately reflects how Idaho is administering the vaccine.

Leeds says Idaho is seeing some allocation increases of the vaccine. We are now getting 25,400 doses per week, that's about a five percent increase from last week and around 17.5 percent higher than two weeks ago. She says the federal government has committed to that number of doses over the next couple of weeks.

Some other big news, Leeds says the retail pharmacy partnership has been activated by the federal government sooner than anticipated. Leeds says this will allow for an additional allocation of doses to come into the state. Across the U.S. there will be one million doses of the Moderna vaccine allocated to the program. Idaho has selected Albertsons and Walmart to distribute the doses. Leeds says Idaho is expecting to get between 3,000 and 5,000 doses by next Thursday, Feb. 11.

"So that's some really good news on the vaccine front, still not enough to vaccinate the populations we are currently working with, but it's still better than what we had a few weeks ago, so we're moving in the right direction," Leeds said.

The Idaho COVID-19 Vaccine Advisory Committee meets every two weeks to discuss priority groups in Idaho. The committee voted on a few recommendations for who should or should not be included in subgroups at its meeting Friday. Those recommendations will be forwarded to the governor for final approval.