What we know about a COVID-19 outbreak infecting EWU students

Two fraternities are in quarantine, according to an official at Eastern Washington University. Three students are currently isolating at Dryden Hall. 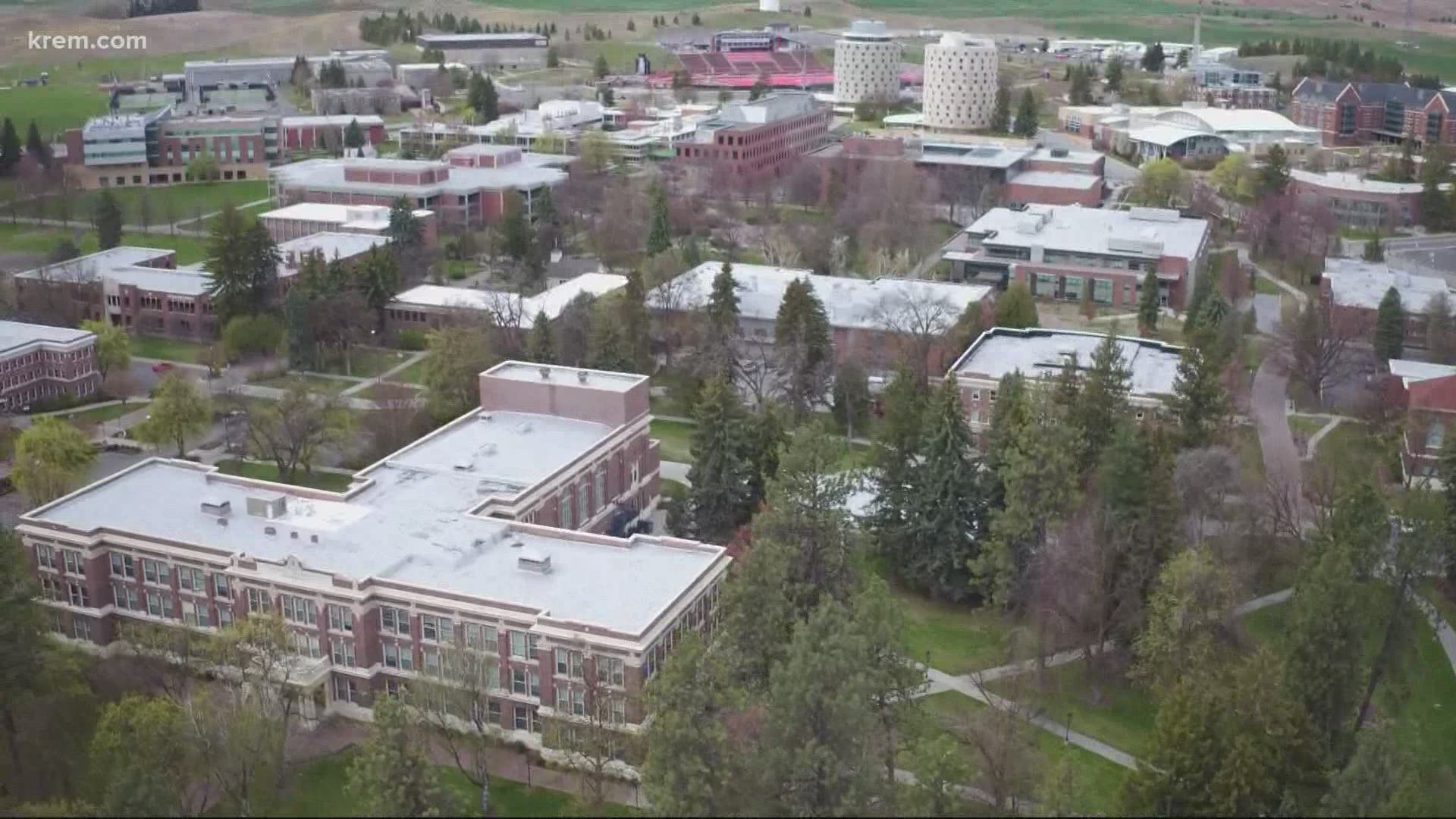 CHENEY, Wash. — A coronavirus outbreak has infected dozens of Eastern Washington University students, with a large number of cases reported in people who live in Cheney but have not been on campus.

Two EWU fraternities are in quarantine, according to Vice President of Student Affairs Robert Sauder. No citations have been given and three students are currently isolating at Dryden Hall, he said.

The university has created an online dashboard that displays information about positive COVID-19 cases among students and staff.

The university's dashboard also shows positive COVID-19 cases among students who live in university housing, and students who were on campus during their infectious period but do not live in campus housing.

Those numbers were significantly lower over the last two weeks, with 14 cases reported in students who were on campus but live elsewhere and five cases in students who live on-campus.

In total, 110 cases of COVID-19 have been reported in EWU students or staff since May 2020. Seventy-five of those cases, or nearly 70 percent, are in students living in Cheney who have not been on campus, according to the dashboard.

Most courses at the university are being offered online for the fall 2020 semester, but some are conducted through face-to-face instruction. EWU will continue with its 'Mac Flex' model for the winter quarter, which begins Jan. 4, 2021.

“This sensible approach will help ensure the health and safety of our entire campus community,” interim EWU President David May said in a press release. “At the same time, we must continue to look at ways to find a strong path forward and provide academic continuity during this uncertain period so students can continue their progress toward a degree.”

School leaders have addressed the risks and dangers of gathering in groups and the benefits of mask use. EWU is approaching the situation by using an “education-first” technique, Sauders said.

"I’m proud of how our students conforming themselves on campus able to do that in a safe manner," he said.

Sauders explained that many students have followed protocols and the majority of students are abiding by Governor Jay Inslee’s mandates set for the state of Washington.

Rachel Snider, a sophomore and criminology major at EWU, said she enjoys her time at the school and tries to maintain a social life despite coronavirus restrictions.

“I haven't been going to big parties, I've hung out with a couple friends. If you have symptoms, just don’t come over” Snider said.

On Sept. 26, Snider received a positive COVID-19 test result after feeling symptoms such as a headache and stuffy nose.

"I've had this stuffy nose for a couple days, might as well go get tested, lady actually told me I shouldn't get tested. But I'm going to be around family, so I got tested, two days later, I found out I was positive,” Snider said.

Snider's father, Steve, believes there is a lack of enforcement of rules and students like his daughter should not be taking in-person classes any time soon.

"It was just the groups of people that she was hanging with, friends group, spreading it amongst themselves. I love Eastern, what they're offering…I'm 100% behind Eastern, except when it comes to this stuff," Steve said.