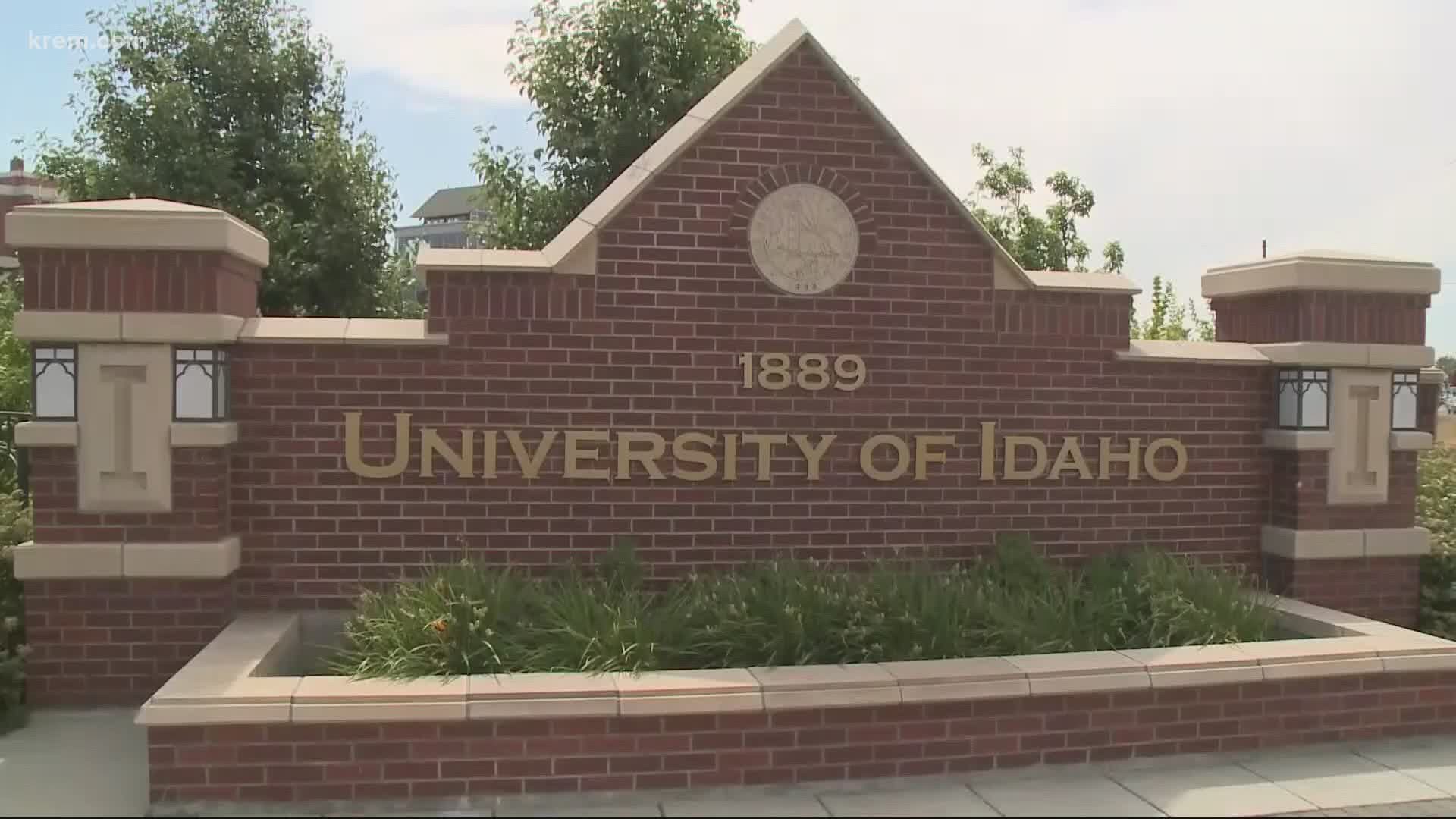 MOSCOW, Idaho — Eight fraternity and sorority chapters are in quarantine after COVID-19 testing at the University of Idaho's Moscow campus identified several "hot spots" on Greek Row, according to a memo from UI President Scott Green.

The coronavirus outbreak appears to be isolated to fraternities and sororities, but the university will increase its general surveillance testing outside of the Greek system this week to verify, Green wrote in the memo on Monday, Sept. 28.

The university's surveillance testing, which has focused on Greek Row over the past few weeks, noted increased viral load in wastewater, according to the memo. Some chapters have been told to quarantine by public health officials while others have implemented self-imposed quarantine out of an abundance of caution.

University of Idaho's infection rate for COVID-19 tests last week increased to 11.94 percent, with tests targeted to known hot spots on Greek Row. The number of active positive cases is about 1% of the Moscow campus community, including students and employees, according to the memo.

"I actually met with a couple of chapters early last week that self imposed quarantine when they started seeing an increase in students that were symptomatic," said U of I Dead of Students Blaine Eckles.

Eckles said its hard to say if the outbreak is from large gatherings.

"I mean obviously when you're working with young adults that want to come to campus and engage and socialize with one another," he said. "I'm sure that's where some of the spread has occurred. I mean, you could readily draw the point that we have a bunch of students living in a communal living experience in the chapter house and so that that's one reason why I'm sure there's somewhat of a spread."

Modelers and public health officials have told university leaders that testing primarily the Greek population is not indicative of the overall infection rate, which is likely much lower, Green said.

Green wrote that public health officials have not identified any classroom transmission through contact tracing.

Faculty who are concerned about the increased infection rate can teach online this week without additional approvals, though they may be required to move back to in-person instruction on Monday, Oct. 5, according to the memo.

If data collected through Friday, Oct. 2 drives the university to online instruction, public health officials recommend that this take place for two weeks.

The university will update students and staff with more data on Friday, Oct. 2.

In order to continue in-person instruction, the university will send a request for many of its students and employees to participate in COVID-19 testing. Those who are selected will receive an email with instructions from covid19questions@uidaho.edu.

RELATED: A tale of two campuses: How WSU and Univ. of Idaho are responding to COVID-19

Since the university started COVID-19 testing on Aug. 6, it has completed approximately 10,000 tests and the overall percent of positive results is sitting at 1.81 percent.

There are currently 72 people in isolation and the university has planned for 170 beds, according to the memo.

U of I is one of several universities in the Inland Northwest that have reported COVID-19 outbreaks in Greek settings.

Hawkins said she could also confirm that "fraternities are involved," but couldn't confirm which fraternities.

Whitman County also reported a marked increase in COVID-19 cases some as some Washington State University students returned to Pullman for the fall semester in late August.

The county has reported outbreaks in Greek housing and WSU dorms, according to health officials.