'This is now over': Spokane Public Schools stands ground against protesters without masks

The in-person board meeting ended in less than two minutes because protesters, many not even living in District 81, refused to wear masks. 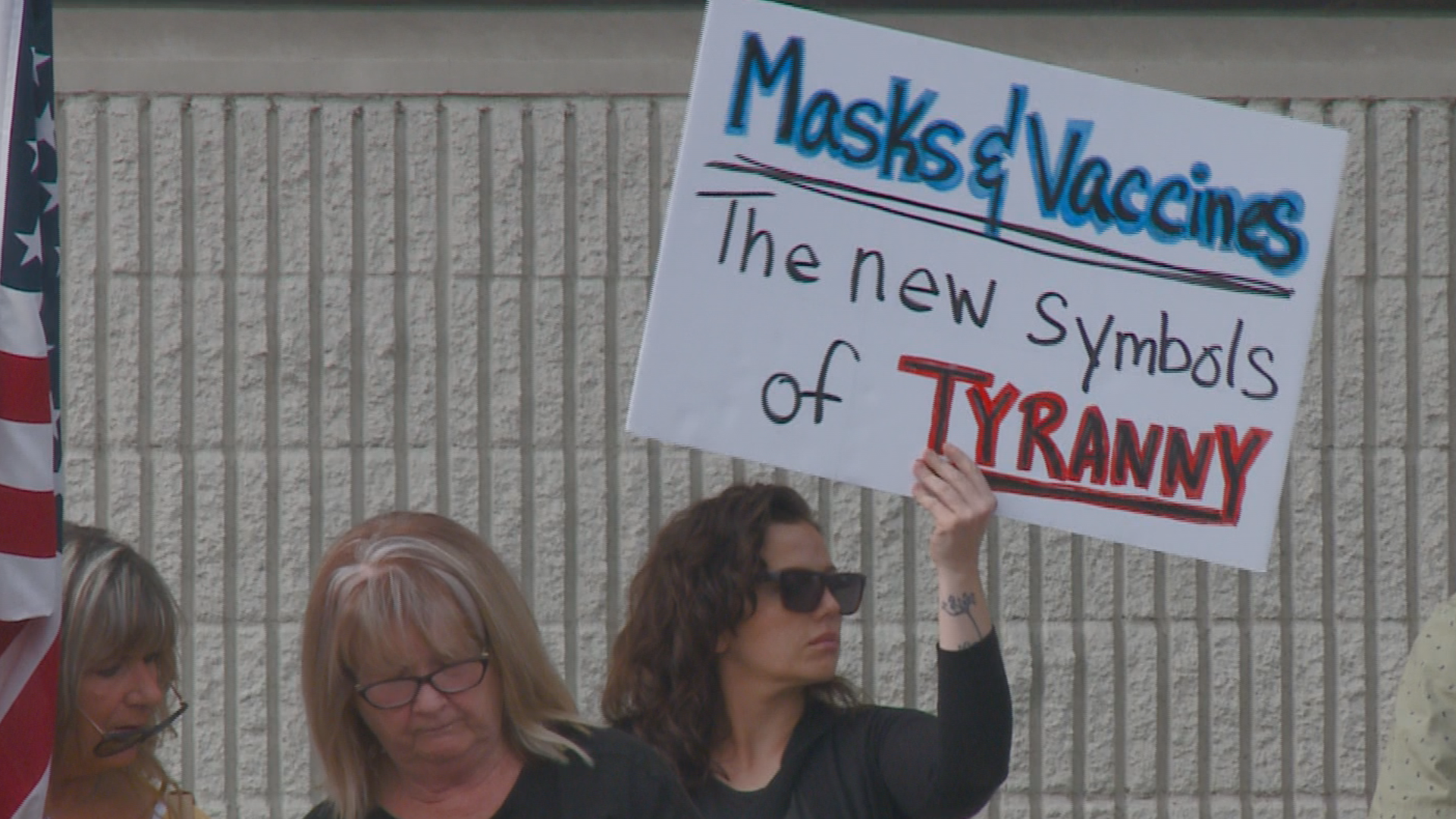 SPOKANE, Wash. — Spokane Public Schools has had enough. The final board meeting before 30,000 students return to school this fall ended as quickly as it began on Wednesday evening.

SPS doesn't have too many rules to follow in regards to making public comment. All that the district asks is that community members wait until their allotted two minutes to speak and in-person commenters follow school and government building guidelines. In-person attendees must follow the statewide mask requirement which went into effect on Monday.

After less than two minutes, the meeting was adjourned due to anti-mask protesters refusing to listen to the school board.

It was an explosive start to the meeting, but board members knew the evening would be intense. Anti-mask and anti-vaccine protests have been disrupting SPS and other school district meetings for weeks now. After a hostile meeting in mid-August, Board President Jerrall Haynes said anti-maskers will not be taking over this important meeting.

The board had an extremely large agenda. Among the numerous topics, there was reopening information, discussions of the budget and equity policy feedback.

"The reality is that next week, Thursday, 30,000 students are showing up to school," Haynes said. "We have a lot of decisions to make between now and then."

There was no time in the agenda to spend arguing about a policy that is now state-mandated.

"If everyone's not willing to abide by [the mask mandate], then we'll find another way to have our meeting and get our jobs done," he added.

Haynes did exactly that. He saw the Central Valley school board struggle to maintain control over their meeting on Monday. After just 30 minutes, the CVSD board had to stop the meeting due to protesters refusing to wear a mask and being disruptive.

"We're expecting a lot of people to show up and to hear a lot of public comments," he said. "We've seen by neighboring school districts, some contention lately. We expect some of that, a little bit possibly, too."

Haynes was prepared — and he had the time.

Starting the meeting, the president addressed the state and school policy of mask-wearing. He then turned his attention to the protesters, asking if they would be putting their masks on. When they said no, he swiftly shut down the meeting.

"With that being said," he started. "This is now over."

This may be the record for quickest Spokane Public Schools board meeting of all time.

In less than two minutes, Board President Jerrall Haynes ended the meeting. Protestors refused to put their masks on, so Haynes kicked them out and made the meeting 100% online. @KREM2 pic.twitter.com/ATosQKGnYu

With the extensive amount of material on the agenda, Haynes switched the meeting to online-only. This was not a spur-of-the-moment decision.

"We've prepped for safety and emergency response situations if those should arise for any number of reasons," he said. "We always have health and safety specialists here on site whenever we do have our board meetings because you never know what might happen."

The board, of course, wants to hear from the community, he said. However, respect needs to be given to the board and to the Department of Health's guidance.

"As a school district, we've decided that the course that we're going to chart is to follow what public health guidelines are and what the laws are," SPS Superintendent Dr. Adam Swinyard added. "We want to continue to listen, we want to continue to respect that there are varying viewpoints regarding this issue.

"We also want to continue to be really clear that Spokane Public Schools is going to do what we've historically done, and that is always follow public health guidelines and not pick and choose which to follow."

During the online public comment aspect of the meeting, the majority of people were extremely complimentary of the mask mandate, especially students. Nearly every person who identified themselves as an SPS family spoke positively about the board's decisions.

Haynes noted that many of the anti-maskers that attend the SPS meetings don't live in District 81. While attending protests, the majority of people tell KREM 2 they attend rallies at all different schools, bouncing from district to district. Oftentimes, people who speak up against SPS during board meetings belong to Liberty School District or Cheney School District.

Spokane Public Schools Foundation presented its annual grant award amount. This included an overview of the grant process as well as examples of projects and activities that have been funded by foundation grants.

The equity policy that was brought up in a previous SPS meeting was unanimously approved.

Although not a major portion of the meeting, priority goals and objectives for the school year were discussed. prioritizing resources and training to ensure high levels of inclusion for students with disabilities, developing a mentoring model and initiate pilot program during the year and continuing a curriculum audit and update for all social studies courses and provide training to social teachers on addressing key concepts related to race and equity. These objectives were also unanimously approved.

The recommended budget was unanimously approved.

Finally, the School Board received an update on schematic designs for the Carla Peperzak Middle School and Sacajawea Middle School projects. The Peperzak project has been under major fire from the South Hill Dog Park community.

There are about 40 protestors currently outside the SPS building.

I’ve met most of these anti-maskers at different rallies over the past few weeks. Many of them don’t live in District 81. They have been attending protests at all different schools, an organizer said. @KREM2 https://t.co/c7Vtcl7TbA pic.twitter.com/1BNAsKbg0o