The Spokane County Sheriff's Office said the 19-year-old victim was meeting up with the teenage suspects to purchase a vape pen. 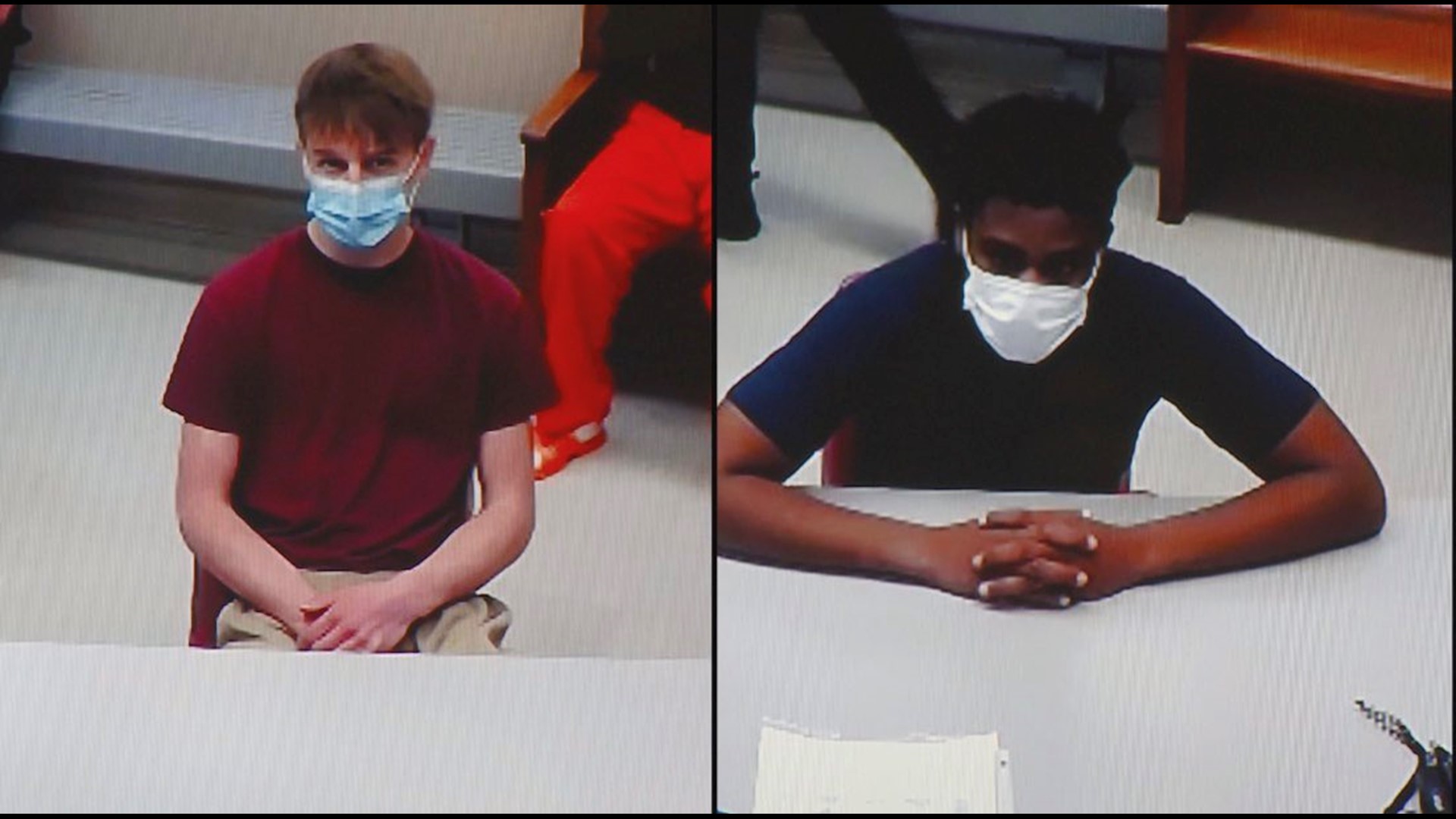 SPOKANE, Wash. — Two teenagers accused of shooting a man on Spokane's South Hill Sunday are being charged as adults.

Logan Birrell, 16, and Tobias Hamm, 17, appeared in court Tuesday afternoon. During the court appearance, it was announce the two teens would be charged as adults in the case. The two did not enter a plea Tuesday because they are still awaiting to be assigned attorneys. The two are charged with first degree robbery and first degree assault.

Newly filed court documents give insight into how the suspects may have obtained the firearm used in the crime.

The shooting happened at 2:35 p.m. on Sunday on Spokane's South Hill near the intersection of East 55th Avenue and South Crestline Street. The victim remains hospitalized but officials say he is stable.

Spokane Police Department officers were the first to arrive at the scene and found the 19-year-old man in a red Toyota Camry with a gunshot wound to his chest, according to a press release from Spokane County Sheriff's Corporal Mark Gregory.

According to Gregory, the victim met the suspects on the side of the road to purchase a vape pen. Court documents said the victim arranged to meet up with Hamm for the purchase of the "puff bar" using Snapchat.

The victim remained in the vehicle as the suspects approached the car, according to the release.

Gregory said one of the suspects pulled out gun soon after and demanded the victim’s car and money. The victim thought the gun was fake and started to drive away when he heard at least one gunshot and felt pain in his upper body.

Gregory said when the victim realized he was shot, he stopped the car on 55th Avenue near Crestline Street and called 911. The victim got help from citizens and a doctor who happened to live in the area until police arrived, Gregory said.

According to investigators, witnesses reported seeing two people run away from the car.

Gregory said the suspects' names were obtained during the investigation and they were located at home in the 6100 block of South Pittsburg. According to court documents, the home belonged to Birrell's parents.

According to court documents, on or about Oct. 16 Birrell's mom searched his bedroom and found two of the Glock's magazines in a backpack. When Birrell's dad went to return the magazines to the locking golf bag case, he discovered the gun was missing, documents say.

According to court documents, Birrell's dad did not know where his gun was at the time of the incident.

Birrell's dad said his son and Hamm were gone from about 1:15 p.m. yo around 5:30 p.m. on the day of the shooting and he didn't know where they were, documents say.

A search warrant was obtained for the home.

"It is really scary because they look just like regular kids," a neighbor said. "I would have never expected this."

At least five police vehicles surrounded the house at around 6:30 p.m. on Sunday evening. They were there for about eight hours, he said.

During a search, detectives found a semiautomatic handgun of the same caliber of the spent casings recovered at the scene, Gregory said. Court documents said the gun was found in a backpack in the closet of one of the home's two basement bedrooms.

According to court documents, the gun was loaded with a magazine having a capacity of 17 rounds but contained only 15 unfired 9mm.

The suspects were not charged with attempted murder because that is much more difficult to prove, according to Gregory.

Birrell and Hamm were taken to the Spokane County Jail for booking but they are being housed in juvenile jail. Both are being held on $250,000.