Employers throughout the country are facing a worker shortage. Multiple businesses in Spokane County and North Idaho are combating it with a bonus for new hires. 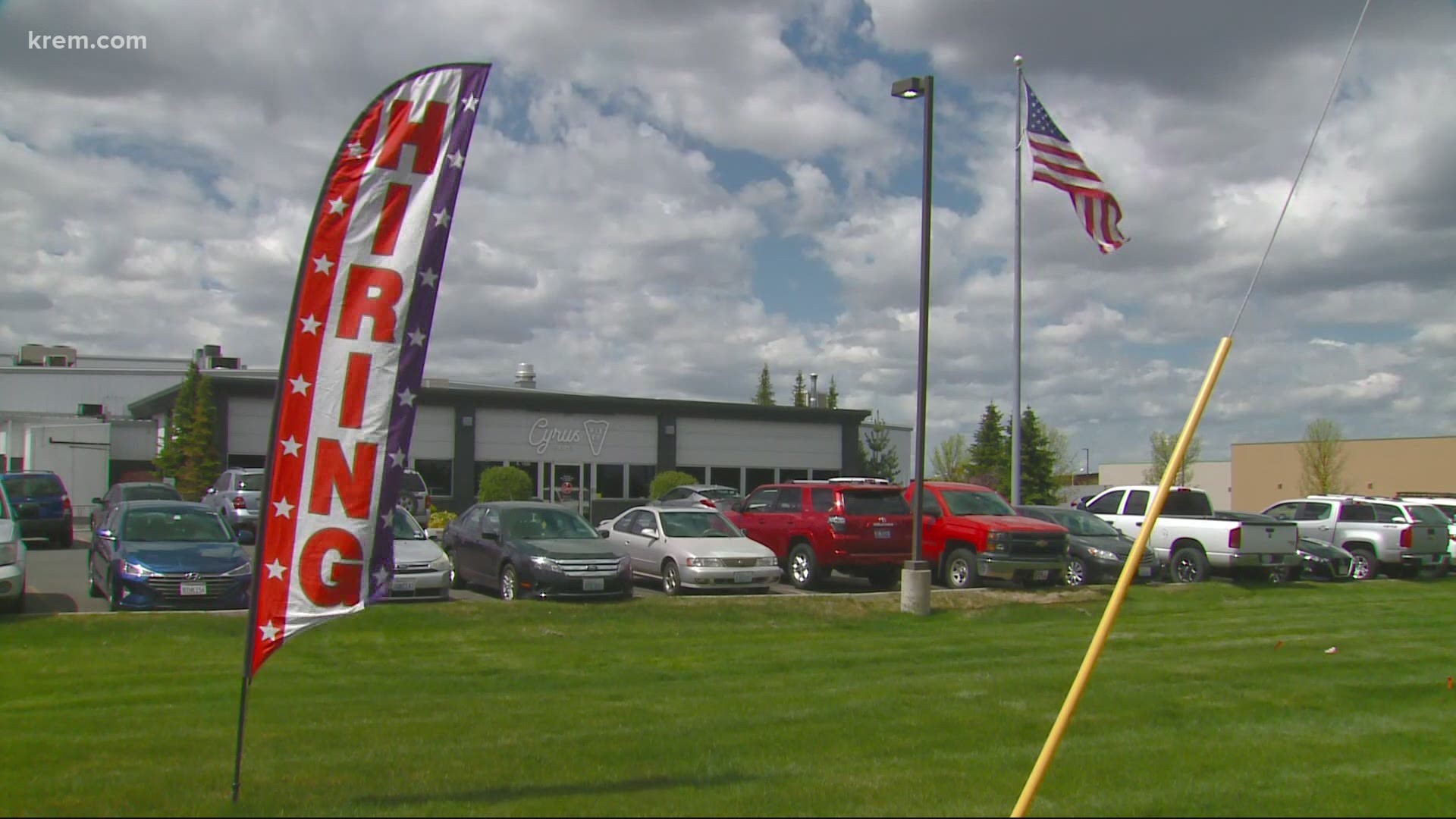 SPOKANE COUNTY, Wash. — Amid a nationwide worker shortage, a handful of businesses in Spokane County and North Idaho are offering cash incentives for new hires.

Companies throughout the United States are advertising more jobs than they were before the pandemic, when the unemployment rate was a 50-year low of 3.5%, so they clearly want to add workers. Yet hiring stumbled in April because many employers couldn't attract as many as they needed.

Some unemployed people have also been reluctant to look for work because they fear catching COVID-19. Others have entered new occupations rather than return to their old jobs and many women, especially working mothers, have had to leave the workforce to care for children.

RELATED: Spokane businesses are hiring but many can't find employees. An economist explains why

In an effort to combat the hiring issues, Cyrus O'Leary's Pies in Airway Heights and Old European on Division Street in North Spokane are offering $500 bonuses right now for workers.

Cyrus O'Leary's announced on Monday that the business is offering a $500 sign-on bonus for all evening shift new hires. The bonus is contingent on no attendance, safety or disciplinary issues for 60 days. Jobseekers can apply online or via Facebook and walk-in applicants are welcome.

The company said the move happened due to a a drop in applications.

"I'd probably say since the start of the pandemic, for sure," said Cyrus O'Leary's HR Recruiter Shelby Conner said about the drop in applicants. "But it's [the problem] is, you know, the duration, how long this has lasted. The applicant drought just made it overall challenging, but definitely more recently, and especially with our graveyard team, which is why we are specifically targeting this market in this position."

So far, its working for Cyrus O'Leary's.

"We actually just rolled it out effective Friday," Conner said. "So I think that was the 7th [of May]. So since then, we've definitely seen a spike in applications, which has been great."

Anthony Anton with the Washington Hospitality Association said this is a result of an industry-wide hiring crisis. Businesses have gotten creative in response to the crisis.

"In hospitality, you quickly learn that complaining about it doesn't get the dishes washed. You've got guests to serve, so we've just got to come up with a solution. And so I think what you're starting to see is people saying, 'Alright, how do I fix this issue? And how do we move forward?'."

Anton said that instability has been one of the biggest drivers behind the hiring crisis. With counties able to be moved back to lower capacities every three weeks, people have expressed that they don't want to get a job one week, and then turn around and restart the unemployment process the next week.

"In Idaho we're struggling to find anybody, so we started a hiring bonus there," said Jason Green of Eat Good Group, a company that owns restaurants in Washington and Idaho.

Green said they normally have a much higher demand for employees during the summer months. To combat the shortage, they are offering a total of $1,000 in incentives to new back-of-house hires and those who already work in their restaurants in Idaho.

For new back-of-house hires, $250 bonuses will be given right away, with another $250 coming after six weeks. Then, if the employee is still working come September, they will receive another $500, for a total of $1,000. At that same time in September, employees who were already with the Idaho restaurants will also get an $1,000 bonus.

"It has been somewhat successful, he said. "I think we've hired six people in the last three weeks. We're getting a ton of resumes, we are trying to, the biggest challenge is getting people called back and getting them engaged very quickly."

In a Facebook post on May 6, Old European said it has been staying busy and, as a result, is "in desperate need of a few cooks" to join its team. The restaurant asked people in the post to send anyone their way who would be a good fit.

The benefit for someone who refers a jobseeker to Old European? A $500 gift card to the restaurant after the hired employee works 90 days, according to the post. The hired employee will also receive a $500 cash bonus after work for 90 days.

RELATED: Old European in 'desperate need' of cooks and is offering $500 cash bonus to new hires

Those who are interested in applying can send a direct message to Old European on Facebook or Instagram, apply in person at Old European or Little Euro, or email Jeff at littleeuro@gmail.com.

Old European and Cyrus O'Leary's are not the only Spokane businesses that have offered an incentive to new hires.

Davenport Hotels is looking to hire dozens of people for management and hourly positions. To combat the ongoing employee shortage, the company has increased its hourly wage to about $15/hour and is offering a signing bonus.