Idaho earthquake explained: What made this quake so unusual?

Idaho is one of a few U.S. earthquake hot-spots outside of the primary fault line that extends along the coast of California. 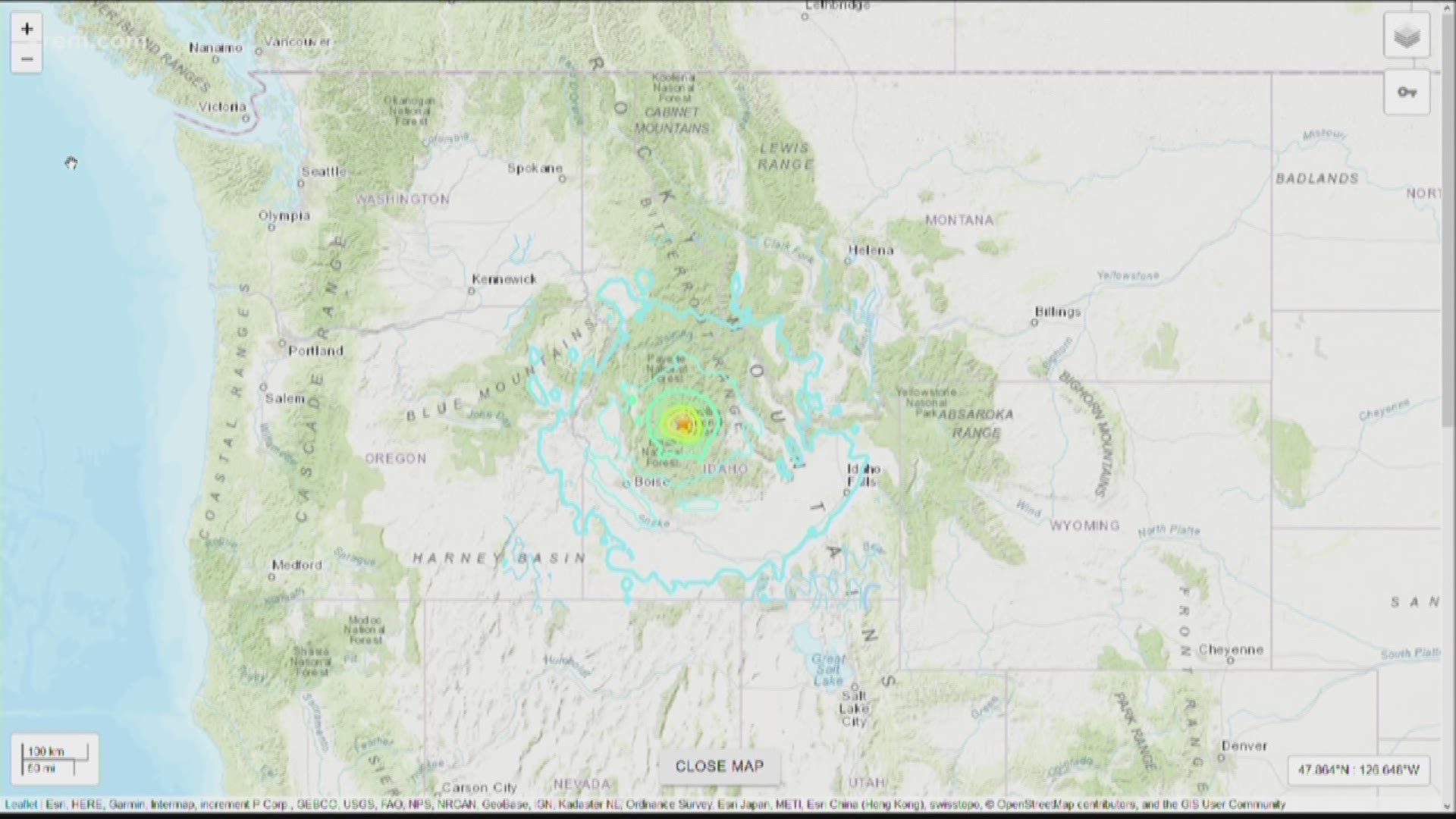 SPOKANE, Wash. — Idaho's 6.5 magnitude earthquake on Tuesday, March 31, was the strongest in more than 36 years across the state.

Now, "Idaho" and "earthquake" are not two words you'd expect to find in the same sentence. When we think of U.S. earthquakes, California and the San Andreas Fault are probably the first things that come to mind. But the truth is that earthquakes can, and have, happened over most of the United States.

A map from the USGS shows the combination of recorded earthquakes and a prediction of where they may occur and be most frequent. It's no surprise that California sees the most earthquakes in the contiguous U.S., as that is where the tectonic plates of the Pacific and North America meet. However, within the North America tectonic plate, there is plenty of earthquake activity. This is known as "mid-plate tectonic activity."

Notice where there are "hot spots" in red, including the Puget Sound, the Missouri Bootheel, and parts of the Northern Rockies - including central Idaho. That spot in central Idaho is spot on where Tuesday's earthquake occurred as well as the last big Idaho earthquake in 1983.

After speaking with Paul Bodin, who heads the University of Washington's Seismology Lab, he highlights that while there are types of earthquakes that may be common for this particular location, the data from Tuesday's earthquake may be a type of outlier.

In this part of the world "basin and range" earthquakes are the norm. As the crust of the earth stretches east-to-east, it creates not just the basins/valleys and ranges/mountains, but enough pressure that a slip or jolt in the Earth's crust would cause an earthquake. That describes the 1983 Idaho quake. But 2020's quake doesn't match that description. The data from the earthquake showed a north-to-south motion, not east-to-west along the basin & range.

Inter-plate fault lines have been been thoroughly studied, so this very well could be a new, undiscovered fault, but that may not be known for month or years. The USGS would need to study it first.

Along those same line, that's why eastern Washington typically doesn't see many strong earthquakes. There haven't been enough earthquakes to know or study if there are any fault lines. The only anomaly is that of Spokane's 2001 series of earthquakes, the strongest being a 4.0 magnitude. A fault might sit beneath the city. But studies up until this point are inconclusive.

Earthquakes are measured in "magnitude" which represents the energy and amplitude (up-and-down shaking motion of the earth) of the quake. Magnitude is a logarithmic scale, which means for each 1 point of magnitude increase, the amplitude of the quake is 10-times as much and about 32-times more powerful. So a 2 point increase would be 100-times larger and 1024-times more powerful respectively.

RELATED: 'We felt the whole house move': Reactions to the Idaho earthquake felt across state