Some drivers caught in I-90 pileup left frustrated by tickets

Some drivers were ticketed for driving too fast for conditions, despite going the speed limit or slower. 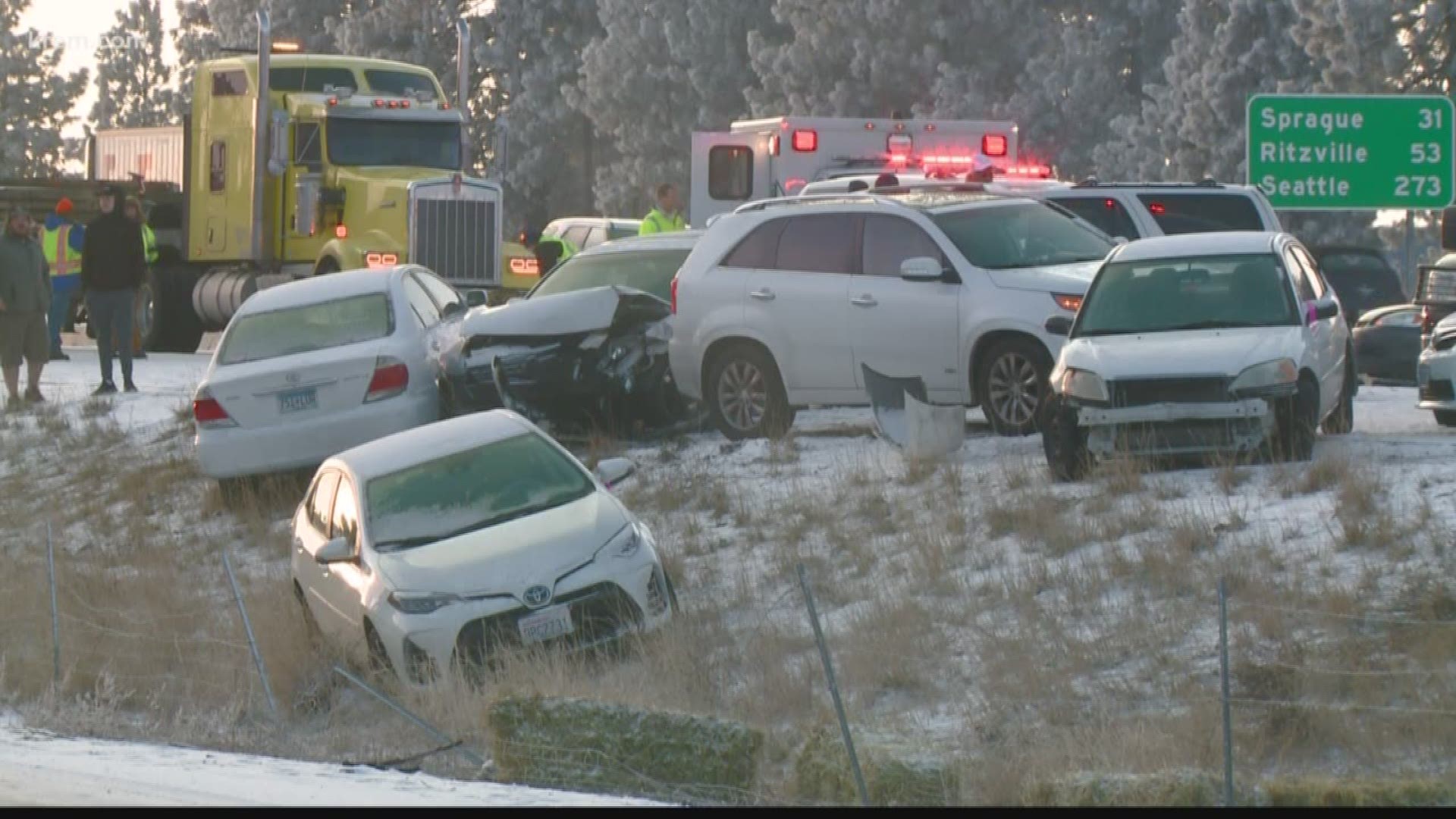 SPOKANE COUNTY, Wash. — Some drivers who crashed during last week's massive pileup on Interstate 90 west of Spokane received an additional surprise after already being caught off guard by weather conditions.

That surprise? Traffic tickets for driving too fast for conditions.

A brief blitz of winter weather created slick conditions on I-90 last Tuesday afternoon, snarling traffic and closing some lanes of the freeway near the Geiger Boulevard exit and hospitalizing a handful of drivers.

According to Washington State Patrol, troopers responded to 35 separate crashes due to the snow. Notably, a 38-car pileup brought traffic to a standstill.

A handful of drivers were transported to local hospitals for minor injuries, authorities said at the time.

“The ice snuck up on you. It was pretty scary, actually," said Dillon Grewell, who crashed while attempting to avoid the pileup last week.

Grewell also works at KREM 2 as a broadcast technician.

"It really came out of nowhere to be honest," he said regarding the weather.

In an effort to slow down on the slick highway and avoid hitting any other cars, Grewell drove into the median and subsequently damaged various sections on the driver's side of his Subaru sedan. The car is now receiving around $6,000 in repairs.

To add insult to injury, Grewell says a responding law enforcement officer issued him a $190 ticket for driving too fast for conditions.

“When I had asked the officer how fast I should have been going for these types of road conditions, just for future reference, he said ‘Fast enough to not crash,'" recalled Grewell. "In my opinion, I could have been going 30 [miles per hour] and it still would have happened.”

When asked about tickets issued to wrecked drivers, WSP Trooper Jeff Sevigney explained that citations are based on each individual incident. While a driver may have wrecked their car to avoid a pileup, drivers are still responsible for their vehicles as they drive, he said.

“You have to keep your car on the roadway," the trooper said. “Ultimately, you’re responsible for your vehicle.”

Sevigney added that drivers are responsible for being aware of weather conditions, in addition to maintaining safe speeds and following distances. He also noted temperatures the afternoon of the pileup never rose above freezing and drivers should have expected any additional moisture or precipitation to freeze.

RELATED: Why WSDOT did not pre-treat I-90 ahead of pile up

“Drivers didn’t adjust to that quickly enough," he said.

How does WSDOT decide whether to pre-treat roads?

The Washington Department of Transportation did not pre-treat I-90 the day of the wrecks or apply any de-icer prior to the crash, the agency previously said, citing weather forecasts at the time.

"We must all remember that weather is unpredictable and since this unique snow event wasn’t predicted in this area at that time, I-90 had not been pre-treated," WSDOT said in a statement last week.

When contacted by KREM on Monday, WSDOT said that protocol relating to how roads are pre-treated depends on each weather event.

“It’s kind of a case by case basis," said Beth Bousley, an agency spokeswoman based in Spokane. “There are a lot of things that come into play.”

Bousley reiterated that WSDOT keeps a "very close eye on the weather forecast." In addition to examining current conditions, WSDOT works with first responders to determine if applications of salt, sand, or magnesium chloride are appropriate.

However, Tuesday's event appeared to be a rare occurrence, Bousley said.

“Basically, there was no indication that there was going to be any kind of incident that would have impacted the roadways or traffic," she said. “It was a really unique snow event.”