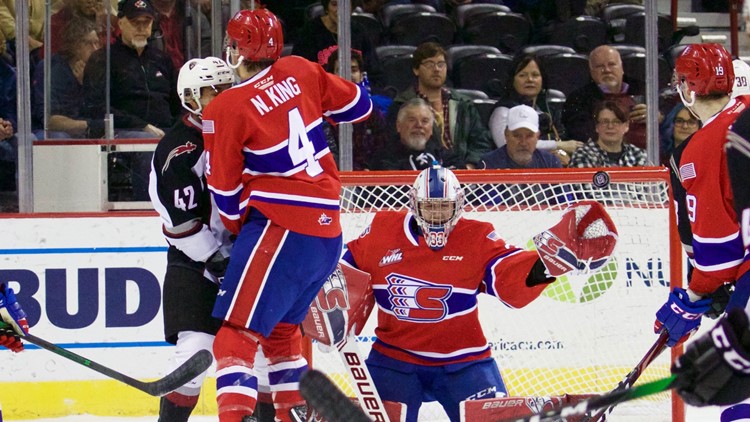 December is here and that for me has always meant the real start of hockey season. I know the schedule says the end of September, but when the season hits the final month of the calendar year, that is when play starts to rev up for me.

It also means the season is nearly half over as the first half has just 3 weeks remaining until the Christmas break. The Chiefs have started to find their game after an up and down start to the campaign, winning 6 of their last 9 contests to move into 3rd place in the U.S. Division.

More importantly, the team is remaining in striking distance for the top of the division as Spokane began the week 6 points back of division co-leaders Everett and Portland.

The Chiefs started the week finishing off a 3 game home stand against division rival Seattle. The game was the first of 4 that the Chiefs and Thunderbirds will play in the month of December and was an opportunity for Spokane to open up some ground on the last place T-Birds in the division.

Seattle was 10 points back entering Tuesday's contest at the Spokane Arena as the two clubs met for the second time this year. The Chiefs had won handily 5-1 in the first game back on October 4th in just the 4th game of the season.

It appeared the second time around would be just as easy early in the contest as Eli Zummack finished off a great pass from Luke Toporowski just 2:43 into the game to make it 1-0 Spokane.

Seattle had other thoughts, though, as the Thunderbirds scored off a breakaway midway through the period to even the game at one. For the first time in 3 games, the Chiefs got power play chances, and Spokane would take advantage of the second in the first period when Bobby Russell scored off a wrister from the blue line at 16:26 to take a 2-1 lead after one.

The Chiefs didn't rest on their laurels starting the second as Noah King finished off a rebound off a Jack Finley shot only 19 seconds into the period to pad the margin to 3-1.

Spokane goalie Lukas Parik kept the lead at two through 40 minutes with a couple of highlight reel saves on his way to a 33 save performance. The third period would see a lot of chippy play, including a game misconduct to Seattle defenseman Cade McNelly late in the third that led to a Chiefs 5 on 3 power play chance.

Bear Hughes, who earlier in the day was named the WHL's November rookie of the month, finished off an Eli Zummack pass for his 11th goal of the year to cap off a 4-1 victory. It was a nice way to finish off the 3 game home stand as the Chiefs picked up 5 of a possible 6 points.

The win kept the Chiefs 6 points back of first place Portland, who won in Prince George, and 4 behind second place Everett. More importantly, Spokane was now 4 points up on 4th place Tri City and 12 ahead of last place Seattle as the Chiefs headed to Vancouver for a Friday night tilt.

Spokane had lost a crushing 3-2 overtime decision the previous Friday at home to the Giants after blowing a 2-0 third period lead. It was the third time in the last 5 meetings between the two clubs the Chiefs had coughed up a 2 goal third period lead in a loss to Vancouver.

The night before the game, Spokane acquired 20 year old forward Leif Mattson from Kelowna to help boost the offensive production up front. As a result, the team released forward Baron Thompson, who was brought in to replace Jake McGrew, who was lost for the season due to injury. The team also left goalie Lukas Parik back in Spokane to rest him for his final start against Tri City before he heads to the World Junior Tournament. Campbell Arnold got the start in goal for the Chiefs as the team looked for their first win in Vancouver in two seasons.

The Chiefs jumped out quickly as Eli Zummack scored for the second straight game with his 9th of the year just 1:22 into the contest to give Spokane a 1-0 lead. Connor Gabruch would extend the lead with a tip of a Matt Leduc shot from the blue line just over 14 minutes in to make it 2-0 Chiefs. Vancouver would counter on a power play goal with just 15 seconds left in the first to cut the margin to 2-1 after 20 minutes.

The Chiefs and Giants would battle through a scoreless second period as Arnold turned away all 9 shots in the frame. Vancouver turned up the pressure in the third as they put up 15 shots on Arnold in the period. Arnold was equal to the challenge as turned aside the final 24 shots the Giants put up as Spokane hung on for a 2-1 victory. It was the Chiefs third straight win and sent the club home hoping to move to 3-0 in December as they hosted Tri City the next evening.

Saturday's game marked the final game over the next month for Parik in net and defenseman Ty Smith, who will head out to Team Canada's camp. Spokane was also hoping to open up more room on the Americans, who were coming in well rested after being idle the night before.

It was the annual Teddy Bear Toss night for the Chiefs as well, and Adam Beckman would send the sellout crowd into bear tossing mode as he scored his 14th of the year just 41 seconds in to give Spokane an early 1-0 lead.

The Chiefs dominated the first, out shooting the Americans 15-5, but the Ams would even the game with a Nick Bowman tip past Parik late in the period to send the game to the second tied at one.

Tri City would take the lead 2:45 into the second, but the Chiefs would equalize as Cordel Larson scored on a rebound of a Leduc shot midway through the period. Once again, the Americans would score late in the period as Tri City took a 3-2 lead after two periods despite being out shot 33-13 through 40 minutes.

After an all night bus ride from Vancouver, you had to wonder how much was in the tank for Spokane, and the answer was...plenty. Eli Zummack scored unassisted just over 2.5 minutes into the third to re-tie the game at three. The Chiefs would take their first lead since Beckman's teddy bear goal as Luke Toporowski fired home his 6th of the year at 8:18 to put Spokane ahead at 4-3.

Parik and the defense did the rest as they killed off a power play chance from the Americans in the final 3 minutes and then withstood the extra attacker from the Ams in the final minute to preserve their third straight win over Tri City 4-3.

The victory kept the Chiefs within 6 points of division co-leaders Everett and Portland and moved Spokane 8 points up on Tri for 3rd, and 14 ahead of 5th place Seattle. The win was a season high 4th in a row for Spokane and capped a perfect 3-0 week for the Chiefs, which included tough back to back wins over Vancouver and Tri City.

The Chiefs will now hit the road for the final 5 games of the first half of the regular season. Spokane will play at Seattle on Tuesday, before finishing with 4 games in 5 nights beginning in Seattle again on Saturday.

After those two games in Seattle, the Chiefs will take on Everett on Sunday with a chance to get their first win over the Silvertips this year and then head to Victoria for back to back games.

RELATED: Chiefs Blog: A look back at the Chiefs 3 game week with Everett, Vancouver and Victoria