Minshew for Heisman? Let's talk about it

Minshew has become a dark horse candidate for the award in the last few weeks. 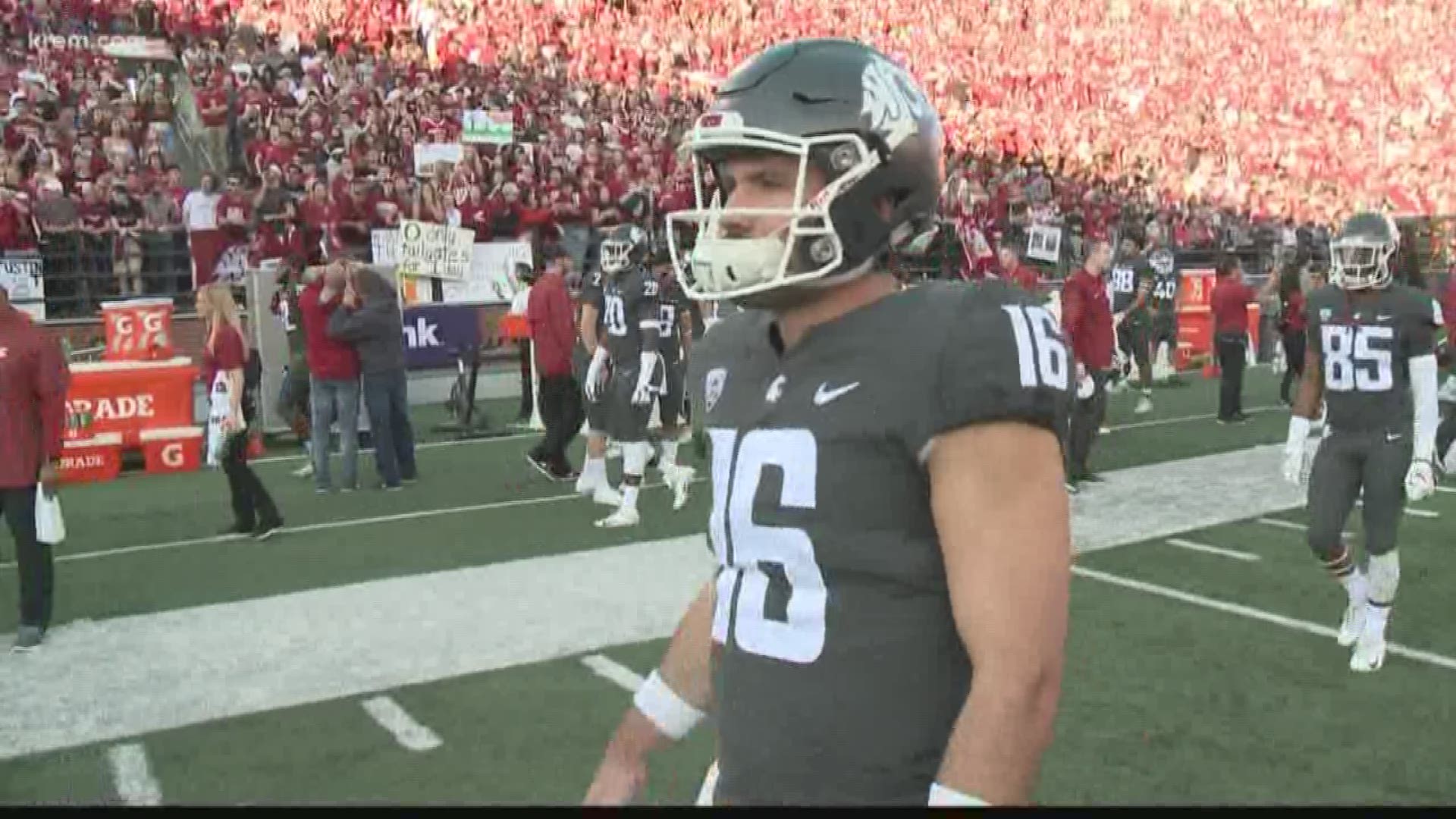 After the WSU's win over Stanford last night, the sideline reporter asked Mike Leach what he saw from his quarterback that helped lead the team to a win. Leach responded with only one sentence: I think he's the best quarterback in the country.

It ended up being a bit of an awkward moment because the reporter expected Leach to continue talking, but after the performances Minshew has consistently put up this season, does Leach need to say anything else? Minshew has thrown himself into the national spotlight, and now has thrown himself into the Heisman conversation. Mustache, aviators, and all.

Here's some reaction from around the country to Minshew's performance yesterday:

USA Today's George Schroeder: "Gardner and his mustache should be on everyone's Heisman radar."

Mike Leach is not wrong. Gardner MInshew ought to be on everyone's Heisman radar:

Tua. Kyler. Gardner and his mustache.

(But it feels like it’s a whole lot harder to come from nowhere when it’s a West Coast nowhere like Pullman.)

The Pac 12 Network's Yogi Roth: "If the season ended today, Minshew would be a Heisman candidate."

My @WSUCougFB takeaways:
- Minshew is a #Heisman finalist if season ended today. If voters/networks are not talking about him they are not doing their job
- Team showed ability to respond after 2nd qtr ‘convo’ w/ Coach Leach
- DL/LB legit, vs every style of offense they showed up

Gardner Minshew is absolutely part of the Heisman discussion. The magic continues for Wazzu. pic.twitter.com/A1hnVJ1hKn

The Athletic's Stewart Mandel:"I got the see the Gardner Minshew experience in person tonight. The Wazzu QB should absolutely be a part of the Heisman conversation"

I got to see the Gardner Minshew Experience in person tonight. The Wazzu QB should absolutely be in the Heisman conversation. https://t.co/AxTHVid3tD

Gardner Minshew has gone from relative unknown around the country, to everyone's favorite Heisman dark horse in the matter of a few weeks.

Here's why: Minshew leads the country in passing yards with 3,183. No one else has gotten over 3,000 yet this season.

With all those attempts you'd think Gardner's completion percentage may be lower than other top quarterbacks, but he comes in at 71%, which is outstanding. He ranks sixth in the country in that category and he's only a tenth of a percentage point out of fifth.

So we've set up just how great of a season Gardner is having, so the next natural question is where does he stack up against the other Heisman candidates?

HOW MINSHEW STACKS UP

There is so much momentum behind Tua winning the Heisman that I don't think anyone can catch up, but he lives up to the hype.

Those are exceptional numbers.

He has way more yards per attempt than Minshew, but something that is interesting is that the two have near identical completion rate percentages, and Minshew has thrown the ball way more than Tagovailoa.

Once again Minshew's numbers hold up.

Honestly the only category that both of these quarterbacks stand above Minshew in is yards per attempt, and that makes sense considering they are throwing the ball much less than Minshew and therefore have fewer short passes.

To put it simply: If those two guys are headed to the Heisman Trophy ceremony, Minshew should be too.

Here's what Leach had to say yesterday about whether Minshew's performance last night should put him in the Heisman conversation:

"It should. It kind of depends on what they give the award for. (The voters) seem very confused right now. (But) what it use to be is, who had the biggest impact on their specific team. I'd love to hear the guy who outshines Gardner when it comes to that."

And that my dear friends, leads us to maybe the most important part of all.

Minshew has played a huge role in taking a team that was picked to finish fifth in the Pac-12 North all the way to becoming a fringe College Football Playoff contender.

Unlike an Alabama or an Oklahoma, Washington State doesn't have the luxury of bringing in top 10 recruiting classes each year.

Unlike an Alabama or an Oklahoma, Washington State isn't on national television nearly every week.

Unlike an Alabama or an Oklahoma, Washington State doesn't have a rich tradition of national championships.

But what was never unlikely in this whole situation was Gardner Minshew's will. To put it simply: The dude just wants to win more than anyone else out there on the field.

How his will has elevated the play of a team that many at the beginning of the season thought had no business even going to a bowl game... Well, he may not be the favorite to win in the pundits eyes, but he should be the favorite of anyone who's ever been an underdog.