In total, ten players with local ties participated in the event. We grade seven of those players' showings. 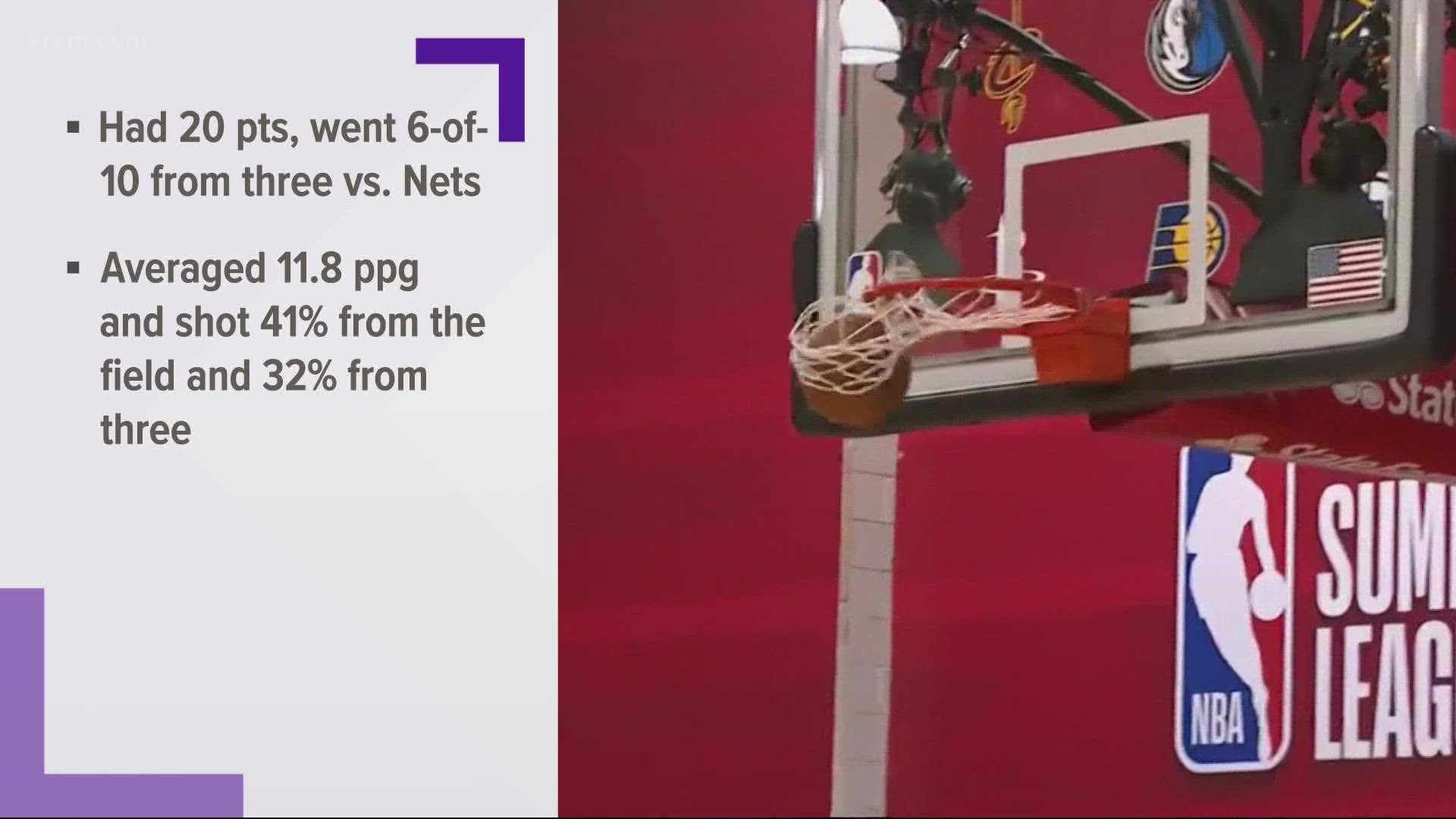 LAS VEGAS — Summer League wrapped up on Tuesday in Las Vegas. Ten players with local ties played in the event with seven seeing significant playing time. Today we look back and grade how those players faired.

We're starting off with Jalen Suggs. Although Suggs only played two complete games in Summer League due to a thumb sprain, he was an absolute star.

He followed that up with 16 point, 8 rebound, 5 assist performance against Cleveland.

This one is easy, folks: Jalen Suggs earns an A.

Melt of Jalen Suggs in the last four minutes of the game/OT:
-Gives Magic first lead since 2nd quarter with the three
-Forces OT with the block
-Six of eight Magic points in OT
-Finishes it off with another big block pic.twitter.com/Zz6iac83ln

Like Suggs, Killian Tillie also had an injury that sidelined him for some of Summer League. However, he had a decent showing between the two games he played in Salt Lake City's Summer League and the Las Vegas Summer League.

His best game was a 20 point outburst against Brooklyn that included shooting 6-of-10 from behind the arc. Overall Tillie averaged 11.8 points per game and shot 41% from the field.

Not nearly at the level of Jalen's performance, but nothing to snuff at. I'm going with a B+.

Some nights, like on his 17 point, 5-for-7 from three onslaught versus Salt Lake City, it worked out well. Others, like the back-to-back games he had against the Nuggets and Kings where he shot 3-of-16 overall and went 0-for-9 from three, the volume shooting experiment didn't go so great.

Overall, Franks worked his way in to Dallas' starting lineup and averaged 10.6 points and 4.6 rebounds per game, so due to those stats I'm giving him a B.

Like Tillie and Franks, Corey Kispert had one game where he really stood out.

Against the Bucks, he went 7-of-12 from the field and had four threes for 18 points.

Overall, his performance in Vegas left a little to be desired as he shot 36% from the field and 29% from three.

He did have a three that forced overtime though against the Nets. That bumps him up a bit from a shooting performance that he is probably not super pleased by. Corey Kispert gets a B-.

Petrusev started for the 76ers, but honestly the production just wasn't there, at least in terms of scoring.

It was definitely documented throughout his season in Serbia that his three point shooting had improved, but that did not shine through in Vegas. Shooting threes is a necessity for big men in this day and age, and it did not come together for Filip this time around.

However, his performance is bolstered for having eight blocks in his first three games. Just to put this in perspective: Filip had 26 blocked shots his entire sophomore year, so 8 blocks in three games is a big deal for him.

Because of those blocks, we'll give him a C+.

Filip Petrusev says no 🚫@sixers and Celtics in the second quarter on NBA TV! #NBASummer

CJ Elleby saved himself from a worse grade in his final game on Tuesday with a 13 point, 10 rebound performance against the Rockets.

Unfortunately his summer league just wasn't up to par, especially for someone who's spent a year in the NBA. He shot 28% from the field and was a horrendous 3-of-21 from the three point line. That's 14%. Even in today's performance, he was 0-5 from three. That can't happen for someone who's literal position is shooting guard.

He did average five rebounds per game, which for a guard is pretty solid. I just think he needs to be better than this in his second year.

Joel has the most data points of anyone as he played in both the California Classic and Las Vegas Summer leagues and yet, he only had one game where he got above ten points. That was a 4-5 performance for 11 points and five assists against the Knicks.

Overall, Joel averaged just 4.6 points per game in Summer League and had four games with four points or less including two zero point contests. He also had just two three pointers and averaged 3.3 rebounds per game, which is average for a guard.

It pains me to say it, but Joel gets a D. It seems like this transition hasn't been the easiest for him just yet.