'The most ugly, beautiful shot': An oral history of Casey Calvary's tip in

Calvary's shot against Florida in the Sweet 16 in 1999 remains the most famous shot in Gonzaga history. It set in motion the Gonzaga we now know today. 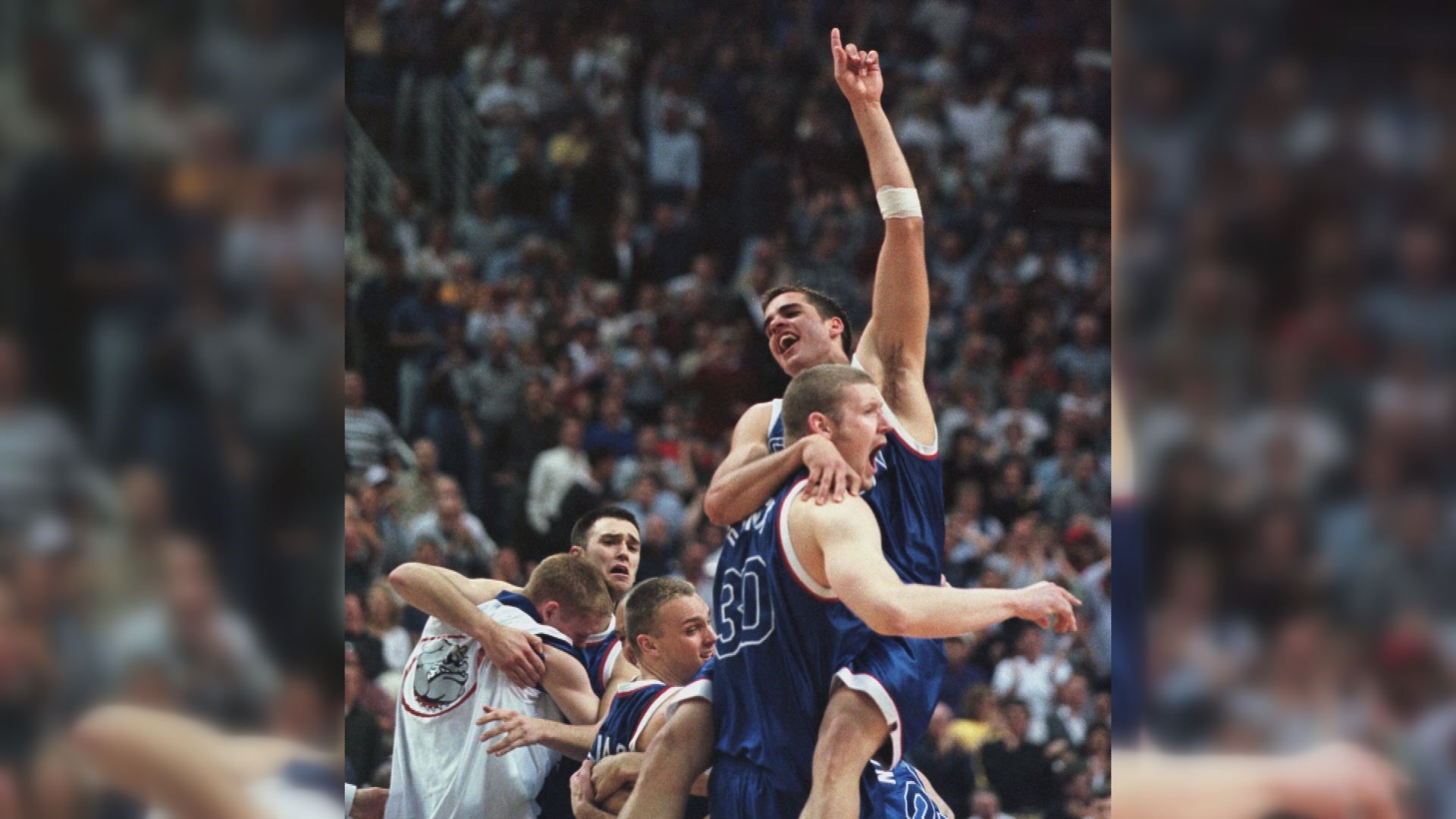 SPOKANE, Wash. — If you're a Gonzaga fan, Casey Calvary's tip in against Florida is simply required viewing. When Calvary made that shot, most of America hadn't heard of the tiny Jesuit school in Spokane-- much less knew how to pronounce that school's name. I chatted with a few of the key players during the team's original NCAA Tournament run about the moment that changed it all.

Casey Calvary, Gonzaga forward: For us, we had had a couple unexpected wins already in the tournament, but that didn’t alleviate our hunger at all. The Florida game was kind of our chance to show that that wasn’t a fluke, that we could beat another good team, that we could beat anybody that was sent out in front of us.

Mike Nilson, Gonzaga guard: Pff. Why not? We just knocked off number two Stanford. Why not knock off Florida?

Eric Edelstein, Gonzaga TV student play-by-play voice: There was just a wonderful, dumb ignorance to it of like, “Why not us? Why not?”

Nilson: Back in the day everybody had the Cinderella, my ass t-shirts running around. Definitely times have changed with that. I don’t think anyone’s calling Gonzaga Cinderella anymore.

Matt Santangelo, Gonzaga guard: We played with a big chip on our shoulder that really equated to the meaning of that shirt. Cinderella, my ass. Gon-zah-gah, my ass. It’s Gonzaga, come on.

Santangelo: It was not the play that we ran. We drew up a different play in the huddle. If you watch the play, Quinten Hall gets the first pass from out of bounds. I’m coming off the weak side and the ball is supposed to come to me so I can try to make a play.

Calvary: I was pretty sure I was not going to get the shot. Coach Munson told me, and told everybody, get the rebound or get a foul trying so as Quentin was penetrating I was 100% sure that ball was going up so I started crashing the glass.

Santangelo: Good ole Quinten Hall, he’s not known for his listening skills. He got the ball and he decided to go make the play. Obviously, it turned out wonderful.

Edelstein: Casey Calvary, he is the most mellow, wonderful soul off the court. But on the court, Casey would run through his own mother to get a rebound.

Calvary: The Florida guys didn’t block me out, so I got a hand on the ball. I’d never say that was a controlled tip. Maybe a little bit of chaos in there. It hit the back rim and then off the glass and bounced in.

Nilson: It’s the most ugly, beautiful shot I’ve ever seen in my life.

Nilson: It was so fun. Just everyone hugging each other. I think you have Richie Frahm kissing Casey, which was so funny to see. Those are two guys that you would never see them doing that any other time ever in the history of their life but in that moment it just seemed right.

Edelstein: I think I just ran onto the court and started hugging my sweaty friends. It got weird.

Calvary: Rich planting a couple big kisses on me. That’s the brotherhood of Gonzaga basketball.

Santangelo: Munson comes in to the locker room. Here’s the head coach, he’s supposed to be composed and have a plan and know what to do. He comes in and he’s rubbing his hair. He goes, “We gotta… We gotta.. I don’t know what we gotta do, but we’ll figure it out later!” We were kind of making it up, no we weren’t kind of, we were making it up as we went.

Credit: ASSOCIATED PRESS
Gonzaga coach Dan Monson provides direction to his players in their game against Florida at the NCAA West Regionals in Phoenix Thursday, March 18, 1999. Gonzaga won 73-72 in an upset that sends the Bulldogs to the regional championship round Saturday. (AP Photo/Michael Conroy)

Calvary: We went back to the hotel. I remember jumping in the hotel pool with our uniforms on. Then media came, and we didn’t want to get out of the pool so we did the interviews in the hot tub that particular night.

Nilson: It was just such a cool time because we were just in the moment. Every hour something cool was happening that we could just enjoy. It was never like, “What about tomorrow? What about next week?” It was just in that moment we were all in the hot tub. We just were present. It was really fun. I didn’t realize how crazy until looking back on it. We got a reporter to interview us in the hot tub. That was kind of cool.

Calvary: The Florida athletic trainer staff wore Gonzaga shirts the next summer to motivate them. To see the impact our plays and the things that we did had on other teams as well was a different perspective.

Nilson: I think it does go to show you, when you have a group of individuals that play for each other and that let it fly and really leverage all of their strengths to be able to cover up other people’s weaknesses, that I think great things can happen. I’ve been a part of a lot of special teams throughout my whole life whether that’s in sports, in business, in family and that was a really special group of guys. The whole squad all were so different. I look back and they’re not guys that I would necessarily choose to be best friends with, but I just have the upmost respect for them. Then when we got on the court maybe not always like the guys but always love them or respect them. I think that’s kind of cool where you can be part of situation where not everyone has to be a clone, not everybody has to be scorer or be a blue chip player. I think anything’s possible once you check your ego at the door and you play for the name on the front of your jersey and not the back of it.

Calvary: Just the best feeling you’ve ever had in your life, multiplied by 10. No thoughts at all, just the elation and the thrill of victory. I love competition so much and there’s nothing as much fun as winning and winning in that fashion. That’s the ultimate. It’s awesome.

Nilson: When I look back on the highlight of my career, it’s kind of cool to know that it wasn’t even a time when I was playing. I think that goes to show how special that team was, how special the players and the people

Calvary: The uniqueness of Gonzaga’s run is what sets us apart. There’s a lot of teams that make an Elite Eight or a Final Four run. I mean there’s teams that even go and win a national championship, but eventually they seem to have a drop off. We just haven’t had that yet. We’ve just been steadily getting better for two decades. I think that speaks to the work that the coaching staff puts in, the support that the school has given to the athletic department. I mean if Spokane wasn’t an awesome place, we couldn’t build this here. We just couldn’t. Kids wouldn’t want to come. I think all of those things put together has made us be able to sustain it. That’s what’s made Gonzaga’s run different. We’ve sustained excellence. We’ve built a national brand out of a couple of good years. Good on the coaching staff, good on the fans, and good on the players for continuing this all of these years.

Edelstein: It was like the Big Zag in the sky who oversaw everything was like this is how we’re going to start.

RELATED: 'By golly, we did it': An oral history of Gonzaga women's basketball's Sweet 16 win in 2011

RELATED: 'Everything happened in slo-mo': An oral history of Jordan Mathews' three against West Virginia