The ruling struck down the law against controlled substance possession because it didn't require prosecutors to prove defendants were aware they had drugs on them. 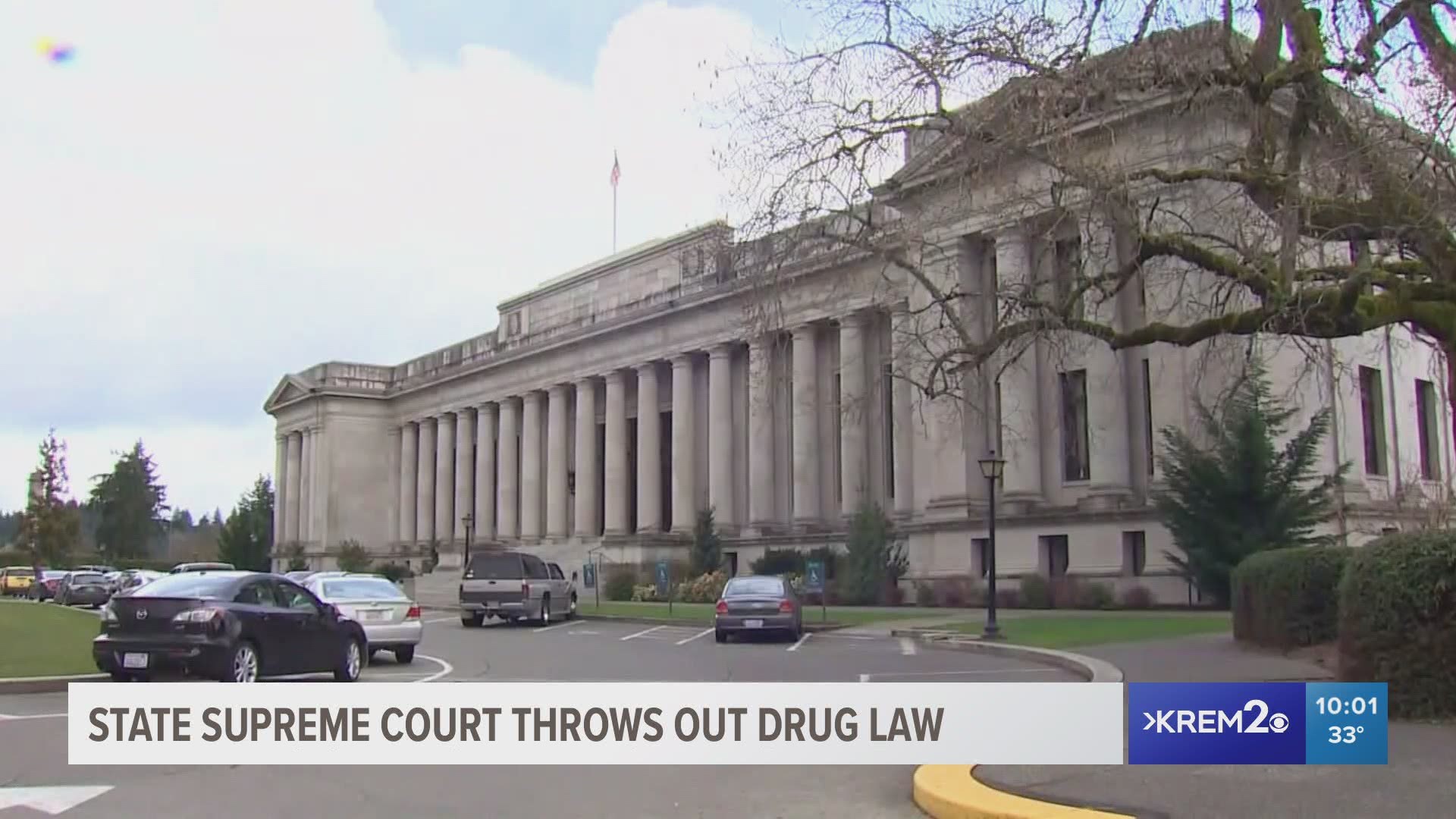 SPOKANE, Wash. — The Spokane Police Department can no longer make arrests for simple possession of drugs after a bombshell ruling this week from the Washington State Supreme Court that effectively decriminalized possession of small amounts of controlled substances.

The majority ruling decided that Washington's existing controlled substance possession law was unconstitutional because it does not require prosecution to prove that defendants were aware they possessed the drugs.

In other words, under the law, if someone borrowed a backpack from a friend which unbeknownst to them had heroin in it, they could still be charged with felony possession. The court ruled such a charge would violate due process, and invalidated the law.

That means there is currently no law on the books in Washington that makes possessing drugs for personal use a crime.

"As of today, our guidance is that we will still seize [controlled substances] as contraband, but there will not be any criminal sanctions," he said.

Meidl also says there are laws against public alcohol or marijuana consumption, since possession of those substances is already legal in Washington, just not their public use. But other controlled substances were illegal to even have up until now, so there was no need for a separate law against their use. With the possession law struck down, the ruling also calls into question whether arrests for public drug use can be made.

"If [there is] a 21 year old... with a baggie of heroin, and an officer goes by, he can't do anything with the heroin. But for the 19 year old with an open container of beer, that's a misdemeanor," said Meidl. "It's just an interesting position to be in."

In response to the ruling, charges for possession have already begun to be dropped by prosecutors across the state. That means some people who are in jail on such charges alone have been let out.

"Usually within about 24 hours they're released," he said. "So you're not going to find our jail is full of people with only possession of controlled substances charges. It's just not there."

There are also myriad retroactive impacts this decision could have, according to Richard Lechich, an attorney for the Washington Appellate Project, which argued successfully before the court. The ruling may mean, for instance, that people in prison solely on possession convictions could be released. Those with possession in addition to other charges may be able to get their sentences reduced. And people who have lost certain rights, such as voting, because of felony possession convictions may have a shot at getting those rights restored.

Given the recentness of the ruling, however, a lot of the longer-term implications remain unclear.

Buying, selling, or manufacturing controlled substances remains illegal. So too does possession of such substances with the intent to distribute them. That's because those were made criminal by separate statutes, ones that were not struck down by the court.

One way to clear up uncertainty would be to pass a new law, one that makes possession illegal but meets the constitutionality standard set by the court, by requiring prosecutors to prove defendants were aware they possessed drugs.

For years Washington has been, in effect, the only in the country without such a law on the books. Every other state, and federal law, has either mandated such proof directly in the statute or it's been later interpreted by courts to be implied in the statute. Washington's courts have historically declined to make such an interpretation.

But there are roadblocks to drafting a replacement law.

For one, the deadline for new bills to be introduced in Olympia has basically already passed.

"There are procedural ways to get around that, but the longer you get during session, the more bipartisan the agreement needs to be," said Sen. Jamie Pedersen (D-Seattle), who chairs the Senate Law and Justice Committee.

Such agreement may be uniquely challenging this year, as plenty of legislators have previously expressed interest in drug decriminalization anyway. So, it's unclear whether there's even enough political desire in Olympia to replace the law.

"I wish I could say I'm sure it would happen," said Sen. Mike Padden (R-Spokane Valley). "In previous legislative sessions I could probably say that, but this one I don't know, given the direction that the House and Senate have gone on some other issues."

Meidl says if lawmakers can't get a new law passed this session, they should consider calling for a special session to avoid waiting until 2022 to make possession a felony again.

"If we are serious as a state about not legalizing drugs right now, then I would propose that this is worthy of calling a special session to get this fixed, if there is that political willpower by the legislators to do that," he said.