Defund, disband or abolish the police: What's the difference?

Weeks of protests across the country have caught the call of "defunding police." But what does that term mean? And what does it not mean? 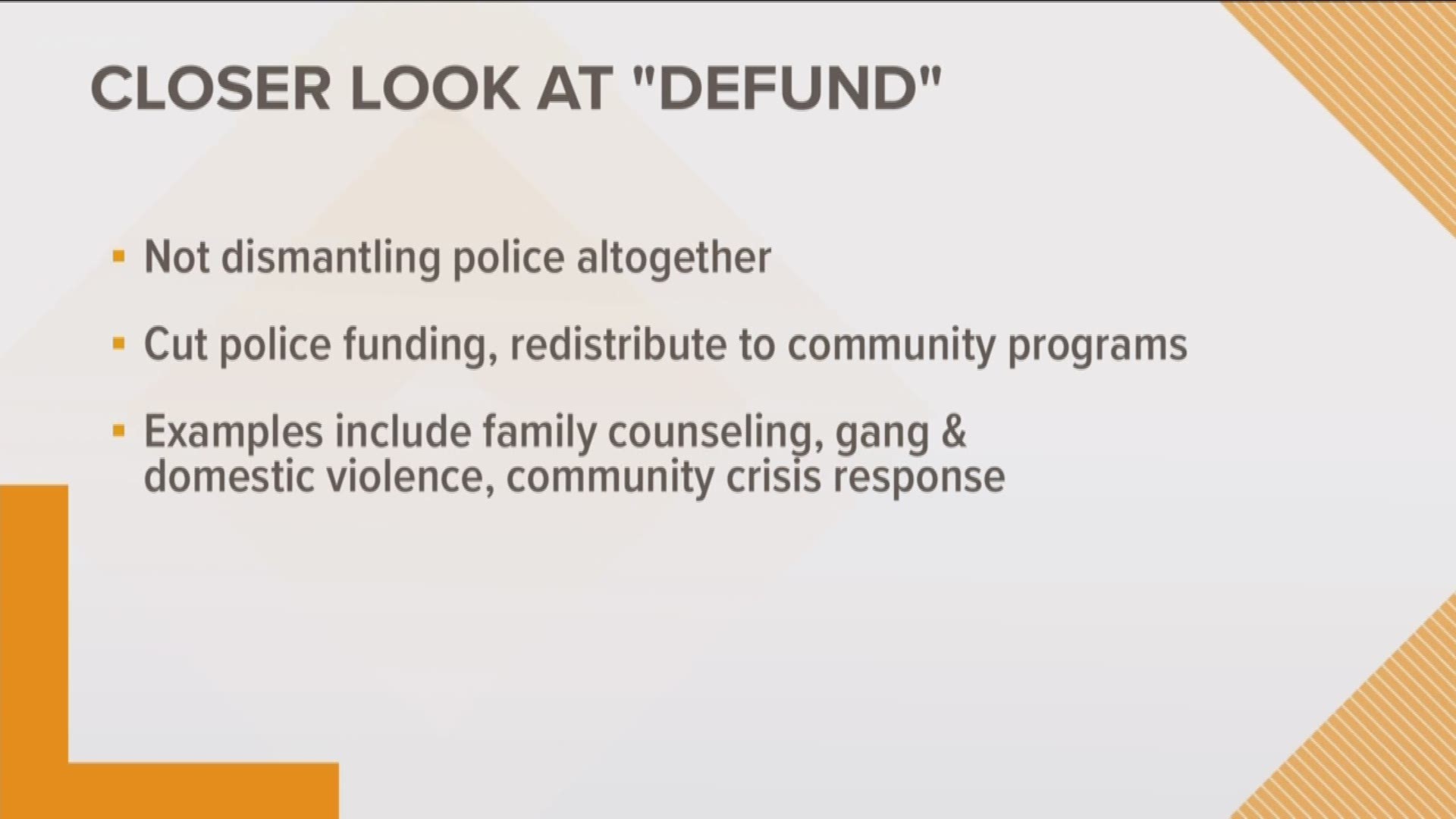 SPOKANE, Wash. — Protests both in and beyond the Inland Northwest will likely continue well into the future, with no clear end date in sight.

One of the most common themes called for among protesters is the defunding of local police departments or other law enforcement agencies.

But the term "defund" police is widely misunderstood, especially when it's compared to other, more extreme ideas that have also been seen across the United States.

Here is a closer look at each of the three most common terms in the ongoing conversation surrounding police reform: defunding, disbanding and abolishing.

The term "defund" for police reform is the most recognizable term of the three, mainly because it's the call directly from the Black Lives Matter organization. Each law enforcement group that undergoes this type of reform would make their own specific plans for their department and the communities they serve, but overall the basic concept is not that a law enforcement group would be dismantled or eliminated.

Most calls for "defunding" include a cut to local law enforcement budgets, followed by giving those freshly available funds to local community programs —  like organizations dedicated to family counseling, gang and domestic violence, or community crisis response.

The move also frees up police from being tasked with these same responsibilities, allowing them to focus more specifically on tasks that counselors, social workers, or crisis response specialists would be improperly equipped to handle.

"Disbanding" police is a much more extreme call being made by protesters than "defunding," since it basically represents a restart for law enforcement groups.

Generally speaking, a call to disband means a police department, sheriff's office, or other law enforcement group could shut down altogether, and start over with new protocols, training plans and structures in place.

Even though the call for disbanding police is much more rare than defunding police, there is one example of an east coast city where the plan has reportedly shown major improvements.

Over the next year, the entire Camden County Police department was laid off, before city and county leaders overhauled the training program to focus on "community policing."

With a new plan in place, the county rehired 40% of their staff, and since that day, the department reports an 85% drop in excessive force complaints.

The Camden County Police Chief also joined protesters front and center on May 30th, during Camden's own Black Lives Matter protests, showing a unity with the people of Camden that wasn't possible before their own disbanding effort took place.

By far, the most extreme option in any police reform is the idea of "abolishing" a police department altogether.

After a police department or sheriff's office is abolished, the plan generally calls for those funds to be given to community service groups.

The idea comes with it's fair share of controversy, as many protesters don't see it as a feasible, short-term option for any community to undergo healthily.

But protesters within Black Lives Matter organizations across the country view the idea as a "goalpost" or an "ideal to strive for," saying any community that is truly, authentically healthy should be able to govern and police itself.

RELATED: VERIFY: No, Hitler didn't call for defunding the police