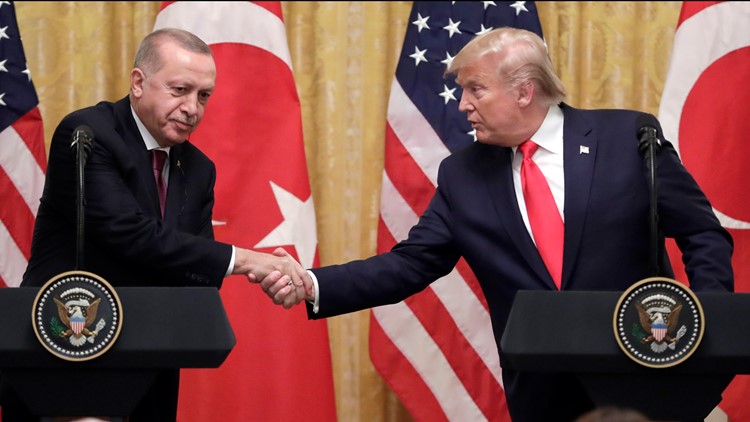 WASHINGTON — Turkish President Recep Tayyip Erdogan and President Donald Trump met as relations between the NATO allies are at their lowest point in decades, with Turkey rebuffing the U.S. and turning to Russia on security issues and Ankara facing a Washington backlash over attacks on Syrian Kurds.

Erdogan and Trump had a difficult agenda Wednesday that included Turkey's decision to buy a Russian air defense system, its attack on U.S.-allied Kurdish forces in northern Syria and other disputes that threaten a proposed $100 billion trade deal.

Their scheduled afternoon news conference, following a meeting with Republican lawmakers at the White House, gave Trump a stage to counter the first public hearings in the House impeachment inquiry.

Turkey’s president said his country was ``hurt deeply’’ by a House resolution that recognized the century-old mass killings of Armenians by Ottoman Turks as genocide.

The move was a clear rebuke to Turkey in the wake of its invasion of northern Syria.

President Recep Tayyip Erdogan said at a White House news conference that the House-passed measure has the potential to cast a “deep shadow over our bilateral relations.”

Historians estimate that up to 1.5 million Armenians were killed around World War I, and many scholars see it as the 20th century's first genocide. Turkey disputes the description.

Erdogan says decision-makers about an event 104 years ago should be historians, not politicians.

Trump notes Turkey has been a critical U.S. ally for decades and cites the economic upside to the relationship as a reason to overcome the differences. Some lawmakers say Erdogan should never have been invited to the White House in the first place.

Last month, the House overwhelmingly passed a bill to sanction senior Turkish officials and its army for the military incursion into Syria to fight the Kurds. Erdogan sees Kurdish forces in Syria as an extension of a separatist Kurdish group that's been fighting inside Turkey since the 1980s.

"This is not the time or place to be extending hospitality and exchanging niceties with a dictator," said Sen. Jeanne Shaheen, a New Hampshire Democrat who sits on the Foreign Relations and Armed Services committees.

In the Senate, two Democrats introduced legislation denouncing Turkey's targeting of journalists, political opponents, dissidents, minorities and others. They said the Turkish government had imprisoned more than 80,000 Turkish citizens, closed more than 1,500 non-governmental organizations on terrorism-related grounds and dismissed or suspended more than 130,000 civil servants from their jobs.

In October, Trump moved U.S. troops in Syria out of the way of invading Turkish troops, a decision that critics said amounted to abandoning America's Kurdish allies to be attacked.

"It has upended what was an oasis of stability, damaged U.S. credibility and standing on the world stage and strengthened the hands of Russia, Iran" and the Syrian government of Bashar Assad, Shaheen said.

Trump administration officials have said the president told Turkey not to invade Syria. But when Erdogan insisted, they say Trump decided to move 28 Green Berets operating on the Turkey-Syria border so they wouldn't be caught in a crossfire between Turkish-backed forces and the Kurds.

A State Department official said Trump is not rewarding Erdogan with a White House visit but is conducting diplomacy. The official said high-level consultations are needed because of the volatile situation in Syria that has displaced tens of thousands of people.

"There has been a callous disregard for civilian lives, including attacks on residential areas," said Margaret Huang, executive director of Amnesty International USA. "Over 100,000 people have fled this offensive and there are fears that the displaced are not getting access to food, to clear water, or to medical supplies."

She said Trump must send a message to Erdogan that these actions and unlawful behavior must stop and that those responsible be held accountable.

A senior State Department official said that the U.S. is following up on reports of human rights violations and indiscriminate killings. The official was not authorized to discuss the issue publicly and spoke only on condition of anonymity.

The U.N. High Commissioner for Human Rights has urged Turkey to investigate reported cases of summary executions committed by a Turkish-backed armed group in northern Syria. The U.N. cited video footage showing fighters with the Ahrar al-Sharqiya armed group filming themselves capturing and executing three Kurdish captives on a highway in northern Syria.

The State Department has looked into these killings and has asked Turkey to investigate. The Turks have told the U.S. that the Syrians have set up a commission, the official said, but it's unclear what, if any, action the panel will take.

Turkey reached truce agreements with Russia and the United States last month that halted the incursion and forced Kurdish fighters to retreat from Turkey's southern border. But Erdogan claims the Kurds have not vacated border areas and says he will give Trump a list of attacks carried out by Mazloum Abdi, the commander of the U.S.-backed Syrian Kurdish-led force.

On the U.S. side, Trump will be expressing continued concern about Erdogan's purchase of the Russian S-400 air defense system. The U.S. and fellow NATO nations say the S-400 would aid Russian intelligence and compromise a U.S.-led fighter jet program.

The U.S. has since kicked Erdogan out of a multinational program producing components of America's high-tech F-35 fighter jet. In response, Erdogan attended an annual Russian air show this summer in Moscow and expressed interest in buying the latest Russian Su-35 fighter jets.

Trump has not yet decided whether to impose congressional sanctions on Turkey for the S-400 purchase.

During his visit, Erdogan will be trying to get Turkey back in the F-35 program and also try to end an ongoing prosecution against a major Turkish bank, said Max Hoffman at Center for American Progress. Halkbank is accused of carrying out a scheme to evade sanctions against Iran by moving billions of dollars of Iranian oil revenue illegally.

Birol Baskan, a scholar at the Middle East Institute, says Turkey needs the U.S. on its side to balance Russia and Iran's interests in Syria. "The problem is, the U.S. seems not to be interested in doing that," Baskan said.