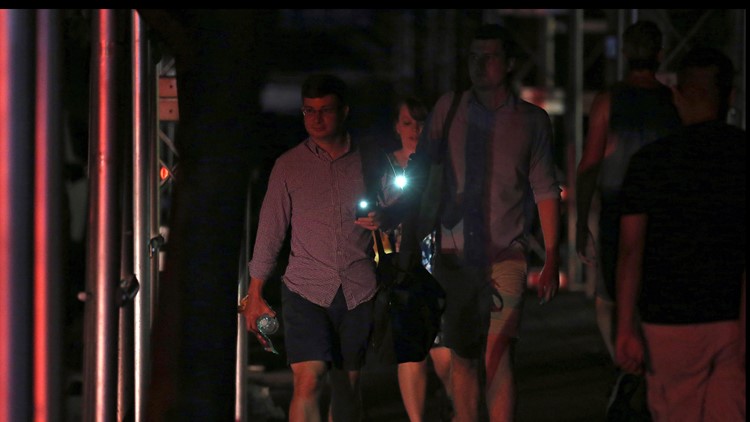 Photo by: AP
Commuters use their phones as flashlights during a widespread power outage, Saturday, July 13, 2019, in New York. Authorities were scrambling to restore electricity to Manhattan following a power outage that knocked out Times Square's towering electronic screens, darkened marquees in the theater district and left businesses without electricity, elevators stuck and subway cars stalled. (AP Photo/Michael Owens)

Show must go on: Unafraid of the dark, Broadway performers play the streets in New York power outage

NEW YORK — The power outage in New York City on Saturday may have killed the lights in Manhattan, including Times Square's famous brights, but that didn't stop several of the night's Broadway performances from keeping their shows alive.

Social media videos showed performers from the famed city street's venues doing random, impromptu shows outside. The artists kept fans happy amid the blackout, which affected more than 44,000 customers and happened on the anniversary of the 1977 outage that left most of the city without power.

Even Jennifer Lopez couldn't perform in her hometown Madison Square Garden. J. Lo, still Jenny from the Block posted a video apologizing to her fans.